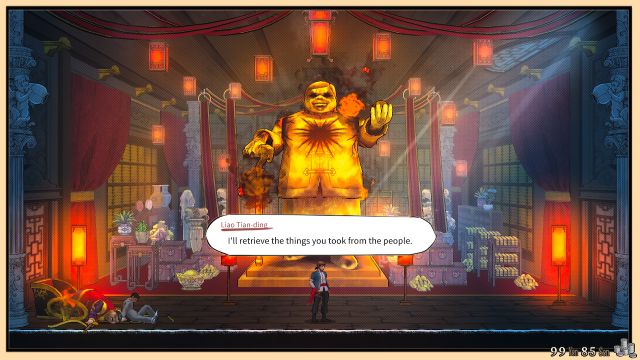 The Legend of Tian Ding: We analyze a crazy fusion: that of a Robin Hood from Taiwan who undoes wrongs in a beat’em up with a comic book soul Apparently, Liao Tian Ding was the “Robin Hood” of Japanese-occupied Taiwan in the late 19th century. One of those real characters to whom the collective ideology owes so much that he has given a lot of himself in the form of orchestral works, dance suites and who knows how many more things with his adventures. Turned into an Asian lore who works great on screen, their adventures now return as a standalone video game. This man could not imagine it when he practiced Kung Fu to liberate his homeland, but it has happened, and we rejoice.

The Legend of Tian Ding quickly puts the green check on one of the most important facets for a humble but ambitious game like this. It reminds us more of the venerable Comix Zone for Mega Drive or the adventures of Tintin in his natural environment, the visual section of him is taken care of with the care of those who know that he has hit the mark. The idea of ​​a game that draws itself – we even listen to pencils on paper – has been used to perfection to paint a vibrant Taipei that you like to walk through. But the visual presentation does not only stand out while we play: it does it even more in a cutscenes with a delicious visual style, which end up putting us in this world of Taiwanese comic that takes itself little seriously. The story accompanies, because he is also an unpretentious comic with his terrible bad guys -somewhat reckless oppressors-, his magical forces that came out of nowhere and that of the hero who helps the people by annoying the invaders. Thanks to these elements and to a music that never tires of us listening to pentatonic scales and traditional instruments, the game exudes charm and charisma beyond any doubt. Without a doubt, these are your best weapons.

The point is, the adventures of this lovable outlaw have been summed up in a game designed to be completed in a couple of moments. From the first punch, it makes it clear that we are facing an action and platform title that does not bother to deny the comparison with Guacamelee !, although this is not an easy task since we are talking about an almost perfect title when it comes to distributing smacks mixed with platforms . The fact is that, along with the artistic side of him, this is the other facet in which our vigilante from Taiwan does almost everything right. The combat is easy to learn, the special techniques make it an instant enjoyment, and the platforms – somewhat simplistic throughout the entire campaign – work perfectly as a complement to the cakes. The obligatory novelty is Liao Tian Ding’s red sash that allows us to steal his weapons from enemies, a resource with which the action always feels varied and to some extent unpredictable. From what has been said, now it would seem that we are facing the new Guacamelee! 2, but the reality is that this title does not manage to assault, in our opinion, the highest levels of what is happening right now in the independent scene in 2D, which by the way is going through another of its sweet moments this year.