Home Entertainment The legacy of Hogwarts: 10 things Fans Want to do, according to... 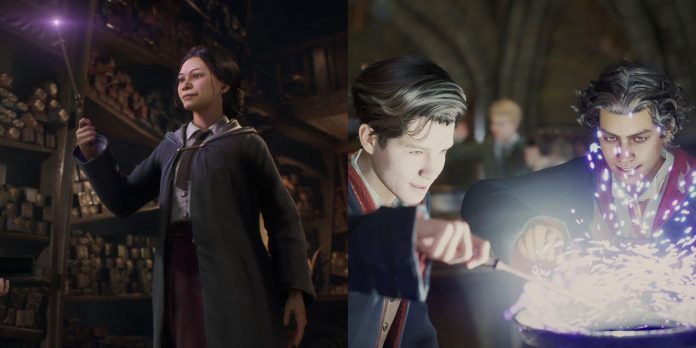 With the Q4 release of Hogwarts Legacy creeping ever closer, fans are having to rely on accidental developer leaks to gain any more information they can about the upcoming Harry Potter RPG. Since the combat and world-building already look like they’ll be spot on, fans are turning their attention to the smaller details that could make the game a classic.

That’s why fans on Reddit spent time discussing what small activities they’re hoping to be able to do when the game finally arrives in the holiday season. These were some of their favorite ideas for things they’d like to do in Hogwarts Legacy.

Hogwarts Legacy looks to have plenty of action and intrigue, but fans are also excited about seeing how the game portrays the more mundane aspects of life at Hogwarts. Redditor Da-vinci44 was just one of the fans who want the game to have the true “Hogwarts experience,” which includes the more ordinary aspects like being able to “follow classes and maybe do O.W.L.S”.

It definitely wouldn’t be the first RPG to let the player experience education and take tests, with games like Bully and the Persona series just some examples of how it can be smoothly incorporated into the game experience. Along with the teachers at Hogwarts almost always being fun to be around for one reason or another, learning magic the normal way is an appealing prospect.

The ability to decorate a space to a player’s liking is one of the simplest ways that a game can win over players and the appeal of this kind of gameplay is all the more potent in as distinctive a world as Hogwarts. That’s why Redditor prink34320 was voicing a popular opinion when they commented “I’d like to decorate my part of the dorm.”

With the world of Harry Potter already so colorful and fleshed out, the idea of using objects in the game to create a space that reflects the player’s own character is all the more appealing. Not everyone agrees with the way Hogwarts is run but it could certainly work to the game’s advantage here.

Wands make up some of the most iconic and powerful items in the Harry Potter universe so it’s no surprise fans want the option to customize theirs to their own liking in Hogwarts Legacy. Redditor rodsmp68 summed up fans’ feelings in this area by saying they want to “choose the type, The core and maybe put drawings on it.”

They also compared it to how guns work in Red Dead Redemption 2 and lightsabers in Star Wars Jedi: Fallen Order, which basically gave the player free rein to craft their own weapon in terms of both aesthetics and practical details. It may not be possible to have the same amount of options for wands, but the more customizability the better, as far as fans are concerned.

The Hogwarts Legacy official FAQ has confirmed that flying races and broomstick lessons will both feature in the game but the lack of any explicit mention of Quidditch has left fans doubtful over its inclusion. Some haven’t given up on the idea of Quidditch appearing in some form, however, with one Redditor saying “I would love to at least go watch Quidditch games or play a mini-game of it.”

A fleshed-out Quidditch sim may be out of the question at this point but the sport is still a fundamental part of the Harry Potter universe so it’s no surprise fans want it to appear in some form. Whether enjoyed as a spectator or as a player in a stripped-back version of the game, Hogwarts Legacy wouldn’t feel complete without the simple thrills of the sport.

Hogwarts is a school full of mystery and, just like any student would, fans want to explore after curfew and gain access to the dangerous areas where students aren’t supposed to go. Redditor fantastiko00 thinks the Hogwarts Legacy developers should look to previous Harry Potter games for inspiration in this department.

They say they “loved the stealth elements from the old games when sneaking out at night” and that “something along those lines” would be much appreciated by players. It would also add another interesting mechanic into the mix that Hogwarts Legacy has a chance to improve on compared to previous Harry Potter games.

Get To Know The NPCs

The Harry Potter books and movies are full of distinctive characters including the iconic teachers and unforgettable side characters and that’s why fans wouldn’t be pleased if the game didn’t put in the same kind of effort with the NPCs. Redditor Depressive_player made it clear what fans wanted in this department.

According to them, the best thing would be getting to know and “recognize the students and villagers” and nothing would be worse than “generic and static NPCs”. RPGs have historically gotten away with copy-and-pasting NPCs and using them for exposition rather than as characters in their own right but fans want NPCs they can come to know personally in Hogwarts Legacy.

Soak In The Atmosphere

As a Harry Potter RPG, Hogwarts Legacy automatically has an advantage over all other games in the genre and that’s that there already exists a rich fantasy world for it to draw from. Redditors like M2wice hope the game can get the environment of Hogwarts right so that they can simply “stand in one place for several game hours watching all the different things happen around me”.

It seems people-watching and listening in on NPCs’ conversations are on the to-do lists of a lot of Harry Potter fans going into Hogwarts Legacy. Video games have attempted to recreate the atmosphere of Hogwarts before, but Hogwarts Legacy’s larger scale and budget give it an unrivaled opportunity to create a version of the world players want to live in.

One element of Hogwarts Legacy that has intrigued fans is the idea that some students at the school can be befriended and become companions on the player’s journey. For Redditor Elden-Cringe, simply the idea that they can “talk to my companions” is enough to get them excited for the upcoming game.

The marketing for Hogwarts Legacy makes it clear that these companions will be a key part of the game and that they are seemingly fully-realized characters who will open up to the player as the game continues. Just the idea of building that bond is one that excites a lot of fans.

One thing revealed in the Hogwarts Legacy gameplay reveal in March is that it will be possible to make plenty of potions of different types and that they’ll form a key part of the gameplay, especially combat. This is something that Harry Potter fans have always wanted to see, with Redditor -Scheme- saying that an “in-depth potions system” would be an amazing addition to the game.

Employing potions in combat may be one of Hogwarts Legacy’s bigger thrills, but it’s the simple pleasure of properly following a detailed recipe, collecting ingredients, and going through the whole process of potion-making that appeals to some Harry Potter fans. With potion crafting featuring prominently in the marketing for Hogwarts Legacy, there’s a good chance that this will be realized.

Showing one’s superiority as a wizard has involved some dramatic displays of power from Harry Potter characters but there’s another, more harmless way of besting other wizards that fans are hoping to see in Hogwarts Legacy. Redditors like Radica1Ky1e think Wizard Chess is a no-brainer for the game, saying “I’d like to think wizard chess is a given.”

Minigames like chess often prove surprisingly addictive when presented in the environment of a detailed RPG and, along with the added dose of magic that makes it perfect for Hogwarts, fans would be delighted to have the chance to play Wizard Chess in Hogwarts Legacy. Considering previous Harry Potter games have included the strategy game in some form, it would be a shame for Hogwarts Legacy to miss out.

Holly Bailey responded to the girl’s first reaction to the trailer...