Home Entertainment The latest season of “Better Call Saul” proves that he is better... 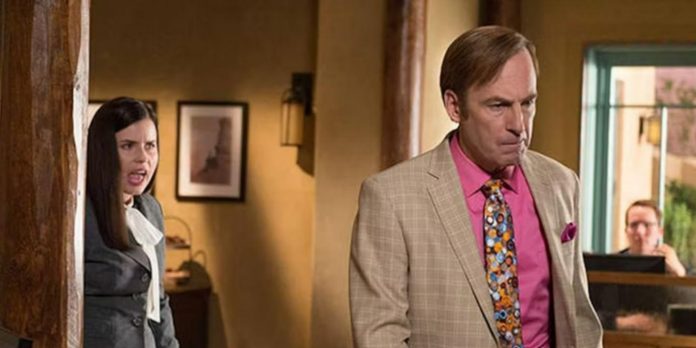 Better Call Saul is now in its final stretch as the sixth and last season winds down on AMC. The show, which is a prequel (and a sequel, in a way) to the critically acclaimed Breaking Bad, began in 2015 as a law-focused series starring the character of Jimmy McGill (played by Bob Odenkirk), who fans knew by Saul Goodman as he represented Walter White and Jesse Pinkman.

It’s been over seven years since it first debuted, and although it hasn’t received the attention that Breaking Bad had at this stage of its run, it’s safe to say that Better Call Saul has established a name for itself on its own. It works not only as a prequel to Breaking Bad, but as a self-contained show about a mild-mannered, well-meaning man whose good intentions don’t seem to get him anywhere in life, thus leading to some shady decisions and down the path towards crime and the drug underworld of New Mexico. At its heart, Better Call Saul is a character piece, far more so than the show that it’s a spin-off of. It is this focus on Jimmy and Kim Wexler (his law partner and love interest) that is highlighted the most in the final season and, therefore, the reason why this series is even better than Breaking Bad.

Although Better Call Saul hasn’t quite received the same level of attention or praise as Breaking Bad, this must be qualified with the fact that the latter only became immensely popular towards the end of its run. Its availability on Netflix was a game changer for the show, as audiences were able to binge-watch the first few seasons that they might have (or probably) missed out on when they first aired, and this made all the difference. Admittedly, Better Call Saul is also on Netflix in the U.S. and other territories and does have a strong presence there, but the impact of its streaming access isn’t comparable. Whatever the reason might be for Better Call Saul’s drop in popularity from Breaking Bad, it certainly isn’t a reflection on the show’s quality in any way.

That being said, plenty have watched Better Call Saul and most critics seem to have only positive things to say about it. The opening season in particular laid the groundwork for what was to come. There were a lot of law subplot that were interesting, but ultimately inconsequential to this fictional world made up of criminals and drug dealers. There was Chuck McGill, Jimmy’s brother, who suffered from mental illness and believed that technology and electricity hurt him, so he wasn’t able to go outside or even have a cell phone.

All of this is somewhat distant from Breaking Bad and the main focus of the show, which is Jimmy’s transformation into Saul, but it does set the stage for his turn to the dark side. Chuck was mean, if not cruel, to his younger brother who only ever tried to help him. The slightest wrongdoing on Jimmy’s part, and Chuck pounced, which resulted in a plot line where the latter tried to have his brother’s law license taken away. At that moment, Jimmy was bending the rules a little, but his intentions remained pure of heart. The story of a good guy turned bad can’t be told in a rushed manner, so as admittedly slow paced as these first few seasons were, they did show a different side to Jimmy as a character and highlighted the contrast between this version and the one fans were first introduced to in Breaking Bad. All of these sets the stage for not only the downfall of his morality, but of his life as a whole as well.

Chuck, Howard, Kim, and others all round out the ensemble cast, and they’re all focused on and given plenty to do, but it’s still a show about Jimmy McGill at heart. This has never been more evident than in season six. Nacho, arguably the main and most consistent player in the drug side of the show, was killed off early in a shocking moment. He’s been a part of the show since the first season and has always had plenty of screen time, but that Nacho was taken off the board was a clear sign right from the get go of this final outing that the writers’ focus was becoming even more honed in on Jimmy, who is more Saul than he ever has been before.

In focusing even more on Jimmy, his transition to Saul is even more tragic. Viewers who remember the first season can recall how mild-mannered he was compared to now, and how his life has been completely taken over. Ultimately, it’s a self-fulfilling prophecy of sorts, as Jimmy is rewarded with more success as he goes worse. This is the strength of the final season in particular. It not only further informs Breaking Bad, thus serving its purpose as a prequel, but continues to evolve the main character significantly more than what seemed possible at the beginning of the series.

Breaking Bad is arguably one of the best shows ever made, so the idea of a prequel, or adding to this world in any capacity, was risky. El Camino, for example, was a Netflix exclusive sequel to the original series that followed Jesse as he attempted to restart his life. Despite its potential, El Camino fell a little flat and failed to provide a concrete reason why it needed to exist. There’s virtually no character development for Aaron Paul’s anti-hero, and many viewers and critics were left with the feeling that the ambiguous, open-ended finale of Breaking Bad, where Jesse drove away in his car to escape, was more satisfying than the conclusion of the movie.

That film’s release was in the middle of Better Call Saul’s run, but the latter is the more universally loved, and for good reason. The show builds out the world of Breaking Bad, does some excellent character work, and manages to stand on its own without being reliant on cameos or references for fans to recognize. It may not be quite as popular or as fast-paced as Breaking Bad (or as meme-worthy, as the show has become a comedic internet sensation in recent months), but Better Call Saul’s final season proves that it’s far superior.

Showrunner teases the villains of the 7th series of Future Of...