Home Entertainment The Last Kingdom Season 5: Know Who Bresal Really Is, The New... 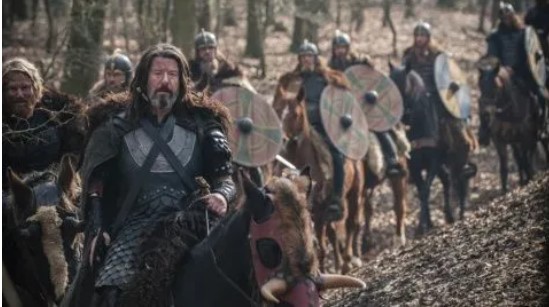 This fifth and final season of The Last Kingdom is based on books nine and ten of The Saxon Stories. As the story arc of the well-known characters draws to a close, this Netflix drama will introduce us to new faces, which will be obstacles for Uhtred of Bebbanburg (Alexander Dreymon).

As Netflix subscribers wait patiently for the official release date, production on The Last Kingdom has hinted at what’s to come. For example, a lot of details have been coming up on the Anglo-Saxon drama’s official Instagram page lately, as first-look photos of some of the new characters have been shared.

One of the most prominent additions has been that of Bresal, a man who can be seen wearing a cloak of animal skin with bloodstains on his face. This warrior was photographed alongside a quote that reads: “I think most will get carried away by his greed.”

Unlike most on-screen characters, this seems to indicate that Bresal is not based on an actual historical figure. Also, he doesn’t seem to be mentioned in the Bernard Cornwell novels either, which means that his story is specific to the fifth season plot only, perhaps the production attached him to surprise us with his presence.

For now it is not known if he will become friend or enemy of Uhtred, however, what has become more than evident is that this character will be played by actor Harry Anton, as we will remember, this star has previously appeared in EastEnders, Ransom and Wartime Crime.

Although his appearances on other shows have been brief, it is understood that his presence in The Last Kingdom could eventually become his main role. Much remains to be discovered who Bresal really is, since on the actor’s personal Instagram, he has not yet revealed anything.

However, his The Last Kingdom co-stars have welcomed him with open arms and regularly comment on his posts. His character has a beard on the show and shared before and after photos while growing a beard.