Home Entertainment The Last DC Heroes Unite for a Tribute to the X-Men in... 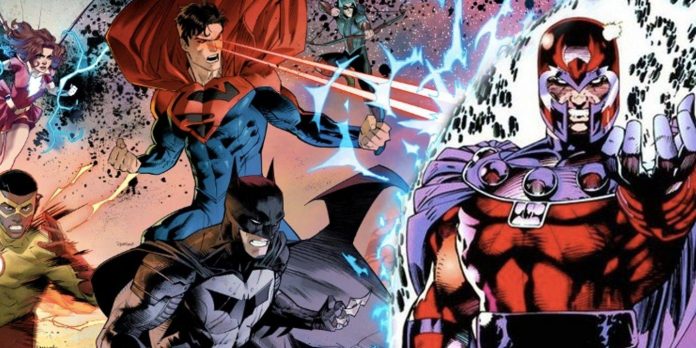 The new version of the cover of the upcoming DC Comics series DCeased: War of the Undead Gods, presented by the writer of the series Tom Taylor and illustrated by Dan Mora, is a magnificent tribute to the famous 1991 cover of “X-Men No. 1” by Jim Lee. “X-Men #1”, written by the iconic Chris Claremont and Jim Lee with Lee’s art, is the best-selling comic book of all time and marked the beginning of the legendary and controversial release of the X-Men of the 90s. Jim Lee’s bold, colorful art style became the centerpiece of the comic book aesthetic of the 90s and helped turn X-Men into one of the most popular comic book franchises of the decade, so it’s no surprise that artist Dan Mora chose this iconic cover. to pay tribute.

DCeased: War of the Undead Gods, written by Tom Taylor with the participation of Andy Lanning and Trevor Hairsin, is the third and last series of the popular DCeased comic book series on an alternate universe. DCeased tells the story of a world in which the Darkseid anti-life equation turns into a technological viral infection that spreads rapidly across the Earth and the entire universe, turning civilians, heroes and villains into terrifying zombie-like monsters. DCeased: “War of the Undead Gods” will conclude the series, which, according to the creator of the series Tom Taylor, has always been conceived as a trilogy. In the second part, DCeased: Dead Planet, the heroes of the second generation, such as Damian Wayne, Cassie Sandsmark and Cassandra Cain, returned to Earth and cured the population of the virus with the help of a Cyborg.

However, this does not mean that the rest of the universe is cured. In DCeased: War of the Undead Gods, zombie Darkseid has assembled a powerful undead army to destroy the living once and for all. The cover dedicated to Dan Mora, which Tom Taylor shared on Twitter, depicts Big Barda, Mary Marvel, Cassie Sandsmark and Wallace West battling some unknown horror, replacing the iconic X-Men team members Colossus, Rogue, Gambit and Psylocke from the original X-Men #1 cover.

To be honest, it would be quite a bold statement to create a cover version dedicated to the best-selling comic of all time, but considering how popular DCeased has been since the debut of the first volume in 2019, this tribute is not so shocking. DCeased: War of the Undead Gods is an exciting final chapter of the series because, apparently, the anti—life equation has reached the deepest depths of the DC universe, which means that iconic characters like Lobo, Sinestro and Braniac will appear. Dan Mora actually completely reproduced the classic cover of X-Men # 1, a comparison of which can be seen above, replacing Magneto with Darkseid, Storm with the new Shazam Cassandra Cain from DC and Cyclops with Jonathan Kent, brilliantly replacing Cyclops’ explosions of optical power with Superboy’s Rays of thermal vision. It’s nice to see a DC Comics artist and a popular comedian paying homage to an incredibly iconic work of art by their main competitors from Marvel Comics. This shows that regardless of the competition between the two publishers, comic book creators, writers, artists and editors can always appreciate a great work of art.

Dan More’s epic recreation of Jim Lee’s beloved X—Men #1 (1991) for DCeased: War of the Dead Gods #2 is really the perfect homage to such a classic work of comic book art, and we hope it will be available as a full version. the cover for the upcoming collection of the final DC Comics DCeased trilogy.

The Texas Chainsaw Massacre: Creepy Trailer for the Sequel to the...