Home Entertainment The Knights of Gotham CW: 9 Characters who can hurt the Show 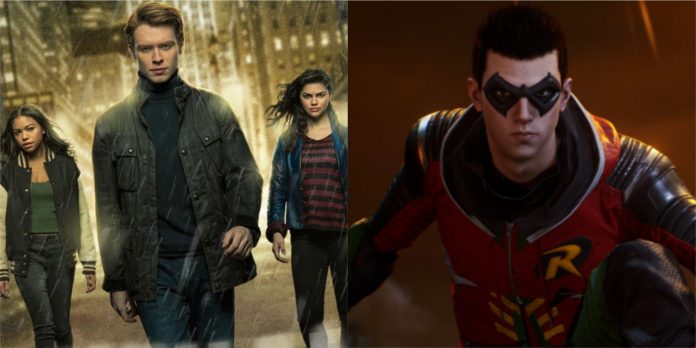 2022 will be the year for the Gotham Knights as they receive their own video game and CW series. Not only will fans be introduced to a new Robin and a new team, but the departure from the comics has led fans to doubt the success the show will have.

The show is taking a risk by relying on a new character that has to uphold the historic legacy that comes with him taking up the mantle of Robin. While it does give the writers a chance to expand on new plots and ideas, it would all be for naught if the characters aren’t relatable or compelling. The writers have to avoid a lot of things if they want this show and their characters to succeed.

Leading the Gotham Knights within the new series is the newly adopted son of Bruce Wayne, Turner Hayes. Turner Hayes is an original character made for the series, taking the place of Bruce Wayne’s sons in the comics.

Replacing previously known and loved Robins, such as Dick Grayson and Tim Drake, with a character that little known about him seems like a missed opportunity for fans of the comics. If the trailer is any indication, then Turner Hayes has the potential to be a rich child that takes everything for granted and complains throughout the series. If this is true, then the audience may need to wait a bit before he changes for the better.

Supernatural’s own Castiel’s Misha Collins is set to play Two-Face (aka Harvey Dent). This version of the character will start off the show as a hero before eventually transitioning into the villain that determines life and death with a flip of a coin.

Plenty of Two-Face comic books to read before Gotham Knights will have fans know that the district attorney is one of the best antagonists in the Batman comics. The villain has a rich history with Gotham’s greatest hero, and an interesting character backstory, so it is questionable whether he can recreate that chemistry with the younger heroes.

Many actors have stolen the show by playing The Clown Prince Of Crime. His wild and destructive behavior leads to an unpredictability that keeps the viewers wanting more.

The significance of Joker makes him in a TV series not starring Batman in a dangerous position that can take away from what makes the Joker a great villain. If his “supposed daughter” Duela carries his legacy in burning Gotham to the ground, then having Joker only mentioned in the name is a safe way to keep his legacy intact.

Only true comic fans know about Red Hood and how he was hated for years before becoming the badass that is adored by fans. Fans now protect Jason as rumors of his involvement within the show had fans believing that he has been through enough torture.

Jensen Ackles returning as the character would be nice to see, but the chances of using the character as a source of drama would go back to the changes that were made in the character’s growth. Red Hood is loved for how he is depicted in the comics as once again trying to become a true hero and any changes can damage that character.

The daughter of Cluemaster, she is a master of sarcasm, brain teasers, and combat. As Spoiler, she battles against her father and his goal to commit evil acts.

The trick is to have writing that shows her intellect and her fighting skills. The trailer of Gotham Knights almost depicts her in a minor role as a love interest and removes her wit. If placed in that role, it can remove her of that charm that allowed her to become a fan favorite of the Bat-Family.

Although forgotten by most fans, Harley Quinn already exists within the CW Arrow universe as Harley Quinn appeared in a brief role in the season 2 Arrow episode “Suicide Squad” (and was voiced by Tara Strong). However, fans never go to see Harley’s chaotic ways in the show as her use in movies would prevent her from being placed in the show.

RELATED: 10 Actors Who Could Play Harley Quinn In Folie A Deux

Despite already having an opportunity to play a role in the Arrowverse, bringing her in now and taking advantage of her fame would do little for the show. Harley has grown into becoming her own character but would feel out of place to be put in a show with lesser-known characters.

Barbara Gordon has evolved as a character throughout since her debut. As Batgirl, she can be depicted as a crime fighter that occasionally makes jokes, while, as Oracle, she is focused on completing the mission.

She would feel out of place in a show that would focus less on heroics and more on teenage drama. In a team, she is best used in a supporting role and a team of young heroes would be a waste of a hero on her level.

The Demon’s head relationship with Batman is one of respect despite having opposite goals. In Batman Begins, his best quotes demonstrate how destructive he can be when plotting the demise of Gotham City.

If involved in the show, it would bring confusion to the timeline to when the show takes place as he appeared and was killed off in the third season of Arrow. Even if resurrected, his involvement isn’t necessary as his daughters Nyssa and Talia could take his spot as villains or reluctant allies.

As Batman is the one character that is always associated with Gotham, making it difficult to include any version of the city without him. As the show will focus on his murder and death, he will still be playing a key role within the show.

Focusing the show on Bruce Wayne only takes away focus from Gotham Knights, being a show about rising heroes taking Batman’s place as Gotham’s heroes. Relying on a dead character to carry the show can only work for so long. It will harm the show by not relying on the main cast, by making them feel like insignificant characters compared to a supporting character that has more effect on the plot. Centering the show around Batman after the mystery is solved would only prevent these characters from having the spotlight to make a name for themselves.

Logitech and Tencent will team up to create their own portable...

A new trailer for Spider-Man: No Way Home has been released!