Home Crypto The Kid Who Made Millions from Bitcoin and NFT Trading Speaks! 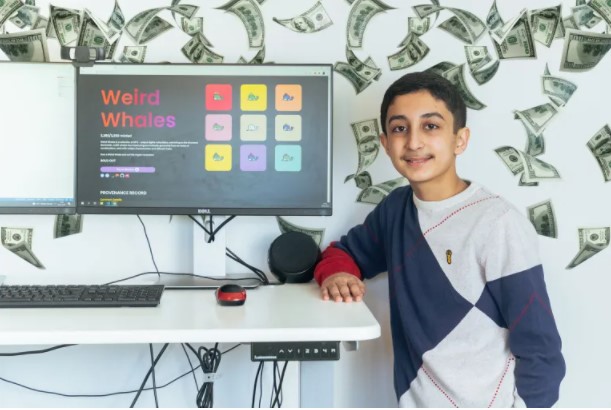 The 12-year-old crypto millionaire, who is launching a whale-themed NFT collection with the coding skills he learned from his father, shares how he noticed this trend early on.

Became a Bitcoin and NFT millionaire at the age of 12

A teenage crypto expert has earned more than three million pounds ($3.5 million) from trading NFT and Bitcoin. Benyamin Ahmed learned coding from his father when he was only five years old and instantly became addicted to it. As Bitcoin started to rise last year, 12-year-old Ahmed launched a whale-themed NFT collection. When he first released the colorful pixelated whales, he sold out within hours and earned £110,000 ($114,000). This is a fortune that, along with his other ventures, rose to £750,000 in a few months.

Since Benjamin Ahmed did not have a bank account, he could not convert his money into cash. All his wealth is in Ethereum, and according to some, it may become worthless before investors even have time to withdraw. However, Benjamin thinks cryptocurrencies are the future and does not intend to withdraw his wealth for now, as he says it is just to improve his skills and experience in the game.

So far, the NFT collection has traded a total of more than three million pounds and this continues to grow as it becomes more and more popular. Benyamin from Pinner gave the following statements about his success in his statements to the local press:

My friends at school knew what I was doing and they congratulated me. I don’t think everyone really understands this though! But now a lot of people know my story and I’m happy to see so many people are learning about NFTs because of me.

Talking about the passion that made him a millionaire, the teenager adds that he sees a “bright future” in the crypto and NFT world.

I think in every industry, digital versions of things always perform best. It has a lot more benefits and certifications with digital art – I can just jump online and see where anything comes from.

Brainy Benjamin plans to start his own business

NFTs have become increasingly popular in recent years, and interest in cryptocurrencies such as Bitcoin, Ethereum, Dogecoin and Ripple has increased this year. But as adults struggled to appreciate their value, clever Benjamin got on the train early. After buying and selling a few, he released his own NFT series called Weird Whales in July 2021. The 3,350 NFTs containing the pixel whales initially sold for $60 per piece, but demand rose quickly and so did the price. Some collectibles have sold for up to $20,000. Brainy Benjamin plans to eventually convert his money from crypto to sterling and start his own business.

Critical Day Today For These 14 Altcoins: Here’s What They’ll Be!