Home Celebrity The Kardashian family reacted to the wedding of Kourtney Kardashian and Travis... 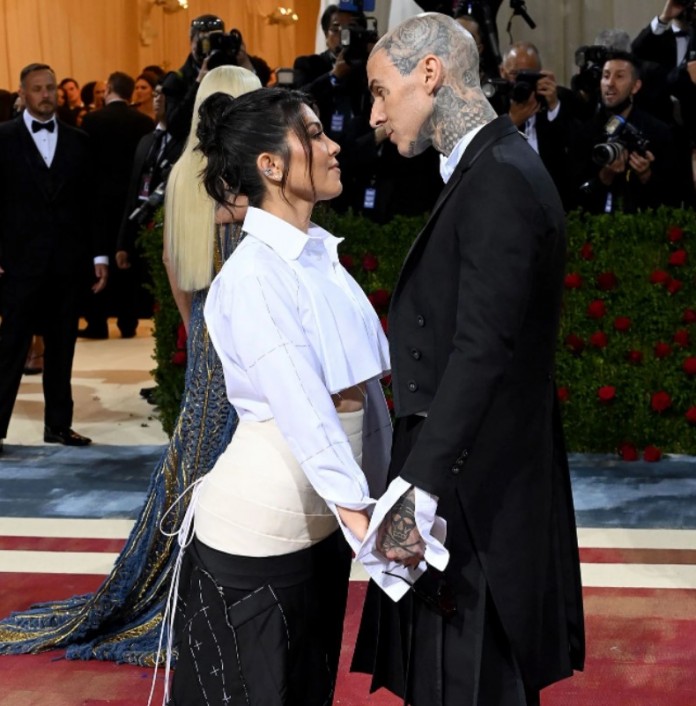 A demonstration of their support! After the wedding of Kourtney Kardashian and Travis Barker at the courthouse, the Kardashian family welcomed the musician to the family with separate messages congratulating the couple.

The 43-year-old founder of Poosh on Monday, May 16, posted on social networks a selection of photos taken on this special day. “Until death do us part,” Kardashian captioned the black—and-white photos of the newlyweds celebrating the next chapter of their lives.

In the pictures, Kardashian and 46-year-old Barker kiss after the ceremony in Santa Barbara. There were also photos of a couple leaving the courthouse in an antique car with a “Newlyweds” sign attached to it.

Kim Kardashian reacted to the Instagram post by adding a smiley face in the form of infinity in the comments section. Meanwhile, Khloe Kardashian shared photos in her Instagram stories, writing: “Congratulations.”

Family friend Simon Hack also admired the news, writing: “I love you guys.” On the same day, Courtney thanked 38-year-old Huck via her Instagram story for the cookie cake he sent for the occasion. Sarah Howard, chief operating officer of Poosh, in her response called Courtney and Barker “soul mates.”

The demonstration of support on social media comes after Courtney’s family was noticeably absent from the wedding on Sunday, May 15. California-born grandmother Mary Jo “MJ” Campbell and drummer Randy Barker’s father were allegedly present as witnesses.

The duo previously made headlines when they celebrated their love in Las Vegas, however, they did not receive a marriage certificate, so they were not officially married.

At that time, Courtney noted that she did not consider herself “fictitiously married” to a musician against the background of an important event. “There was no way to get a marriage license at that hour,” she explained during an interview on Jimmy Kimmel Live! at the beginning of last month. “We asked probably five times. “What do we need to do to make this happen?” It was 2 o’clock in the morning, and they were like, “It opens at 8 o’clock.”

The couple’s first ceremony took place almost six months after Barker asked the reality TV star a question on a beach in Southern California. Fans recently saw the ups and downs of the proposal during an episode of The Kardashians. Kris Jenner’s decision not to include Kourtney’s children quickly became a topic of conversation after the Hulu series aired earlier this month.

“There just wasn’t a chance to dial it all back then, and then, at the last minute, Courtney told Travis that Penelope wasn’t feeling well,” Jenner, 66, explained during the episode. “His children will come because they are older. And I’m not sure any of us know exactly how they will react. I think it’s her decision to tell her children about it the way she wants.”

During the episode, Courtney admitted that she did not agree with her mother’s choice after her own children got emotional that they missed the event. “I really want my children to be here. I think it would make them feel more involved in the decision and part of the surprise,” she said, clearly excited. “I know my mom made that decision, and it probably wasn’t the best one for her.”

After Courtney and Barker’s official wedding, a source told us that the couple will invite their loved ones to celebrate their wedding “in the near future” in Italy.

Scroll down to see how the Kardashians celebrated the exciting news:

Mommager replied in the comments section: “I love you 😍 “.

The 37-year-old co-founder of Good American shared this news in her Instagram stories and responded with a few hearts.

Will Jimin have a new solo?