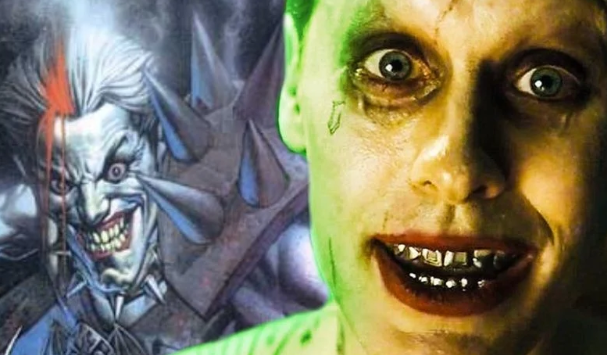 When the Joker travels to another universe and joins a powerful force, he gains a power that is too high for any live action movie.

While part of what makes the Joker so terrifying is the fact that he doesn’t possess any abilities but is still considered one of the greatest villains in the DC universe, this idea is completely turned upside down when the Clown Prince of the underworld truly becomes superhuman. After the Joker travels to another universe, he gains dark and hideously violent abilities that are too high for movies.

In “Batman/Judge Dredd’s “Die Laughing” #2 by Alan Grant, John Wagner and Jim Murray, The Joker traveled to Judge Dredd’s universe after using the multiverse teleportation belt. When he got there in the previous issue, the Joker helped a super-strong villain known as Judge Death escape from prison, and he was rewarded with his own truly sinister abilities.

Judge Death is one of the four Dark Judges within the Judge Dredd succession, beings with demonic abilities who are tasked with destroying all life in the multiverse. They went to the universe of Judge Dredd from a parallel world to fulfill their dark mission. After they were arrested off-screen, the Joker released Judge Death, and in return, the dark entity filled him with its evil energy and turned the Joker into another Dark Judge. The power the Joker gained in the process turned out to be too terrible for any of his films, as he acquired the ability to blow people’s heads off, creating a flow of blood that coincided with the hoarse sound of his sinister laughter.

The Joker’s laughter makes people explode in this comic, which is really the perfect force for the Joker, as it is similar to his deadly laughing gas, but without the need for any external weapons. In fact, the perfectly fitting power that the Joker gets after becoming a judge Joker is not accidental. The mystical process used to empower the Dark Judges gives everyone abilities based on their individual obsessions. In addition, as Judge Joker, he is immortal, since his new body is invulnerable to any attacks.

Since the Joker finds death hilarious, it makes sense that his laughter will cause his victims to suffer an incredibly horrible death. Judge Joker actually becomes so powerful that the only reason he reverts to his original form is because he didn’t know he would lose his powers when transported back to the DC universe. If he had been able to retain his abilities, then the Joker would have been completely unstoppable, even when he was facing the strongest heroes DC has to offer. While it’s certainly disappointing for the Clown Prince of the underworld, it’s actually good for his real brand that these abilities didn’t stay. The Joker is perhaps the most popular action character in the DC catalog, but with these insanely violent abilities, he will not be able to appear in so many films in any way, since this power is too high for movies.

Microsoft trying to persuade you to use ‘your phone’