Home Entertainment The Japanese cult behind these little-known anime 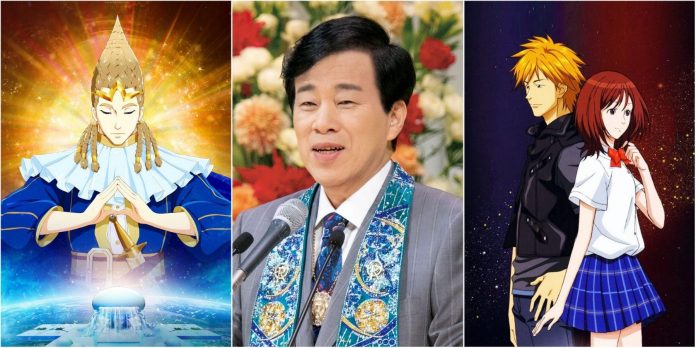 Happy Science is an organized spiritual religious group formerly known as the Human Happiness Research Institute. It’s a cult, simple and clear. But what makes this religious group push the boundaries of the cult? It’s not about strange beliefs or the number of followers; what makes the Happy Science group a cult is their manipulation tactics both outside and among the group members themselves. Their most infamous manipulation tactic? Anime.

As of 2021, they have nine full-length anime films promoting their beliefs. The history of the cult is not very long, since the group began its activities only a few decades ago, but their beliefs are incredibly complex and represent a mixture of other world religions and mythologies. However, when it comes to their anime, there are several studios that have signed contracts to create anime for them, including members of the Kyoto Animations royal family themselves.

The History of Happy Science

Ryuho Okawa was a Wall Street trader associated with Toyota Tsusho, the financial arm of the Toyota automobile company. He claims that his parents believed in both God and Buddha, but he was not active in religious activities. However, the beliefs that he formed separately from those of his parents were active; Okawa’s beliefs from a young age included unique views on spirits, souls and the afterlife. On March 23, 1981, Okawa believes that for the first time a divine spirit contacted him.

Later that year, Shinji Takahashi, the religious leader of the Divine Light Association, told Okawa that his destiny was to find a new religion that people would follow. Later that month, Okawa claims to have been contacted by Kukai, Shinran, Confucius, Jesus Christ, Moses and Nostradamus.

There are also recordings of these alleged messages where Okawa acted as a medium and a follower interviewed a spirit that Okawa claimed was speaking through him at the time. Okawa began publishing his messages with spirits over the years to prove his claims in a collection of thirteen books. Halfway through publishing these books, he switched from using the name of one of his followers as a pseudonym to publishing under his own name as the books became popular and he was able to quit his job at Toyota Tsusho.

Thus was born the Institute of Human Happiness, which later changed its name to “Happy Science”. He claimed to be many things; although he originally claimed to be deities such as Jesus and Confucius, he now claims to be the reincarnation of El Cantare, Hermes and Gautama Buddha, among others. His current wife is considered to be the reincarnation of Gaia. In general, beliefs are proclaimed positive, and the four main elements are Love that Gives, Wisdom, Self—Reflection and Progress. However, many of the content, sermons, and their own anime seem to focus on their leader no less, if not more, than their main tenants.

Their history with anime

Trying to find more ways to attract members to the Happy Science group, they began ordering anime from young anime studios that were desperate for customers. Their very first anime is Shiawasette Naani, whose title translates as “What is happiness?”. in English. What makes this particular anime special is that it is the first anime created by Kyoto Animations as a main studio. Kyoto Animations used to work on backgrounds and intermediate shots for larger studios, but this was their first work with the participation of the main studio. However, it was the only anime created by Kyoto Animations for Happy Science.

Later, various small companies produced several anime films until they created their own animation studio called HS Pictures Studio. Through this studio, they released an anthology of four films, which not only won awards, but can also be found on Tubi, a free streaming platform. Critics everywhere criticized all their films along with anime fans. After watching five movies, I can confirm a few things; there’s almost no plot in any of them, dialogue is everywhere, and the films seem to focus more on Okawa’s greatness than on the messages they want to convey. Oddly enough, they are also anti-vaccination, nationalistic, and full of manipulative recruitment tips that they encourage in films.

Many online creators, but especially Mother’s Basement on YouTube, have been covering cult films for some time. And even though those who live outside and inside Japan have ignored the films, the cult somehow gets enough money to keep producing these films, among the books, speeches and other content they produce. Although they boast of peace and happiness, their anime films are proof of their dangerous views and manipulative methods disguised as recruitment.