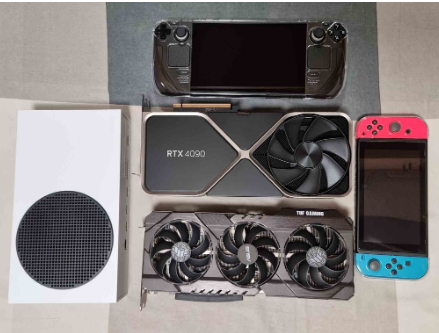 NVIDIA GeForce RTX 4090 is already available to some players. Thus, some cardholders have made wonderful posts on social networks. In fact, in terms of size, this video card is compared with some video cards, game consoles and portable devices on the market. The test results turned out to be quite interesting. So much so that the NVIDIA GeForce RTX 4090 was even bigger than some game consoles.

Here is a size comparison of NVIDIA GeForce RTX 4090 with Xbox Series X and PlayStation 5.

The graphics card is almost the same size as the Xbox Series S!

In another photo we see NVIDIA GeForce RTX 4090 facing the Xbox Series S. The video card, which in this photo is longer than the Xbox Series S, is slightly smaller than the console in width. However, in general, we can say that both products have very similar dimensions.

In another photo we see NVIDIA GeForce RTX 4090, located next to the Nintendo Switch and Steam Deck. The graphics card is larger than both portable game consoles.

Another error that infuriates users in Windows 7