Home Entertainment The Homelander Mirror Scene for Boys Is the Perfect Homage to the... 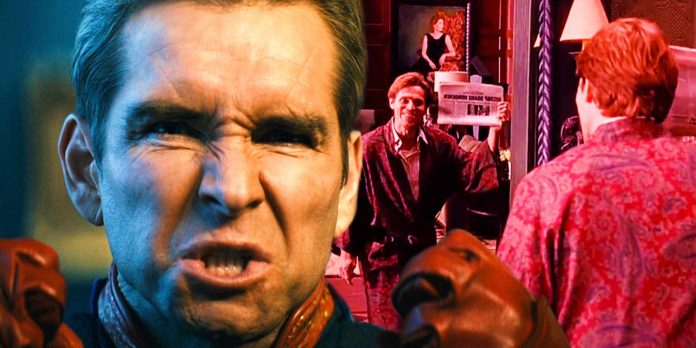 WARNING! There are spoilers ahead for the 3rd season of the 6th series of “Boys”!

The scene with the mirror of the Homelander in the 6th episode of the 3rd season of “Boys” — “Gerogasm” — perfectly pays homage to the cult Marvel villain — the Green Goblin. The Boys are well known for their shameless satire of the popular superhero genre, and the Amazon Prime series largely compares their Supes to famous comic villains and antagonists from the real world. Homelander (Anthony Starr) is the greatest example of a superhero parody in “The Boys”, since he is the face of the beloved Seven, but in fact is the most dangerous and perverted character in the series at the moment.

While “Gerogasm” was feared to become a grotesque hour on television due to its graphic sexual events, the episode “Boys” exceeded all expectations thanks to a fight with a Homelander, a Soldier, a Butcher and Huey. When The Boys went to Herogasm to find the twins, Homelander prepared to fight Boy Soldier and secure the title of the most powerful Supe, and the main villain of the series also struggled with his contradictory desire to be loved by the public. Before his epic battle with the Boy Soldier, the Homelander talks to himself in the mirror, where his “bad” reflection convinces his “good” side to move forward with his dark dictatorial need for power and control.

The mirror scene of “Boys” exposes the inner conflict of the Homelander, which unexpectedly gives the character a more human side, but in no way justifies his crimes and hostility. Rather, it suggests that the Homelander has struggled with his morals and demons since childhood, and his bad half overwhelmingly dominated the good. This is not unusual for stories about villains, but the circumstances of the Homelander mirror scene seem to be a direct homage to Marvel’s Green Goblin, the main antagonist of Spider-Man Sam Raimi (2002). As the Green Goblin gradually engulfs Norman Osborn, one Spider-Man scene depicts Willem Dafoe’s character looking into a mirror, where a good half of Norman is trying to appeal to the villainous influence of his goblin reflection.

The Homelander talking to his evil half in the mirror also perfectly pays homage to Norman Osborn’s Spider-Man mirror conversation in terms of scene composition. The Homelander stage for boys is not subtle in its reverence, as the rooms are decorated the same way and the framing is almost identical. Just like Norman in Spider-Man, the Homelander returns to his luxurious apartment with numerous portraits hanging on the walls when his evil half talks to him in a large mirror. As one of the few cases where the “Boys” try to show some sympathy for the Homelander, it was appropriate for the series to recreate the well-known scene of the inner battle mirror of the Green Goblin, one of Marvel’s most compelling and controversial villains.

Being respectful of a Marvel scene or character is pretty rare for The Boys, which shows how really effective Sam Raimi’s Green Goblin was as a villain. It was expected that the Boys would parody the scene with Norman Osborn in Spider-Man in a dark and perverse manner or make fun of her, but instead decided to use her as a proper inspiration for their most significant antagonist. The mirror scene in Homelander is actually taken from the 49th issue of The Boys comic book, which was also probably inspired by Sam Raimi’s Spider-Man episode.