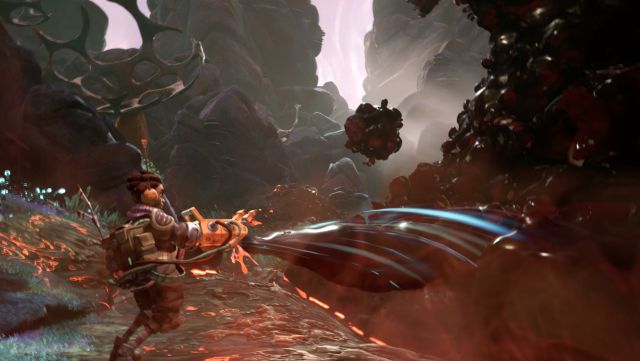 The Gunk: We travel to the ends of the universe to discover the secrets of a lush alien planet; We reviewed The Gunk for Xbox One, Xbox Series, and PC. Classic-style platform and exploration adventures receive a new exponent of the genre at the end of 2021 full of great video games. And it is that with the aim of recovering the sensations of yesteryear of titles focused on jumps, solving puzzles and certain challenges through an affable development, the creators of the SteamWorld saga -the Swedes Image & Form Games- launch their bet most ambitious to date with The Gunk, a video game now available on both Xbox One and Xbox Series X | S and PC only through the Microsoft store, with a presence from day one on Xbox Game Pass. There is no excuse to try a colorful and enjoyable adventure that stands out in some aspects and is conservative in others; Next, we take a look at The Gunk.

In the footsteps of a lost civilization

The Gunk, in essence, is a third-person adventure of exploration, platforms and some puzzles, linear in development but offering some freedom to explore relatively open environments and discover all their secrets, if we wish. All this peppered (pun intended) with the presence of a toxic substance called gunk (in English “dirt”) that is corrupting the different ecosystems of a lush alien planet. And we are part of a peculiar group of space carriers in search of valuable resources that seem to have finally found their most valuable loot on an unknown planet brimming with life. Although we will soon discover that the gunk is endangering both the planet and the remains of what seems like an ancient lost civilization …

Without revealing more than necessary, we will soon take control of Rani, one of the members of a group formed by her partner and a curious robot, whose most remarkable characteristic (beyond an innate curiosity that causes situations, at least, dangerous) is a mechanical arm capable of absorbing all kinds of resources, in addition to the gunk itself. Soon we will feel familiar with the absorption mechanics of the different gunk zones that we will find in our path, a development reminiscent of video games such as Luigi’s Mansion or the most recent installment of the Smurfs. Although The Gunk does not renounce its own personality, as we say, very marked by its old-school spirit in the genre of exploration 3D adventures.

Thus, Rani’s journey will take us to various areas of a colorful and astonishing planet (some pictures are truly amazing) and will take place through linear scenarios with somewhat more open areas in which to solve certain related puzzles or challenges. with the environment. Among them, the need to end the gunk to clean the affected areas and discover resources that we can absorb to improve the mechanical arm of our young and intrepid protagonist. In addition, we can also scan all kinds of elements to discover plants, animals, aliens and structures, all to unlock new improvements such as greater absorption force, energy shot or increased speed when moving. All this makes the gameplay of The Gunk an enjoyable and interesting experience that encourages us to keep moving forward.