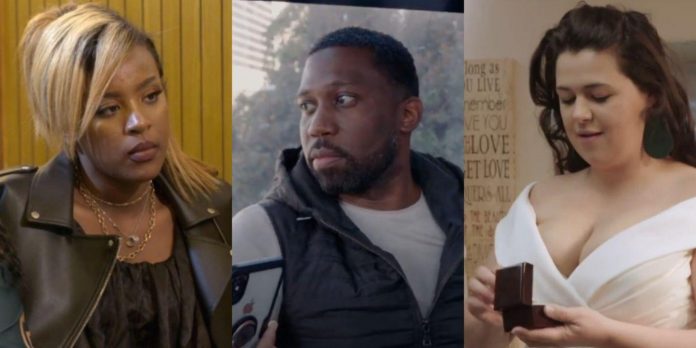 In the forever or never world of 90 Day Fiancé, love looms with an expiration date. While pressure can make diamonds from potential deportation, it can also swiftly sink a porous relationship. Season 9’s deadline lovers are far from foreign to the missteps made by mounting pressures.

Spanning the gamut of tone-deaf prenups, frozen food, and a brazen disregard for prophylactics, there’s bad company to be had in questionable decision-making. Be it self-sabotage, lapses in judgment, or outright ignorance, there’s a bounty of baffling gaffes that speak more of emotional strangers than two hearts speeding towards matrimony.

A therapist on and off duty, Jibri Bell’s mother Mahala is far from afraid to share her feelings on her son’s encroaching marriage. With Jibri and Miona living under her roof to save money, Mahala has a few rules of occupancy. One is for Miona to wear nothing form-fitting around her husband. The other is for the couple to make dinner once a week.

RELATED: The 10 Worst 90 Day Fiancé Parents, According To Reddit

After Jibri nixes Miona’s corndog pitch, the couple settles on frozen chicken alfredo. The chicken catches a barrage of insults including “really bad,” “rubbery,” “awful,” and “nasty.” After Jibri’s stepdad says he respects the effort, not the chicken, Jibri is left upset and embarrassed over their playful mocking of Miona’s kitchen prowess. If a shortcut was their only intention, a salad and a rotisserie chicken would have sufficed.

One Ruse Too Many

Bilal Hazziez is incapable of reading the room. Setting up an elaborate ruse to gauge his fiancée’s humility, Bilal takes Shaeeda directly from baggage claim to an old work van he positioned as his own. With Shaeeda seeing the van as a sign of poverty and deceit, her confusion over Bilal’s opulent online image should have been his cue to curtail the homeward half of his plan. Instead, he sped forward.

Shaeeda’s dismissal and disgust over the home Bilal grew up in/presented as theirs was inescapable. Bilal’s plan crushed any chance the couple had at fresh bliss and bled into every issue they had moving forward. Though Bilal would take her to their true home/car the next morning, the damage and distrust were already done.

Singer, dancer, and balloon artist, Kara Bass is a Jill of all trades and resident to wherever she wants to be. Bringing fiancé Guillermo Rojer to her 10-year high school reunion, Kara introduces him (and the world) to her ex-boyfriend Kris. Dressed in a camouflage black and yellow bulletproof vest, Kris radiates off-brand Post Malone energy and stands in stark contrast to Guillermo’s boyish innocence.

Kris shares heartwarming stories such as the time Kara’s mother walked in on them having sex and the fact that she cheated on him with someone in massage school. Screaming infidelities and Kara’s inability to not be controlling, Kris pried Guillermo’s eyes open to the woman she curated away from him. The doubts that would creep across Guillermo’s heart were almost certainly tied to this embarrassingly honest evening.

With 2-year-old Koban to raise and neither half of the couple able to work, Emily Bieberly and Kobe Blaise live on the Bieberly family ranch and depend on them for support. With Emily’s father David footing the bill for nearly every aspect of their lives, all he and his wife Lisa ask is that they pitch in around the farm.

Chipping away at a mound of manure in a manner akin to carving an ice block with a toothpick, Emily criticizes Kobe’s insipid shovel work and he explodes. Telling her to “STFU” in front of her mother, Emily understandably storms away and Lisa is left aghast. It wouldn’t be long before Bill finds out and Kobe is further in the doghouse with a family already questioning what he brings to the table.

In an effort to reignite their flickering flame, Bilal takes Shaeeda to Atlanta to meet his sister Nefertari and go wedding dress shopping/sightseeing. Though Shaeeda finds comfort and a supportive ear in Nefertari, Bilal does his best to undo any positive developments in the most scenic of settings.

Sitting 20-stories above Atlanta’s Centennial Park on the Skyview Ferris Wheel, “Mr. Romantic” decides to inform Shaeeda that he’s had a lawyer draft up a prenuptial agreement for him. Trapped inside a passenger car 200+ feet in the air and 800 miles from home, Bilal’s baffling decision to share news that he knew Shaeeda wouldn’t like not only ruined the date, but destroyed the entire purpose of the trip.

Fans following Ariela Weinberg and Biniyam Shibre’s relationship are well aware of her ex-husband Leandro. Inviting him into their Ethiopian home for an extended stay on The Other Way, Leandro got the opportunity to reconnect/keep Ari company and also get choked out by her fiancé. With Leandro visiting in New Jersey, Ari takes it upon herself to invite him to their Ethiopian New Years’ dinner.

Ari is far from blind to the jealousy that overtakes Biniyam any time Leandro is around. Inviting her Argentinian ex to an Ethiopian celebration so important to Biniyam was absolutely a power play. While Ari’s family is happy he’s there, Bini feels lost in his own celebration and “gurshas” so much food into Leandro’s mouth that he nearly chokes. If Ari values Leandro’s friendship (and life), it’s probably best to keep him away from Biniyam.

Emily made it known to viewers and her fiancé that the ring he proposed with was strictly a placeholder. With her wedding date approaching and her engagement ring still of the Gashapon variety, she took it upon herself to upgrade her ring and romance her own stone. The problem here is that Kobe promised he would make good on a proper ring and soon did just that.

With excitement in his eyes and a diamond in a champagne glass, Kobe proposed again. Clearly embarrassed, Emily accepts and admits she’d already bought a ring because she feared Kobe couldn’t. Instead of bringing the couple together, Emily’s impatience ruined Kobe’s signature moment and hurt a man desperately in need of a confidence boost.

Thais Ramone’s decision to not tell her father that she was leaving Brazil to get married was always going to be an issue. This is compounded by the fact that she didn’t tell her fiancé Pat Mendes that he didn’t know of her marital plans until a serendipitous conversation slip with Pat’s brother Matthew in Vegas.

While Thais pushes for a shotgun Elvis wedding, Pat shuts down and refuses to move forward with their potential marriage until she comes clean to her father. Even though she did it as a protective measure, Thais’ lie of omission served to force her fiancé to reexamine her intentions and broke her father’s heart.

Biniyam’s exodus from Africa may have come as a surprise for viewers, but no one was more shocked by his departure than his sisters Wish and Mimi. Holding off until the premiere party for his song “Dancey Dancey,” Biniyam opted to wait until the night before his move to tell his sisters he was leaving.

Seeing Biniyam’s departure as the final chess piece in the extraction of her brother, Wish grabbed the closest glass of red wine and flung it into Ari’s face. Watching in stunned silence, Biniyam’s avoidance of telling his sisters he was leaving until the last possible moment deprived them of invaluable time with their brother/nephew and manifested in a way that only Ari felt the repercussions of.

Emily’s father Dan had one rule for the couple living rent-free under his roof: don’t get pregnant again. Though the couple slept in different beds and saw more discord than harmony, they would find time to have a few interludes.

Terrified that they’d just unintentionally created a sibling for Koban, Emily and Kobe bickered over each other’s stance on not using protection. While Emily blamed Kobe’s “medical” concerns over birth control, Kobe blamed her period app and misjudged ovulation period. Equally responsible, they chose to not wear protection and will deal with the consequences for the rest of their lives.