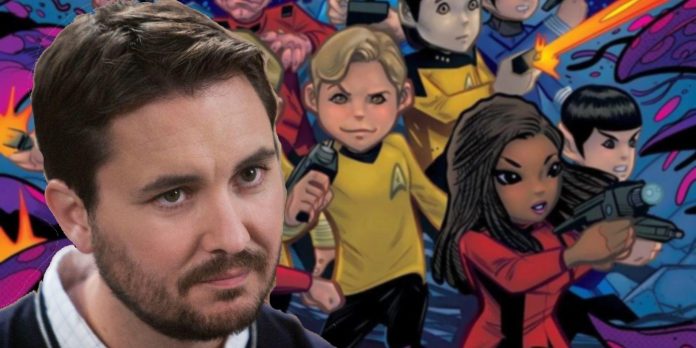 A longtime graduate of the series “The Next Generation”, Wil Wheaton takes on the role of the screenwriter of a major “Star Trek” episode dedicated to its 400th issue, combining the greatest eras of the series. Ever since Gene Roddenberry’s iconic sci-fi series first debuted in 1966, it has become an important product of popular culture. The stories about the Enterprise team and not only became legendary, as they spawned many television series, films, video games and toys that remain relevant to this day. The series is even still gaining momentum thanks to a host of new series, such as Discovery and Picard, which are debuting on the Paramount+ streaming service.

However, some people may be surprised to learn that Star Trek also has a huge history in the comic book world. Since 1967, countless comics based on this series have hit the shelves of comic book stores. These stories have found many owners from distributors such as Gold Key, Malibu and even such big names as Marvel and DC. The storylines over the years will either be direct adaptations of films or TV series, or completely new stories about a film crew boldly going where no one has been before. Recently, however, IDW Publishing has become the latest home for the Star Trek title. The 400th issue is coming out soon, and the company has a special plan to celebrate this event.

As reported by Comicbook.com IDW Publishing will release a new one-off anthology dedicated to the 400th issue of Star Trek. The comic will be a large collection featuring “new stories from across the Star Trek universe.” Wil Wheaton, the actor who played Wesley Crusher in “The Next Generation,” will even get the chance to write an entirely new TNG story for the anthology, which will give him a chance to return to the story that fans know best. When Comicbook.com He says he’s exploring the far corners of the Star Trek universe, they’re not joking. Enjoy this preview of just a few cover options for the anthology, which includes characters from the original series, the next Generation, the Kelvin timeline, and even the lower decks, who will soon get their own series from Squirrel Girl screenwriter, Ryan North.

This new one-off anthology is also filled with writing talent. In addition to the fact that Wil Wheaton will tell a new story “The Next Generation”, the series will also include stories by writers such as Chris Eliopoulos, Declan Shalvi, Rich Handley and Mike Johnson. It will also feature stunning illustrations by Luke Sparrow, Seth Damuz, Megan Levens, Angel Hernandez and Joe Eisma to present the film crews of various generations of “Star Trek” on the page. IDW has even confirmed several stories that will be on its pages. They will include the aforementioned “heartfelt story of Wil Wheaton, TNG himself,” as well as “a visit to the Kelvin universe” and “Kayla Detmer — as shown in Star Trek: Discovery — Adventures in 32nd Century #3— on a new expedition.”

This legendary new anthology will be available in local comic book stores in September. It is expected to cost $7.99, so it will be a great addition to the collection! With countless eras of the series beloved by fans, it will be interesting to see how all of them will be presented in this great love letter to the franchise. Considering that IDW brought in Wil Wheaton to write one of the stories, this massive “Star Trek” comic is sure to appeal to any fan for decades.