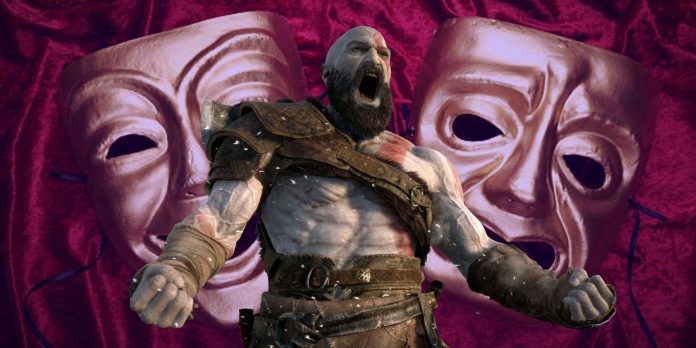 Even though Santa Monica Studio has taken steps to immerse Kratos within the world of Norse mythology, the former Spartan General’s bloody past has continued to haunt him. Generally speaking, the same can be said for the God of War franchise as well. Having been built from the ground-up within the shadow of Ancient Greece, its instantly recognizable pantheon of gods, monsters, and lesson-heavy stories have never been too far away from the forefront of the franchise.

As fans continue to wait patiently for more news regarding God of War: Ragnarok, and its expected debut on PS4 and PS5 in 2022, it’s worth keeping all of this in mind. Despite the new influences that have impacted Kratos’ life and quest for peace in recent years, there’s no escaping the fact that the character and series were both forged with Greek narrative concepts in mind. As a result of this, throughout its nearly two decades-long history, the God of War franchise has held on to its status as a Greek tragedy.

The God of War series’ status as a modern-day example of a Greek tragedy was pretty much solidified for good during its debut installment. Unsurprisingly considering the game’s proximity to Ancient Greece’s mythology and characters, Kratos’ first PS2 adventure featured all the hallmarks that Aristotle attributed to the literary concept during its formative days. So much so that it’s easy to imagine Santa Monica Studio having created the series specifically with the philosopher’s blueprint in mind.

At the forefront of Aristotle’s Greek tragedy road-map was the presence of an initially decent human-being who had attained high status within their local community. Even though Kratos admittedly became prone to bouts of mindless violence in later entries, a case can still be made for the Spartan General having reached both of those footings. What earns a story the right to be called a Greek tragedy above anything else, though, is the ways in which it tackles the idea of human misery.

There’s no denying that Santa Monica Studio’s original God of War excelled in this respect. Like most protagonists that can be found within Greek tragedies, Kratos’ fall from grace was marked by a sudden loss of judgment, and actions that had a profound impact on his wellbeing. Through the misguided act of selling his soul to Ares for short-term benefits, the Spartan General opened himself up to years of torture. The death of his family at his own hands, for example, is the type of self-inflicted pain that’s found throughout countless stories within the genre.

Even though subsequent God of War games would go on to tackle other schools of thought, 2005’s breakout game rounded out Aristotle’s own interpretation of a Greek tragedy rather neatly. Having fought to free himself from his deal with Ares, Kratos eventually became self-aware of how his actions had directly shaped his destiny. The remorse that he clearly felt during the game’s conclusion upon realizing this served as a cautionary lesson for the audience. A key cornerstone, as Aristotle believed, of almost every good Greek tragedy.

Thanks to the groundwork that Santa Monica Studio poured into the first God of War game, each of the series’ follow-on Greek-themed installments also featured narrative elements often associated with Greek tragedies. For starters, having achieved his goal at the end of 2005’s PS2 installment, Kratos quickly realizes that this success would not allow him to bring back his murdered family. Even sitting on a throne in the halls of Mount Olympus, as the incumbent all-powerful god of war, couldn’t reverse the mistakes that had led him to that location.

If that wasn’t tragic enough, extra elements were thrown into the mix to drive home the series’ reliance on its literary inspiration even further. During God of War 2, Kratos eventually discovered that his misery had been partly fueled by his own family. The revelation that Zeus was his father and the implication that Kratos was an illegitimate child are narrative threads that could have been ripped directly from a soap opera – a narrative genre that’s often viewed as the modern-day way of telling Greek tragedies. Throw into the mix the fact that Kratos and Zeus’ war was shaped by a prophetic rumor, and it becomes clear that the tragedy part of the equation runs to the series’ core.

Even though large sections of God of War’s Greek saga were defined by blind violence, each installment can still be viewed as a Greek tragedy. The tragic relationships that underpin each story are a key component of several Greek tragedy-themed theories, even if it can be argued that Kratos doesn’t ultimately learn his lesson during the course of the saga, like Aristotle’s blueprint would have likely wanted. It’s also worth mentioning that several interpretations of the ancient form of storytelling have placed an emphasis on the concept of catharsis, which there is undeniably an abundance of throughout that era of Kratos’ life.

Despite God of War 2018’s pivot towards Norse mythology, Kratos’ story has continued to be defined by narrative elements that are frequently found within Greek tragedies. The simple act of traveling to the Norse world alone to escape his past actions speaks to the self-awareness and misery that the character is still haunted by to this day. Even after hundreds of years of reflection, and several attempts to move-on, the shadow of remorse still looms over Kratos. In some respects, this could be viewed as the realization of the lesson that was absent from the end of God of War 3.

Raising Atreus and attempting to be a better father in the process is in many ways a continuation of the franchise’s Greek tragedy roots as well. How Kratos treats his young progeny is defined largely by his own upbringing, and the mistakes that have led him to Norse mythology. The fact that Atreus pushes back against his father’s wishes throughout God of War 2018 to boot, and seemingly Ragnarok too, is itself a narrative trend that pops up in several Greek tragedies. If the pair end up fighting directly in the upcoming sequel, this will become even more true.

While Kratos has more often not been the maker of his own downfall, at several points within the God of War series other characters have embodied aspects of Greek tragedy story telling as well. For example, Odin’s quest to stop Atreus in a misguided attempt to prevent his own death during Ragnarok could be interpreted as a self-fulling tragedy of his own making. Considering how elements found within Greek tragedies have played a pivotal role in shaping the series since its inception, it stands to reason that more will crop up during future games like God of War: Ragnarok.

The Legend of Zelda: Commemorative Game & Watch Will Be Released...