Home Entertainment The Genshin Impact leak Hints at the release date of Nahida and... 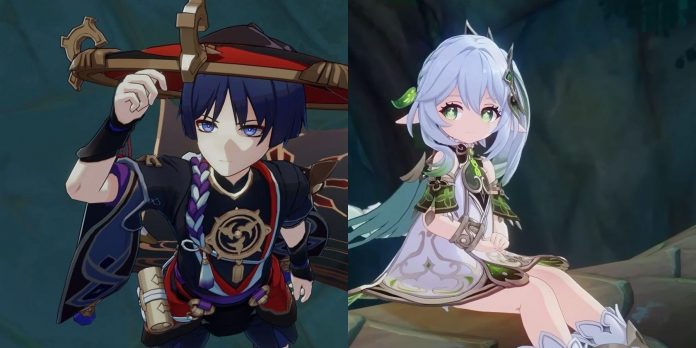 The upcoming Sumeru update from Genshin Impact will add a lot of new characters to the game list. The game’s official social media accounts have already announced three new characters for the 3.0 update.

The recent HoYoverse Twilight Traveler also revealed six new five-star units that should appear in the game in the next updates. One of the most popular Genshin Impact insiders, hxg_diluc, apparently revealed the release dates of the new characters.

The two characters that stand out in the list are Nahida and the Wanderer. Nahida is expected to become the new archon of Genshin Impact, who will protect the new Sumeru region. She is also known as the God of Wisdom, and the history of the game confirms that Nahida is the youngest archon in Teivat. Despite the fact that the HoYoverse developer usually adds new archons to the game list one update after the appearance of a new major region, it seems that players will have to wait for the release of version 3.2 to get this unusual character.

The Wanderer mentioned in the leak is actually the sixth Harbinger Scaramouche who has appeared in the game multiple times, and he will most likely appear with update 3.3. Although the leak mentioned that there is a chance he could appear on the banner in 3.2, this is unlikely as HoYoverse usually avoids hosting two popular characters Genshin Impact in one update. Despite the fact that he was supposed to be one of the villains of the final game, recent leaks hint that he will change his mind and switch to the good side.

Rumor has it that in addition to his name, he will also change his element from Electro to Anemo. Fans claim that this change in Scaramoke’s character could be the reason he wasn’t featured in Fatui Harbinger’s recent video. As for the type of weapon, the Wanderer is expected to use a catalyst that will make him the second male character to use this weapon. There are also rumors that his fighting style is similar to the recently released Shikanoin Heizou.

According to the usual HoYoverse update schedule, players can expect version 3.2 to be released at the end of November, and version 3.3 should be released in early 2023. make some changes to the upcoming Genshin Impact banners.