Home Entertainment The Genshin Impact 2.8 weapon banner has been revealed 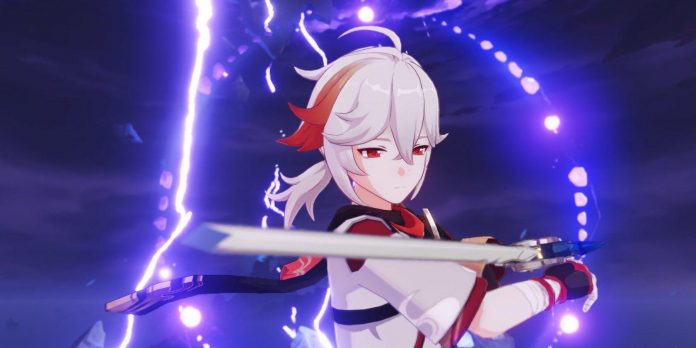 Genshin Impact has a very busy update schedule: each version of the game lasts approximately 6-7 weeks. Each update in the game is divided into two parts, which have their own character and a banner of weapons.
The weapon banner in the game usually contains two limited five-star weapons and five four-star weapons. With the Itto Royal Oni banner coming to an end, it’s time to add a new set of Genshin Impact characters and weapons to the game.
link: Genshin Impact Video Officially Shows Eleven Harbingers of Fatui
The game’s official Twitter account revealed the items that will appear on the first gun banner in the Genshin Impact 2.8 update. Unlike most gun banners, this one will not represent any new weapons. According to the tweet, the new banner cycle will feature the following elements:
Sworn to Freedom (five-star sword) The Lost Prayer to the Sacred Winds (Five-star catalyst) The Alley Flash (four-star sword) Favonius Lance (four-star shaft weapon) Rainslasher (four-star claymore) The Widsith (Four-star Catalyst) Mitternachts Waltz (four-star bow)
The Feedom-Sworn sword is the most recommended sword for Kaedehara Kazuhi, which should appear on the banner of the limited character update. The fact that he gives a lot of elemental mastery makes him an ideal choice for most Anemo characters in Genshin Impact. His passive allows the owner of the weapon to strengthen the entire group, even when he is not on the field, and this effect can be easily activated by Kazuha, which is one of the strongest supports in the game.
Lost Prayer to the Sacred Winds is a five—star catalyst created for DPS catalyst characters like Klee, who is also part of the upcoming double banner. Passive weapons give a significant increase in movement speed, which is extremely important for users of the catalyst, since they need to constantly change their position during combat. The secondary characteristic of the weapon is the Crit Rate, which makes it an ideal choice for most catalyst characters who need high damage rates.
Despite the fact that the banner offers two decent five-star weapons, players are most excited about the Mitternachts Waltz four-star bow, as it is the best choice for one of the most popular support characters in the game, Fischl. The weapon has one of the strongest four-star passive effects in Genshin Impact, which increases two important characteristics: attack and damage from elemental skills. Players expect Fishle to appear on the banner of the second character of the update, as the live broadcast has already confirmed that they will also receive a brand new skin.
Genshin Impact is now available on mobile devices, PC, PS4 and PS5. The Switch version is under development, the release date has not been confirmed.