Home Entertainment The Game Awards Can Be Seen Live From Its First Experience Of... 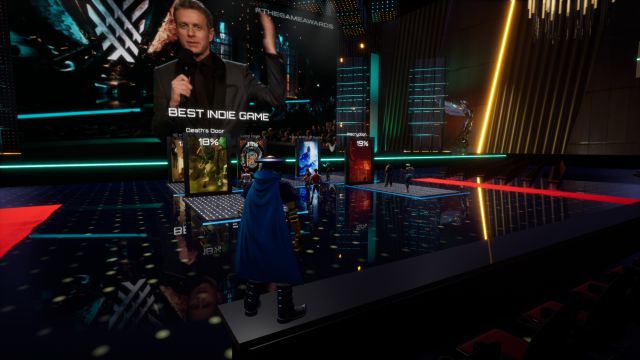 The Game Awards: Through Geoff Keighley’s Axial Tilt experience, fans will be able to watch The Game Awards gala, participate in voting, win prizes and play games. The Game Awards has made official the premiere of its first official experience in the Core metaverse, the platform dedicated to the creation of experiences, games and events created by the users themselves. With the aim of allowing the TGA 2021 gala to be seen live in a virtual space while interacting with other players, fans will be able to see everything that the broadcast gives in the early hours of this Friday, December 10, starting at 02:00 CET.

The name of Core’s budding app is Axial Tilt, an interactive world as a metaverse hub for shows and events hosted by Geoff Keighley. Axial Tilt is defined as “a new way to experience The Game Awards“, since it allows the audience not only to see the show live, but in this case it will also be possible to participate in prizes, socialize with other friends through parties virtual before and after the gala; or even play games.

The Game Awards Promises Unique Activities Exclusively for Axial Tilt on Core; Among them, a red carpet that will begin at 01:00 AM (CET) this Friday, December 10; an hour before the gala begins. There will also be an afterparty right after the awards show is over with a special guest DJ.

“I’m always on the lookout for new and exciting experiences to attract new audiences to The Game Awards,” said Geoff Keighley, creator, executive producer and host of The Game Awards, on the occasion of this announcement. “The birth of new metaverse platforms such as Core, and the expansion of virtual experiences that we are experiencing around live events, presents an incredible opportunity to give fans innovative new ways of interacting with the show, and considering that it is a show about interactive entertainment, it fits the bill. ”

The Game Awards 2021 can be followed live from 02:00 (CET) this Friday, December 10; that is, on the night from Thursday to Friday. We will have dozens of announcements and at least ten world firsts; including one that has been in the works for two and a half years. We will also know, of course, the GOTY, the Game of the Year.