Home Entertainment The Future of Batman Beyond Shows What Kind of God Catwoman Will... 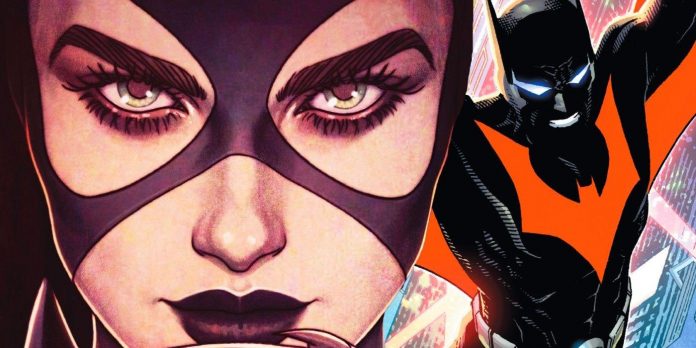 Warning: Contains spoilers for Batman Beyond: Neo Year #4!
One of the most enjoyable parts of reading comics about the future, such as Batman of the Future, is exploring the legacy of favorite characters, and the legacy of Catwoman will surely delight her fans. Batman Beyond is the story of Terry McGinnis, a teenager who assumes the mantle of Batman after Bruce Wayne has become too old for the role. The show and the comics that emerged from it extensively covered the fates of various villains, such as Mr. Freeze and the Joker, but until that moment they did not show the influence of Selina Kyle on the future.
Catwoman, aka Selina Kyle, has grown a lot during her existence. Originally starting out as a pure villain, she has become one of Gotham’s most important antiheroes. She has a great weakness for vagrants who are rejected by society, whether cats or humans, and in many of her stories Selina tries to protect those who cannot rely on ordinary authority figures. While there were non-canonical stories, such as the recent Batman/Catwoman series by Tom King and Clay Mann, that imagined what Selina would do in the future, the world of Batman Beyond touched the character quite a bit, despite the fact that it includes a futuristic version of Catwoman. However, this version of Catwoman is not directly related to Selina, she just uses her name. But Batman Beyond: Neo Year finally shows fans that Selina’s true legacy goes beyond her imitation.
Related: DC’s Future Catwoman Has One Power That the Original Will Kill For
In Batman Beyond: Neo Year #4 by Jackson Lanzing, Collin Kelly and Max Dunbar, the Sanctuary of Catwoman is briefly shown when Batman crashes into a building during a Gotham Sword fight. One of the parishioners of the half-human half-cat in the temple shouts: “Holy Selina!” when the conflicting couple passes, showing that the Catwoman has reached a godlike status among these people. And given the clearly mutated status of these devotees, Selina will probably appreciate this aspect of her heritage.
In Neo Gotham, there is a group of people who splice their DNA with the DNA of various animals, called Splicers. While minor splicing has been fashionable for a while, society as a whole largely looks down on this practice. Although the splicers only appeared in one episode of the original show, Batman Beyond: Neo Year has previously made deep references to the show to expand its world and deepen its history. A group of self-proclaimed “Cat Boys” are probably social outcasts, banded together to honor the iconic defender of the outcasts from the past. This is the perfect legacy for Selina and shows that while she may be absent from the world of Batman Beyond, she will continue to inspire the outcasts to unite.
Of course, in addition to making a meaningful statement about Selina’s legacy, there is also the humorous aspect of futuristic feline people worshipping someone named Catwoman. But this does not detract from the strength of her legacy. This actually fits Selina’s playful nature very well (as also evidenced by her recent hilarious wedding to Batman). By elevating Catwoman to godlike status among Neo Gotham’s outcasts, “Batman Beyond” pays homage to her character, giving Selina a legacy she could be proud of.

Every 1st generation Pokemon that later received a regional variant