Home Entertainment The funniest debate in the conference room of the 4th season of... 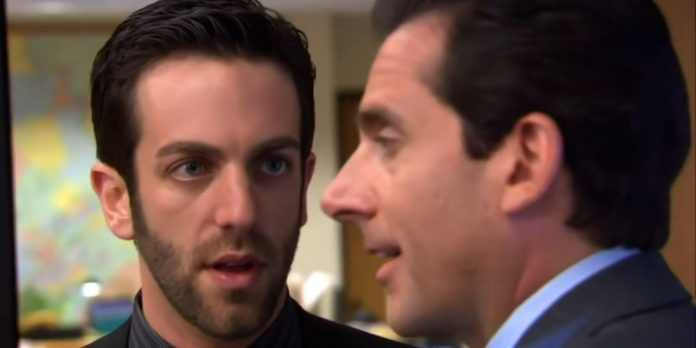 The hilarious debate in the conference room of season 4 of “The Office” was almost cut out of the episode. Originally created by British comedians Ricky Gervais and Stefan Merchant, the American version of the show debuted in 2005 and lasted nine seasons, after which it was soon recognized as one of the best sitcoms of its time. “The Office” received 42 Emmy Award nominations, five of which won. One of these nominations was for the 7th and 8th episodes of the 4th season of “Money” based on the script by Paul Lieberstein.

Since Jan (Melora Hardin) lives with Michael Scott (Steve Carell), her need to change Michael’s lifestyle forced regional manager Dunder Mifflin to get a second job as a telemarketer. After a late night, Michael was supposed to give a presentation on Microsoft PowerPoint, but he failed. In a subsequent argument about the importance of PowerPoint, Ryan Howard (B. J. Novak) uses the word “anyone,” to which Michael scoffs and says, “Whoever is actually right.” This leads to a hilarious debate among the staff about how to use the word correctly, with Creed (Creed Bratton) calling it “a made-up word used to deceive students.” Kevin Malone (Brian Baumgartner) agrees, stating that he knows what’s right, but calls everyone “jerks” for not coming to his band’s performance. It was only after an explanation from Pam (Jenna Fischer) and Toby (Lieberstein) that it was established that Ryan was right in his use of the word “anyone”.

Related: Office: Michael Scott Was Right, He Was a Great Boss

In an episode of The Office Ladies podcast (via Mashable), Fisher and Angela Kinsey revealed that the funny scene in the conference room was almost completely cut from the episode. Fischer explained that there were quite a few objections in the scriptwriter’s room to the removal of the scene, but Lieberstein fought to keep it in the episode. Read below what Fisher and Kinsey said.

Kinsey: He fought for it. He loved it. And I love every bit of that scene in the conference room.

Fischer: He told me that the writers’ room voted to cut him. There was a lot of pressure on him to cut the runner. And he really felt that he should stay. And he’s very happy that he did it, because that’s the clip they showed at the SAG Awards when we were nominated that year. It was a “who-who-who” scene.

The inclusion of grammar debates at the SAG Awards only confirms the quality of the writing of the scene. Since the argument ensures minimal plot development of the episode, Fischer explained that this scene was chosen for deletion. However, they are both happy that the scene remained, as critics and fans consider it the highlight of the episode.

Although the “who-who-who” discussion may not move the story forward much, the running joke allows the entire main cast of characters to play against each other. This moment also further reinforces some minor storylines, such as Kelly Kapoor (Mindy Kaling) insulting Ryan about their breakup with her comment that she was used as an object, or Kevin’s anger that no one saw his band playing. However, the important purpose of the scene is to delay Ryan’s ultimatum about hiring, which was later put forward to Michael, which causes expectations to rise, creating tension at the expense of a humorous tangent. Although the general meaning of a good script is “to kill your loved ones”, this scene is something that would not benefit anyone on the floor of the editing room of the “Office”.