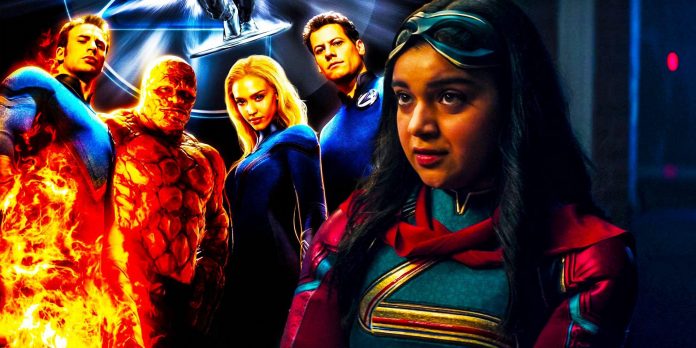 Ms. Marvel’s post-credits scene quietly set the stage for two huge Fantastic Four villains to join the MCU. Captain Marvel’s shocking cameo in Ms. Marvel episode 6 has massive implications for the MCU’s future that extend beyond Phase 4. What happened to Kamala and Carol suggests that Marvel is on the cusp of introducing a major corner of the Marvel Universe into the MCU.

The events of the Ms. Marvel finale may be relevant to multiple MCU projects. The most obvious ones are naturally The Marvels and X-Men. Since it was an unexpected stepping stone toward the MCU’s first X-Men team, Bruno Carrelli’s mutants tease is understandably getting the brunt of the attention right now. In dropping this reveal, Marvel has made Iman Vellani’s Kamala Khan its first mutant hero while also laying the groundwork for how the X-gene works in the MCU. Ms. Marvel also set up Kamala’s highly anticipated team-up with Carol Danvers and Monica Rambeau. Captain Marvel suddenly taking Kamala’s place is undoubtedly a hint at why these characters will be teaming up in The Marvels.

Related: MCU Created A Loophole That Can Make The Scarlet Witch A Mutant

Within the same scene, the episode created a Fantastic Four link that might have a direct correlation with its plans for Marvel’s First Family in Phase 4. Kamala and Carol’s predicament seeming involves the Negative Zone, which has strong ties to the team in the comic books. In fact, Ms. Marvel’s post-credits scene has made it possible for the movies to introduce two of the biggest characters in the Fantastic Four’s rogues’ gallery. Here’s who they are, how can they can be introduced, and what their MCU roles could be.

Kamala’s bracelet somehow caused her to vanish with Carol appearing in her place in the next instant. What transpired in this scene is identical to a dilemma shared by Rick Jones and Captain Marvel, who was trapped in an anti-matter dimension called the Negative Zone. Acquiring matching pairs of the Nega-Bands forced both characters to be bound to the same physical space, which meant that only one could exist in the world at one time. The other was relegated to the Negative Zone. So, if Rick found himself in trouble on Earth, he could bang the Nega-Bands together and have Mar-Vell take his place. An unfortunate consequence of this, of course, is that Rick had to linger in the Negative Zone until they traded places again. Looking at what happened in Ms. Marvel’s post-credits scene, The Marvels is poised to give Kamala and Carol the same problem by introducing the Negative Zone and confirming that Kamela’s bracelet is one of the Nega-Bands.

The Negative Zone is the home of two Marvel Comics villains, Blastaar and Annihilus. For years, the two alien warlords have been engaged in a war over which one will rule the Negative Zone. Their greatest enemies may always be each other, but their goals have often put them at odds with the heroes of the Marvel Universe as well. Introduced in the pages of Fantastic Four in the late 1960s, both Annihilus and Blastaar have made multiple attempts to escape the Negative Zone, but their efforts were repeatedly foiled by Mr. Fantastic, Invisible Woman, Human Torch, and the Thing.

Each of the two cosmic powerhouses has been proven to be an incredibly powerful threat, even without the armies they command. Usually, it takes the entire team to beat them. Of the pair, Annihilus has then far posed the greatest challenge to the Marvel Universe. His efforts to bring destruction across the universe forced an assembly of heroes to team up with villains like Thanos in Marvel’s Annihilation event. As for Blastaar, he too is a force to be reckoned with, as he’s gone up against the Eternals, the Avengers, and the Guardians of the Galaxy.

Why The Fantastic Four Could Fight Blastaar In The MCU

With Marvel gearing up to do a Negative Zone story in the MCU, there’s a strong possibility that the two would-be rulers of this dimension have live-action counterparts. Regardless of whether or not they’re shown or referenced in The Marvels, either could have roles to play in future movies and shows. Blastaar, for his part, is a strong candidate for the Fantastic Four’s first main villain. If Marvel doesn’t want to rush into Doctor Doom or Galactus, it could easily start with Blastaar instead. If so, Fantastic Four could offer its own interpretation of the story where Mr. Fantastic discovers the Negative Zone. And considering what Ms. Marvel’s post-credits scene implies about the future, the prospects of Fantastic Four diving into the Negative Zone aren’t bad at all. With his power level, Blastaar would be a formidable adversary for the four heroes to overcome if they step foot into his domain.

Annihilus Could Be A Phase 5 Crossover Villain

Similar to Blastaar, Annihilus is one of several options Marvel may consider for Fantastic Four’s villain, but his potential in the MCU is actually so much greater than that. His comic history makes him an ideal choice for Thanos’ MCU replacement. Not unlike how Thanos was the overarching villain of the Infinity Saga, Annihilus can cast a shadow on Phase 4 before emerging as “the final boss” of Phase 5. While it may be that the real plan is for Annihilus to be a one-and-done story where he fights Carol, Kamala, and Monica in The Marvels, another possibility is that Marvel will use their adventure to set up a much bigger role for his character.

The large-scale battles that raged across the universe in Annihilation show that Annihilus is a crossover-worthy villain, and perhaps not a character who should be limited to just The Marvels or Fantastic Four. He could be in either movie (or both), but Marvel’s best possible use of his character would call for Annihilus’ biggest story – Annihilation – to be saved for later. Marvel can’t do an event as big as Annihilation justice with just The Marvels or Fantastic Four. It can, though, follow up Ms. Marvel’s Negative Zone tease by officially introducing the character and having him escape the Negative Zone in an upcoming film. If that happens, an MCU version of Annihilation can play out in Phase 5 with the Fantastic Four, Captain Marvel, and possibly both Nova and Adam Warlock rising up to stop him. Even Blastaar might be on hand for the fight.