Home Home Page The football match was held in zero gravity: at the highest altitude! 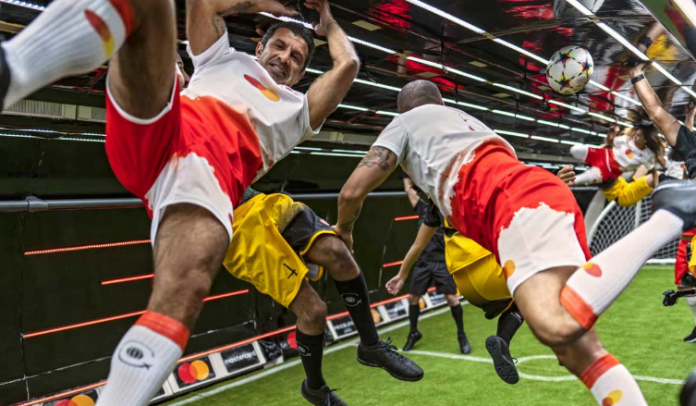 A special football match was held at an altitude of 7 kilometers from the ground. Gravity was also dropped in the match, which was also attended by football legend Luis Figo. The football match managed to get into the Guinness Book of Records.

Luis Figo, who left a mark in the history of football with his successful career, this time took the field for the Guinness Book of Records. The world record they were trying to break was a match at the highest altitude, and yes, this record was broken. Moreover, there was more. The plane used for the football match, on the stage of which Luis Figo appeared, flew on a parabola. In other words, he zeroed out the gravitational force.

A 75-square-meter room was built inside the aircraft flying for the Guinness Book of Records. This area covered the field where the football match was to take place. 8 football players, including Luis Figo, started a fight after running away together with the referee and cameramen. In the match, which took place at an altitude of 20,230 feet (approximately 6,775 meters), the plane, which began to fly along the parabola, could not stop the Fig. Fig managed to score a goal in the absence of gravity.

Here is a shot from a football match held in zero gravity.

Football, which was not easy for many people on earth, became much more difficult when gravity became zero. Both the players and the referee found it difficult to maintain control when gravity decreased. When you watch the match recorded by Anbean, you will understand much better what we mean.

So how is it that the gravitational force is reset before it goes into space?

There is nothing new about dropping gravity in airplanes. Since the early 2000s, the European Space Agency has even organized tours for students who want to experience weightlessness. The same was done for adults in the USA. So how is it that the gravitational force inside an airplane can be dropped without leaving Earth orbit?

In fact, we can say that physics and mathematics are talking now. An airplane that rises above 20,000 feet, moving at a speed of more than 800 kilometers per hour, with a sudden maneuver directs its nose into the air, where there is a large angle of 40 degrees. The nose of the plane, which rises for a while, then suddenly descends to the ground. At this moment, gravity is almost zero. This type of flight is called parabolic flight because the route drawn by the aircraft is also similar to an ellipse.