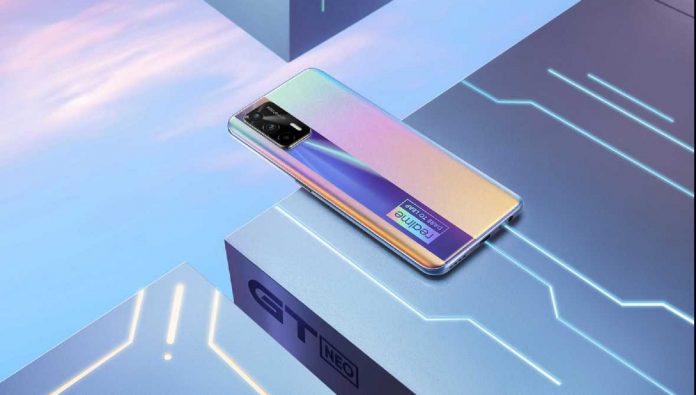 The Realme GT Neo will appear in China on March 31st. It was previously confirmed that MediaTek’s Dimensity 1200 processor will be at the heart of the smartphone. Realme has now shared new images showing the design of its smartphone.

Here it is possible to see the rear camera system of the smartphone. It is also among the confirmed information that the 64-megapixel sensor will take over the main camera function in the triple system.

The camera island is placed above the bright strip on the rear panel. At the bottom of this glossy panel, there is the Realme logo and the slogan “Dare to Leap”. Realme calls this “Box Logo Design.” The company stated that the new logo was inspired by the Cyberpunk culture and was a kind of homage.

The color option that Realme shares its images is called “Final Fantasy”. It was stated that the micron-level matte back panel is resistant to impacts and does not show dirt.

On the right side of the Realme GT Neo is the power button of the phone. The volume control keys are placed on the left side. On the lower edge of the phone, the USB-C jack, speaker, microphone and 3.5 mm. It has a headphone jack. The absence of a fingerprint scanner on the sides or back panel confirms that the phone will have an AMOLED display panel.

It was previously announced that the GT Neo will have a 4D Vibration and 3D tempered liquid cooling system. This system, consisting of stainless steel and copper, provides the opportunity to lower the temperature of the phone by 15 degrees.

It takes six more days to meet the Realme GT Neo. It will not be a surprise to encounter new details about the phone in this process.

Lenovo ThinkBook Plus Gen 2 comes with an E Ink display