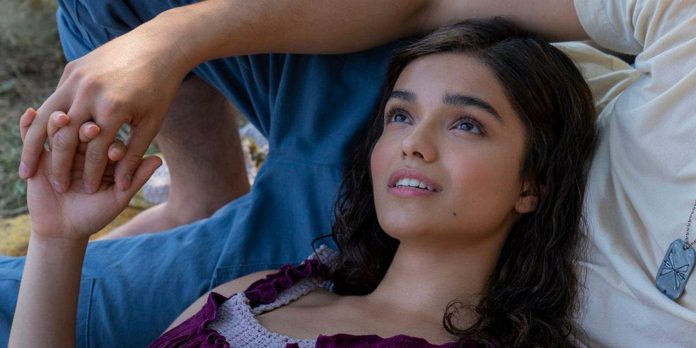 “The Hunger Games: The Ballad of Songbirds and Snakes” Lionsgate has unveiled its first official image featuring the main stars Tom Blyth and Rachel Zegler.

“Happy Hunger Games! And may luck always be on your side!” sounds like the greeting with which “The Hunger Games” begins, but in the new Lionsgate prequel “The Hunger Games: The Ballad of Songbirds and Snakes”, whose title is complete, the focus is on young love, and not so much teenage blood sports as in the original novels. in the popular series by Suzanne Collins.

Lionsgate has just released the first image from the upcoming Hunger Games movie, which depicts Zegler and Blyth as the lovers present in the book, Lucy Gray Baird and Coriolanus Snow. The image has a completely different shade than the image of Katniss Everdeen looking resolutely into the camera, trying to figure out how best to stay alive in the vicious world of books. The first image released by Lionsgate, in which Lucy Grey Baird, played by Zegler, leans on Blyth’s leg in the image of Coriolanus Snow, is a romantic and pastoral image, as far away from the world of Collins’ brutal teenage battle royale as it is possible at all. they say it will be like this for a long time. Zegler, who came from “West Side Story”, is familiar with the world of youthful love, on the one hand, and violent teenage conflicts, on the other.

The Hunger Games prequel was launched by Lionsgate almost immediately after Collins announced that she was revisiting the world of her series. Of course, her idea of a prequel dedicated to the young Coriolanus Snow, who will grow up and become the vicious President Snow, who was so aptly played by Donald Sutherland, definitely made more than one fan scratch his head. The series, however, was a powerful blockbuster, and casting announcements cascaded from Blyth as the younger Snow to Zegler, a favorite of Game of Thrones fans Peter Dinklage, to the recent announcement of Viola Davis as a villain.

Francis Lawrence returns to direct the pair in what looks like a re-adaptation of the material, paying as much attention to Zegler’s newcomer to the franchise, Lucy Gray Baird, as to Blyth’s future villain, Coriolanus Snow. Judging by the first image, it will present a world of tragedy, since viewers already know what awaits some of these characters, and the title “The Ballad of Songbirds and Snakes” does not seem too encouraging. . Focus around the tenth game in the series, with young love at stake, may the odds always be in their favor.

“The Hunger Games: The Ballad of Songbirds and Snakes” will be released on November 17, 2023.

Dying Light 2 Will Feature RTX and DLSS, Highlighted In New...