Home Entertainment The first murder: 10 times when Cal and Jules were a pair... 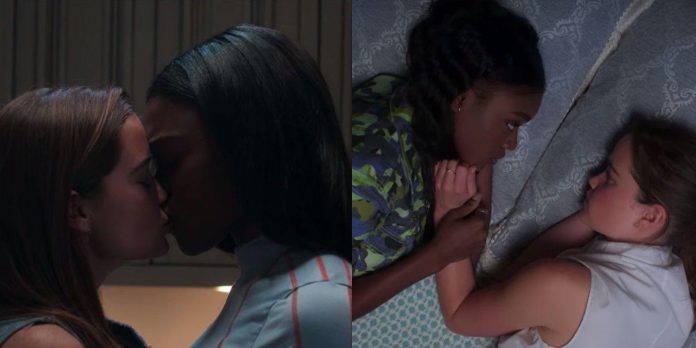 Though Stranger Things remains at the top of Netflix’s must-watch list, First Kill is working its way up, as the lead characters’ names trend repeatedly on Twitter. Paranormal romance has tended to be a predominantly-heterosexual genre, so fans getting a sapphic vampire romance during Pride Month are loving the new show.

There’s no question that Juliette and Calliope are a cute couple, risking everything to be with each other. But more than that, they are actively fighting their biases, instincts, and families for each other’s sake. Their relationship goes beyond simple infatuation; it portrays nothing less than the all-consuming power of first love. Throughout First Kill, Cal and Jules prove that they are a couple to look up to.

Cal Sees Juliette, Not A Monster

Calliope claimed to sense Juliette’s nature from the get-go and got confirmation through the blood pills and her silver bracelet burning Jules’s hand… but she wouldn’t have staked her if Juliette had been able to control her thirst. Even after staking her, they danced around each other without Cal trying again.

RELATED: 10 Things First Kill Does Better Than The Vampire Diaries

Despite every bit of training telling her otherwise, Cal saw the humanity in Jules. She, like Ben, began to push back on the idea of all monsters being violent because that was not how she saw Juliette. Even after watching Juliette kill, she refused to see her as a monster. It’s a powerful example of accepting a loved one’s darkness, and absolutely something more couples should strive towards.

They Couldn’t Take Their Eyes Off Each Other

Before Calliope and Juliette knew each other’s backgrounds, they were intrigued by each other. Jules had a massive crush on Cal, with Ben teasing her mercilessly over her fear to approach her. And while Calliope picked up on Juliette’s true nature quickly, she took the time to kiss her before driving a stake through her heart.

Love at first sight may be a cheesy romance trope, but it truly seems to be what Cal and Jules found in each other. Juliette took a chance on Cal, with all of the butterflies that entails, and Calliope began changing her entire perspective on life just by seeing Jules carefully catch and release a bee.

Juliette bit Calliope in the first episode. After that terrible mistake, however, she managed to keep herself in control, no matter how much her instincts told her to drain Calliope dry. She resisted her blood lust when Calliope was injured by the zombie, and even when Elinor literally put Cal’s blood in her mouth.

Every pop culture vampire trope shows a moment when the blood lust overpowers the vampire’s love, but this trope is actually flipped on its head in First Kill. The more she knows Cal, the better Jules can resist her blood lust. Whether life and death are on the line or simple emotions, Juliette puts Calliope’s well-being above her own instincts, a degree of self-control and sacrifice that few people can claim to have.

They Fight For Each Other

RELATED: The 10 Most Popular Netflix Original (English) TV Shows, According To Their Data

Their devotion only grew from there, fighting physically and verbally to keep each other safe. They worked together to take down the zombie, and while both were trying to protect the school, they were particularly focused on protecting each other. The best couples are willing to fight for their relationship and fight for each other’s protection.

For the first few episodes of the show, the audience is inundated with monologues and fights about how Juliette doesn’t want to kill anyone. She finds it morally wrong and is revolted by those around her doing it. The show makes it extremely clear that Juliette hates being a vampire, and will resist killing as long as she can.

Until Calliope is in danger, that is. It doesn’t take much pushing for Juliette to kill Cook, and she doesn’t feel regret for it after the fact. Most supernatural couples in movies and TV have a moment where the human sees the ‘creature’ for what they are and runs away; not so here. That’s because Juliette was doing what she had to do, and the fact that even Cal’s parents approved shows how admirable her decision was.

Despite their tensions, Juliette deeply loves her family. But those relationships come second when they are set against her relationship with Cal. She rejects Elinor’s attempts to get her to feed on Cal, refuses to keep her distance, runs away from her father, and even betrays Elinor to Oliver, all for Calliope.

Juliette will defy every order they give her if it’s intended to end their relationship. While ideally, nobody would ever have to choose between their family and love interest, disapproving in-laws are a fact of life. Juliette’s response to her family shows how important it is to defend the one you love, even against your own family.

They Ran Away Together

When Juliette’s home was under attack, and when her father was out of sorts, it made sense for her and Calliope to run away. But then they each got in touch with their respective families and demanded that they be given the day to be together. Despite there not being any imminent danger, they wanted nothing more than to be together.

Both girls wanted to have the chance to live a normal life, and that meant they wanted to paint sets for the school play and spend time together. Unlike many teen vampire couples on TV, it was a choice they made out of desire, not necessity. They just wanted to be together and were willing to up-end their whole lives for that purpose, if necessary.

They Physically Stood Between Each Other And Their Family

It was one thing for Juliette to get between Cal and Cook and for Calliope to get between Jules and Ashley, but it’s entirely different to do it where family is involved. One of the most powerful proofs of maternal love in the series was when Talia told Jack that he would kill Theo over her dead body, and both girls demonstrated that same love for each other.

Juliette’s entire family wanted to kill Calliope, but Jules stood between them, daring her family to get through her first. Likewise, when Calliope brought Jules home to seek help, she stood between her parents and Juliette, despite her parents being armed. They put their own lives in danger protecting each other from their respective families, an extreme length that proved their dedication beyond all doubts.

Juliette and Elinor fundamentally disagreed about the nature of their species and their role in the world. Elinor saw humans as food and playthings, nothing more, while Juliette saw them as equals worthy of respect and compassion. But while this caused bickering between them, it took Calliope to bring it to a breaking point.

Juliette did not betray Elinor after she killed a man and disposed of his body joyfully, but she did when Elinor killed Theo because she could not bear the suffering Calliope was going through. Hurting Cal was unforgivable, greater than any harm Elinor could cause Jules herself.

Juliette Tried To Save Theo

Theo’s death was crushing to watch, from the confused horror of Apollo to the overwhelming grief Calliope felt. And while watching Theo return as a vampire led to even more hardship, it’s easy for fans to see what Juliette was trying to do. Theo asked her for help and she did everything she could to do so.

Juliette wanted to give Theo a painless, noble death. She wanted to fix a situation that couldn’t be made better. While the decision turned out to be a mistake, and one that turned Cal away from her, she tried. Hopefully, in season 2 Calliope will come to understand that trying is all a person can do.

Venom Will Be The Key To The Connection Between Sony and...