Home Entertainment The first look at the Halo Infinity joint campaign is shown in... 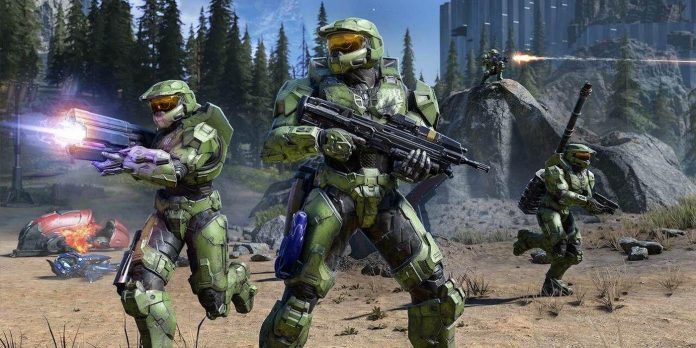 Developer 343 Industries has released a new video showing the long-awaited cooperative mode of the Halo Infinite campaign. The last part of the cult saga of sci-fi shooters was launched back in 2021, but it did not have several modes that became the main elements of the series. Beta testing of the Halo Infinite joint campaign is currently underway until July 22, and now the creators of the game have presented fans with a completely new detailed look at the cooperative mode.

The collaborative campaign has been a recurring feature of the Halo series since its first installment, making its absence from Halo Infinite very noticeable. The multiplayer mode allows a group of players to go through the Halo single-player campaign together, whether online or playing on a split screen, creating a completely new space combat experience. However, Halo Infinite was not released with a co-op campaign, and instead 343 Industries decided to add the mode to the game as an update after launch. Since this announcement, 343 Industries has postponed the Halo Infinite co-op several times, and now this mode is due to be released in August.

Halo has posted on YouTube the first look at the cooperative mode of the Halo Infinite campaign. In an hour-long walkthrough, lead campaign designer John Mulkey, community leader Brian Jarrard, lead campaign engineer Isaac Bender and program manager Ron Brown team up to fight together in Zeta Halo. Halo Infinite Co-op creates a customizable state of the world based on each player’s single-player game file, allowing the transfer of progress between single-player and multiplayer. A joint battle group starts with the earliest mission that everyone in the squad has not completed, while everything that was lost by each player remains completed. The intense gameplay of the Halo Infinite joint campaign can be viewed below:

Apart from the co-op campaign, the Halo Infinite Forge mode is probably the most anticipated feature of the sci-fi shooter. Like the co-op game, the Forge map editor is a staple of the series, which was unfortunately excluded from Halo Infinite at launch. This mode allows players to edit the map to create their own battlefields or even completely original game modes. According to a series of leaks, the Halo Infinite Forge will be incredibly reliable thanks to mechanics such as a combination of weapons and interchangeable weather effects for maps. Forge is expected to appear in the third season of Halo Infinite, although the exact release date is not reported.

Judging by the game video from 343 Industries, the joint gameplay of the campaign is effectively implemented in Halo Infinite. The mode will support the personal progress of each player in the game, and features such as friendly fire and enemy scaling will make the joint game completely original. The co-op campaign is due in August, so fans should start assembling their own Spartan squad before the next big update of Halo Infinite.