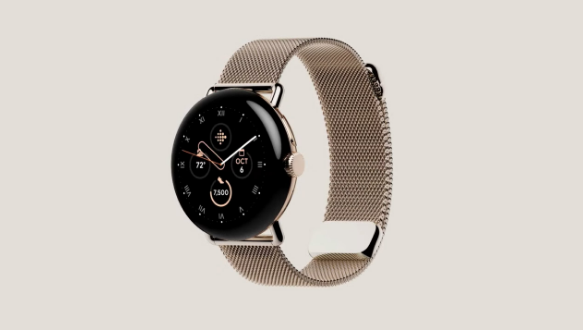 Google has unveiled its first Pixel Watch smartwatch. Smart watches with a remarkable design seem to be able to impress consumers with their technical characteristics.
The American technology giant Google has long officially held the expected event. At this event, we had the opportunity to get acquainted with the company’s new products. One of these products was a smart watch called Pixel Watch. Thus, Google has officially entered the smartwatch industry. So, what does this smartwatch offer the consumer?

When we look at the design of the Google Pixel Watch, we are faced with a round and frameless screen. There are two buttons on the side panel, one of which is designed for rotation. In addition, the watch’s microphone is also located on the same front panel. We will not do without mentioning that the screen of the smart watch has a size of 1.2 inches and is made using AMOLED technology.

Google smartwatches work with the Wear OS operating system and bring consumers all the benefits of this operating system. So much so that when using this smartwatch, you can use all of Google’s services, such as Maps, Assistant, or Wallet. In addition, applications on the phone can also be controlled through this smart watch. According to Google, smart home products can also be controlled using a smartwatch.

Google Pixel Watch, like many smartwatches, offers advanced features for fitness and health. Actively working with its Fitbit sub-brand for smartwatches, Google allows you to track almost any sports activity, from swimming to running. Smartwatch sensors measure heart rate and provide an ECG service.

Google smart watches with water resistance up to 50 meters are equipped with a 300 mAh battery. This battery provides approximately one day of use. Smart watches, models of which have built-in GPS or LTE support, also offer the user a variety of strap designs. Thus, Google Pixel Watch will be compatible with both classic and sports combinations.

The possibility of smartwatches that will officially go on sale in some European countries and the United States will appear in Turkey, at least not from Google.The Pixel Watch version with GPS and Bluetooth will sell for $349 in the US, while the LTE-enabled version will sell for $399.

Google Will Change The GBoard In Split Screen For Folding Mobiles

Oppo has the development department at OnePlus