Home Entertainment The extended version of Unleashed made one fight scene with Jet Li... 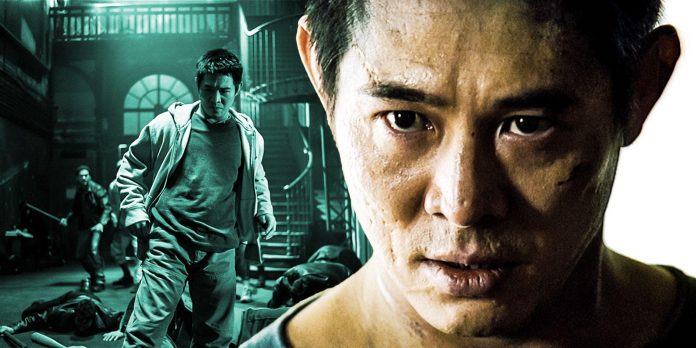 The extended version of Jet Li’s 2005 film Unleashed had several longer fight scenes, one of which added a lot to the film. Shot by Louis Leterrier, the film Unleashed tells about the legendary martial artist Jet Li in the role of Danny, a man who has been held captive by a Glasgow loan shark Bart (Bob Hoskins) since childhood. Bart trained Danny to attack his enemies like a vicious animal as soon as the collar was removed from his neck, and Bart compared Danny to his personal attack dog.

The extended version of Unleashed on DVD reintegrates longer versions of three battle scenes from the movie to play them as part of the movie. The first one takes place during one extortion in a jewelry store and highlights Danny’s wild character more. In the extended version, one of the guards electrocuted Danny from behind, and he passed out for a moment. When the other two guards drag him away, it only takes Danny a few seconds to recover, grabbing the two guards by the groin and throwing them aside. Thanks to Danny’s martial arts skills, which Jet Li flaunts, combined with his training in aggressive attacks, he easily defeats his opponents and even directs a taser at the guard who used it against him as payback.

RELATED: Jet Li and Jason Statham’s Collaboration Is Rated from Worst to Best

The “Unleashed” battle scenes, under the direction of legendary combat choreographer Yuen Wuping, changed Jet Li’s usually smooth and graceful wushu to portray a child-like Danny with the canine aggression that Bart instilled in him. Once his collar is removed, Danny becomes completely unstoppable in a fight. The longer version of the jewelry store brawl puts much more emphasis on what Bart has turned Danny into and how much it takes to put him out of action for at least a short time. Unleashed is a very real contrast between the angry beast Danny is raised by Bart and the humanity he gains when he is taken away by Sam (Morgan Freeman) and his stepdaughter Victoria (Kerry Condon). Unleashed’s early fighting scenes, besides being awesome martial arts in a vacuum, serve to confirm this point. In the expanded version of Unleashed, a longer representation of the battle in the jewelry store makes it more acute.

In the episode, the colors are not completely corrected and there are no finished sound effects, as in the other two extended battle scenes. However, even with that caveat, this longer version of the jewelry store battle improves Unleashed as a whole thanks to what it adds to Danny’s story. Despite the fact that the theatrical version of Unleashed is relatively short, the battle in the jewelry store shown in the extended version makes it much better than the martial arts scene with the sophistication and brute force of Tony Jaa’s films about Ong Bak. It also brings another layer of depth to Danny’s arch in the film.

Although the shortened versions of the three battle scenes did not harm the film, their full incarnation in the extended version of the film, even without full post-production, was a real gift for Jet Li fans. Of the three of them, the jewelry store fight benefited the most from the expanded version of Unleashed, as it was shown in full form, which cemented its role in Danny’s story about escaping from captivity to a new life. Being part of the expanded version of Unleashed, the longer jewelry store also just adds more materials to strengthen the film’s reputation as Jet Li’s best English-language film.

New Amsterdam Season 4: Who is Max’s new adversary joining the...