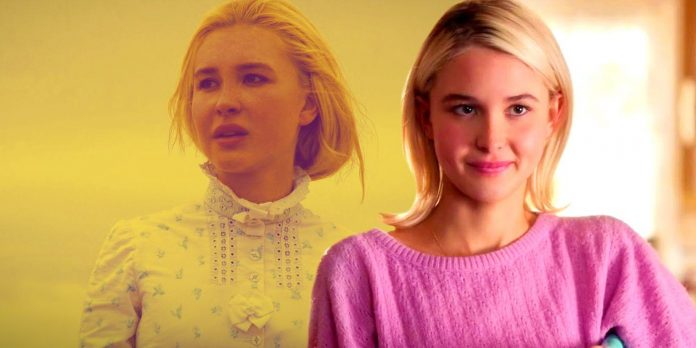 Despite the fact that the star of 1883 is only 21 years old, the career of the young actress Sheldon Isabel May since 2018 covers both large and small screens. Since her professional career began only at the age of 16, Isabel May did not go the standard way from a child. an actor into an adult star. Despite this, the heroine of 1883 has already scored an impressive number of screen credits in her short career. As the 1883 Elsa (and the show’s narrator), May made a big impression thanks to her dramatic acting abilities.

However, the “Big Bang Theory” spin-off “Young Sheldon” offered May an earlier, funnier on-screen role, as did her 2018 Netflix series “Alexa and Katie.” Since that fateful year, May’s star power has only grown thanks to numerous movie roles and small screens. In her first major role, Isabel May played one of the main characters Alexa and Katie, but the cancellation of the show after two seasons freed her up for other projects.

Before appearing in Alex and Katie, Isabel May spent several barren years auditioning as a teenager. Unfortunately for the future star of 1883, she failed to get a single role in the first three years of audition. When May turned 16, her parents decided to transfer her schooling to online training to facilitate her acting skills. Although the actor’s role as Georgie’s love interest in “Young Sheldon” was still a long way off, it turned out to be a key decision when it came to promoting May on screen.

Before she played Georgie’s rebellious girlfriend Veronica in the second season of “Young Sheldon,” Isabel May had great success getting the lead role of Katie in the Netflix series “Alexa and Katie.” Although it was her first acting job, Alexa and Katie gave May experience in comedy, which proved invaluable when she auditioned for a supporting role in the 2nd season of “Young Sheldon”. The constancy of her work on Alexa and Katie also allowed May to work on independent feature films. outside of the show schedule, for example, Run Hide Fight 2020 and Let’s Scare Julie 2019. Also during her time in Alex and Katie, May landed a role in Young Sheldon, playing Georgie’s church-obsessed friend Veronica.

The role of Isabel May in “Young Sheldon” — “Who was Veronica?”

Isabel May’s career may have really started with the role of Veronica. Veronica was originally introduced as a hell-raising love interest that Georgie pursued throughout seasons 2 and 3 of Young Sheldon. At first, Veronica was portrayed as drinking and smoking, a bad influence on Georgie, but as the season of “Young Sheldon” 2 showed more of the character of Isabel May, Veronica became much softer in the sitcom. Veronica from May made a complete 180-degree turn in terms of character when she found God and dedicated her life to Jesus, which eventually led (albeit indirectly) to Georgie’s breakup with her. The couple realized that they were no longer working when Veronica became interested in religion more than their relationship, as a result of which the couple broke up in the third season of “Young Sheldon”. Since then, Veronica has not been seen, and although some fans of “Young Sheldon” claim May’s character, the success of the actress means that she will no longer be able to return to the spin-off “The Big Bang Theory”.

After her participation in “Young Sheldon” and the cancellation of “Alexa and Katie”, May auditioned in 1883. The prequel series, which preceded the events in Yellowstone, 1883, was a western, the action of which took place in the title era. May auditioned and got the key role of Elsa Dutton, which gave the actress the most high-profile lead role in her career. While 1883 used Elsa as the show’s narrator, this did not prevent the heroine from succumbing to a tragic fate at the end of season 1. However, this experience has allowed May to work with industry veterans such as 1883 star/veteran westerns Sam Elliott and Tim McGraw. , while the series also introduced her to a wide audience of the show. Only the debut episode of “1883” gathered almost 5 million viewers, proving that May’s role as the heroine of the show will provide her with all sorts of opportunities now that the star is well known to a huge audience.

Related: 1932: Everything We Know about the Yellowstone Spin-off

Isabel May’s career rise came at just the right time for the actress, as her films before 1883 struggled to make a big impact after the cancellation of “Alexa and Katie” and the end of her role in “Young Sheldon.” Run Hide Fight was met with mostly negative reviews, and the film’s release was marred by a controversial scandal surrounding its original distributor, Cinestate, while Let’s Scare Julie received similarly negative reviews and had little impact on its limited release. Thus, although Elsa Dutton from 1883 did not last long, she still changed the career of the young actress Sheldon Isabel May.

Vikings: What Happened To The Real Lagertha From Real Life Outside...