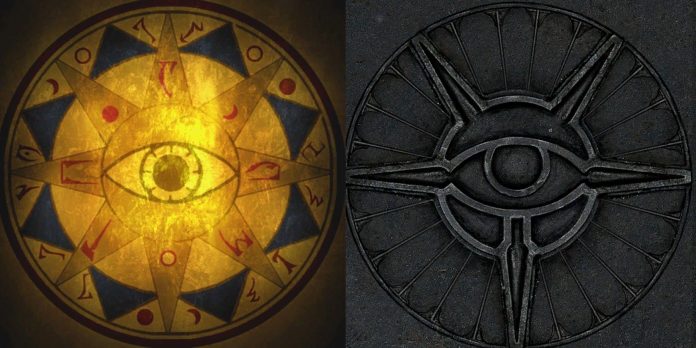 The Elder Scrolls world is one steeped in magic, so it makes sense to give players the option to join magical factions. In Oblivion, the Hero of Kvatch can become a member of the Mages Guild. Meanwhile, Skyrim allows the Last Dragonborn to become a student at the College of Winterhold.

Though these are two different factions, they serve as the magic-based guilds of each game, and the community has discussed both of them in length. But picking the “better” guild is no easy task, as the factions have their upsides and downsides. Still, it’s interesting to compare and contrast the two to pinpoint where each title went wrong and what could be improved for the next iteration of The Elder Scrolls series.

The Mages Guild of The Elder Scrolls 4: Oblivion

The Mages Guild in Oblivion spans across the entirety of Cyrodiil, having branches in each main city. However, its main institution is the Arcane University, located in the Imperial City of Oblivion. To join and become a magic scholar, players must travel to each of the seven branches of the Mages Guild and ask for a recommendation from the head mage. This is already a challenging task, as each head mage will send the player on a quest to prove their prowess.

Once the player has all the recommendations, they’ll become an Apprentice under the Mages Guild and gain access to the facilities within the Arcane University. Though as the questline progresses, it’s revealed that the Mages Guild is warring with a group of necromancers in The Elder Scrolls. This conflict apparently stems from the current Arch-Mage’s decision to ban the practice of necromancy among members of the guild.

The player is then roped into the guild’s necromancy issue, with the ensuing quests centering around their investigation into whom is behind the conflict. Eventually, it’s revealed that a powerful necromancer known as the King of Worms took advantage of the necromancy ban to recruit new followers and start a war against the Mages Guild. By the end of the questline, the player faces off against the King of Worms – one of the most powerful mages in Elder Scrolls lore – and becomes the new Arch-Mage.

The College of Winterhold of The Elder Scrolls 5: Skyrim

Once the player passes the initial test, they’ll gain access to the College. There, they’ll attend a few magic classes, meet their fellow students, then head straight to a draugr-infested dungeon, Saarthal. In the depths of the ancient city, the player then discovers a powerful magical artifact – the Eye of Magnus – and it becomes the focal point of the proceeding quests. By the end of the campaign, the player successfully deals with the Eye as well as those who sought to misuse its power with help from a mysterious magical organization known as the Psijic Order in Skyrim.

While the main questline of Skyrim’s College of Winterhold is much shorter than that of the Mages Guild, the faction somewhat makes up for it by offering optional quests. A majority are radiant quests, but some are one-time offers that delve into other NPCs within the faction, most notably the other three students. For instance, J’zargo – who happens to be one of the best followers in Skyrim – offers a quest where the player must test out his new fire spell. Though short, the quest showcases a bit of J’zargo’s character, making him a step up from the more forgettable NPCs of Skyrim.

Oblivion’s magical faction is better than Skyrim’s when considering campaign length and quest quality. When joining the Mages Guild, the player is made to work for their spot within the faction. Thus, ranking up from Apprentice to Wizard, and eventually Arch-Mage, feels satisfying. There are also enough quests that allow the narrative to progress at a decent pace. Additionally, the recommendation quests at the beginning of the campaign introduce notable characters that play a larger role later, making for a more interesting questline.

In contrast, Skyrim’s College of Winterhold falls short when compared to the Mages Guild, as the entire questline feels rushed. For instance, the Psijic Order was introduced but barely explored, so the secretive group feels shoehorned into the narrative. Had it been given more context, like the Augur of Dunlain, the Order might have added more to the story. Moreover, the player’s inevitable promotion to Arch-Mage doesn’t feel as satisfying. Many players have said that they didn’t feel deserving of the title, especially since they jumped from student to Arch-Mage almost immediately.

Still, Skyrim’s magical faction trumps the Mages Guild in terms of its optional quests. Though the faction has been criticized for having very few NPCs, each of them has their own little quests for the player to complete. There are even unmarked quests, which are some of the most interesting in the College, most notably the “Forgotten Names” quest, which explains Skyrim’s Midden Incident.

Overall, Oblivion’s Mages Guild questline is better for having the more coherent campaign. However, some side quests would have made the faction feel livelier. Meanwhile, Skyrim’s College of Winterhold is better for having those optional quests. Its main narrative certainly had potential, but it was simply too short and not fleshed out enough, making it far less compelling than the Mages Guild campaign. These factors should be taken into account for The Elder Scrolls 6’s magical faction, as a group with a compelling questline and fun optional quests would no doubt be a step up from both predecessors.