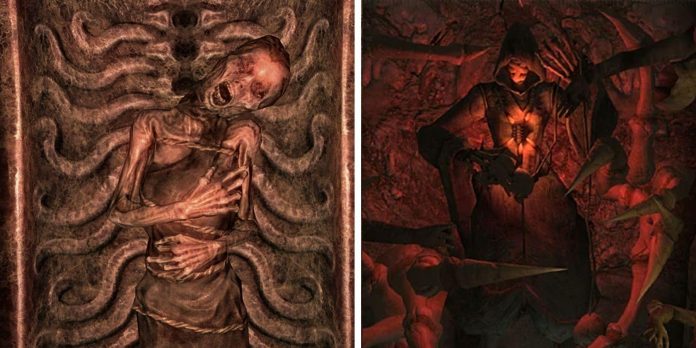 The Dark Brotherhood is one of the most iconic factions in The Elder Scrolls series. Known for its connections to Sithis and his bride, the organization is a cult of assassins who’ve sworn to kill in the name of the Night Mother. In-game, the Dark Brotherhood has some of the most enjoyable quests in the game as it challenges the player to take out targets in specific ways.

This is certainly the case in Oblivion and Skyrim — the most recent single-player Elder Scrolls games. However, there’s been plenty of debate in the community as to which title did it better. Admittedly, it isn’t easy to come up with a categorical answer as both questlines have their fair share of pros on cons, but it’s worth comparing and contrasting the Dark Brotherhood quests of Oblivion and Skyrim.

RELATED: Why Skyrim Remains So Popular

The Dark Brotherhood of The Elder Scrolls 4: Oblivion

The Dark Brotherhood questline in Oblivion officially begins when the player kills any “innocent” NPC. This can be anyone from a town guard to the Adoring Fan. Doing so will prompt an ominous system message that reads, “Your killing has been observed by forces unknown…” Should the player then sleep in a safe location, a man named Lucien Lachance will wake them and send them on an initiation quest, “A Knife in the Dark.” Upon completion, Lachance will show up again and welcome the player to the Dark Brotherhood.

Following their recruitment, the player will need to accomplish multiple assassinations. Though these are essentially “filler” quests that lead up to the main conflict within Oblivion’s Dark Brotherhood, they’re still very enjoyable. This is primarily because the assassination quests offer bonuses should the player execute the target in a specific way. The “Whodunit?” quest, for example, is one of the most memorable in Oblivion. Here, the player must enter a mansion along with five other guests and kill them off. Accomplishing this without being caught as the murderer grants the player a bonus.

Once the player climbs enough ranks within the Dark Brotherhood, they’ll be called on again by Lucien Lachance of Oblivion, who reveals that there is a traitor among the Dark Brotherhood. This is where the questline delves into the organization’s internal conflicts. Though the ensuing quests arguably aren’t as fun as the initial ones, they’re more emotionally charged as the player not only purges the Dark Brotherhood Sanctuary but must also see Lachance killed. Even though the player beats the traitor in the end, it’s still a bittersweet victory.

The Dark Brotherhood of The Elder Scrolls 5: Skyrim

The Dark Brotherhood questline in Skyrim begins when the player “steals” a kill from the organization. This is done by killing Grelod the Kind for young Aventus Aretino. After doing this, the next time the player sleeps in a safe location, they’ll wake up in the Abandoned Shack, where Astrid will try to recruit them into the Dark Brotherhood of Skyrim.

The assassination quests in Skyrim aren’t as challenging as those in Oblivion as the former doesn’t offer bonus rewards for killing the target in a specific way (save for a few exceptions). Still, the overall questline for Skyrim’s Dark Brotherhood is far grander in scheme, compared to Oblivion’s. Rather than just focusing on the organization’s internal conflicts, Skyrim’s Dark Brotherhood introduced a lofty goal: to kill an Emperor.

Thus, the “filler” quests are simply interspersed between the player’s main tasks, which set up the plan for the Emperor’s assassination in Skyrim. The way Cicero and Astrid butted heads also added to the overall story as the insane jester represented the organization’s old ways, while Astrid stood for more modern principles and independence from the Night Mother’s grasp. In the end, the Night Mother’s influence wins over Astrid’s beliefs, but not without help from the player.

RELATED: Where Each of Skyrim’s Jarls Fall on the Civil War

Oblivion trumps Skyrim in quest quality and replayability. This is because so many of the quests can be completed in different ways, and there are more assassination contracts in Oblivion, in general. Thus, players often feel more like an assassin there than in the Skyrim questline. The fact that completing these quests also increased the player’s rank within the organization also gave a better sense of progression and pacing.

That said, the Skyrim Dark Brotherhood had far more memorable characters — most notably, Cicero of Skyrim. Though both the Oblivion and Skyrim assassins are interesting in their own right, Cicero blows everyone out of the water with his excellent voice acting and genuinely unhinged behavior. Astrid, though not as compelling, is also a serviceable minor antagonist in the narrative. Skyrim also has a somewhat better endgame than Oblivion’s Dark Brotherhood since the player unlocks a new Sanctuary and can outfit it with new furnishings.

Another thing worth noting about the Skyrim Dark Brotherhood questline is that the player can choose to go against the organization. Though the “Destroy the Dark Brotherhood!” route isn’t nearly as complex as the faction’s main questline, the option is still there, giving Skyrim a bit of a leg up on Oblivion.

To sum it all up, Oblivion’s Dark Brotherhood arc is better for its quests, while Skyrim’s is better for its characters, plus its endgame options. The narrative for both questlines is good, but they would have benefited from a little more attention to detail. For instance, Oblivion’s twist would have been better if the traitor was hinted at more, while Skyrim’s would have improved from a more pronounced conflict between Astrid and Cicero.

All this should be taken into account for The Elder Scrolls 6, as a Dark Brotherhood questline with quests like Oblivion’s and characters like Skyrim’s would be top-notch. Wrap those together in a compelling narrative, and it’s bound to be an enjoyable questline. It’s also worth crafting an alternative route for players who want to defeat the Dark Brotherhood as this adds to The Elder Scrolls 6’s replayability while also improving its roleplaying potential.

Star Wars Visions: When It Opens On Disney +, Trailer And...