Home Entertainment The Elder Scrolls 6: The Story of Hammerfell 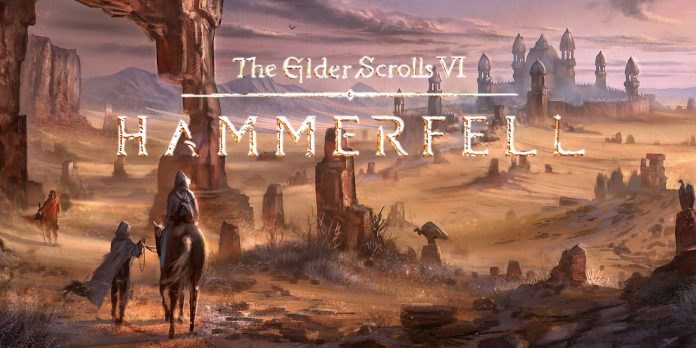 It’s no secret at the moment that Hammerfell Province is largely considered a potential setting for the highly anticipated The Elder Scrolls 6. Being a relatively unexplored but vast province, it’s clear why many longtime fans are so deeply excited about the prospect of Hammerfell finally getting the attention it deserves.

If The Elder Scrolls 6 takes place primarily in Hammerfell, then, of course, it will have to demonstrate the vibrant culture and geopolitical position of the province. In order to evaluate this image effectively and accurately, an informed understanding of Hammerfell’s deeply rich history is essential.

The Elder Scrolls 6 — Hammerfell in the First Era

Hammerfell in the First Era was very different from what it would become later, initially being a largely uninhabited and inhospitable expanse of earth. In the beginning, the province was sparsely populated by ancient Elven groups on small sections of the Hammerfell coast.

The real colonization of the province occurred only in 420, when the historical race known as the Dwemer began to densely populate the earth. Dwemers are one of the most fascinating races in The Elder Scrolls, largely because of the huge level of mystery that surrounds them. A technologically advanced race of Dwarves, some Dwemers inhabited Hammerfell until their unexplained and still debated disappearance in the year 700.

The lost Dwemer cities still remained in Hammerfell, and many fans speculated that Dwemer designs could replace the role of dragons in The Elder Scrolls 6. For more than a century, Hammerfell remained ominously uncivilized until the mass arrival of Ra Gad or Redguard, 808. The Red Guard originally originated from the Yokuda continent, landing on the shores of Hammerfell only after their homeland sank. A fierce and powerful warrior race, the Redguards quickly took control of the province, trying to preserve the culture and traditions of Yokuda.

The Elder Scrolls 6 — Hammerfell in the Second Era

Thriving holistically throughout Hammerfell, unlike any other previous inhabitants, the Redguards quickly established themselves among the diverse races of Tamriel. Within the Redguards, two separate groups were formed, known as the Crowns and the Ancestors.

The ancestors are proud of their Yokudan heritage and the culture it possesses, but they are distinguished by a relatively higher level of acceptance of the rules and customs of Cyrodiil, the province considered the most powerful in all of Tamriel. On the other hand, the Crowns firmly adhere to their commitment to Yokudan culture, criticizing the Ancestors for worshipping Tamriel gods and their attempts to assimilate the two cultures.

Hammerfell inexorably plunged into civil war due to the opposing ideologies of these two key groups in the year 862 of the Second Era. As the Ancestors were on the verge of defeat, they agreed to a pact with Tiber Septim, the leader of the Cyrodiil Septim Empire, to ensure their victory at the cost of Hammerfell’s loyalty and loyalty to imperial rule. As expected, this occupation met with serious resistance: the Empire eventually removed its military presence from Hammerfell and became more receptive to Yokudan culture by the end of the Second Era.

The Elder Scrolls 6 – Hammerfell in the Third Era

The level of barbarism and treachery demonstrated during the Civil War will continue significantly throughout the history of Hammerfell in the Third Era. As tensions between the Forerunners and the Crowns reached an understandable peak, neither of them came to the aid of the other during a series of attacks on the Redguard lands.

This internal unrest in the province allowed neighboring forces to seriously impose themselves on Hammerfell, which led to the cession of important lands to other provinces. For example, the Nords, as is known, captured the city of Dragonstar in 396 of the Third Era, while the strategic city remained half under the rule of the Nords until the Fourth era.

Due to the widespread land grabbing taking place in Hammerfell, the Sentinel and Daggerfall kingdoms have started a feud with each other over the ownership of Betony Island in Hammerfell. After that, many other kingdoms and factions laid siege to Hammerfell, as a result of which the resulting chaos was mysteriously corrected in a phenomenon known as the Miracle of the World, in which it is believed that the factions involved destroyed each other. As a result, many city-states were virtually destroyed, which led to the fact that the Crowns and Ancestors again controlled large swathes of Hammerfell territory.

Mozilla Firefox Will Be Distributed On The Microsoft Store