Home Entertainment The Elder Scrolls 6: The History of High Rock 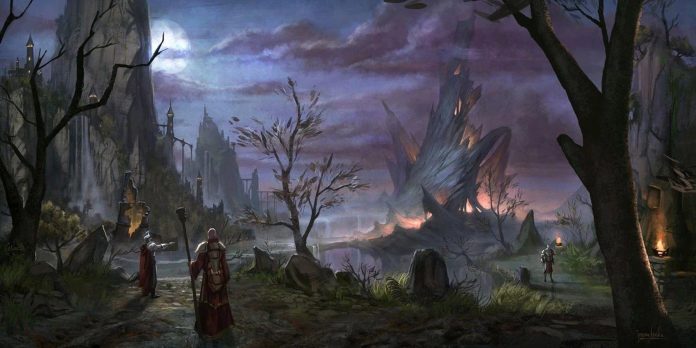 The best fantasy properties are often those that immerse the reader, viewer, or player in their worlds, where through descriptions or physical maps, fans are able to imagine themselves walking the streets, climbing the mountains, or sailing across the world’s various continents. Titles like The Witcher 3, Harry Potter, and of course, The Lord of the Rings all share this common trait, making their environments and worlds just as important as their characters and plot. The Elder Scrolls franchise does exactly the same.

Morrowind, Skyrim, and Daggerfall are all just a handful of areas in The Elder Scrolls that have each become instantly recognizable fantasy locations. With each new entry in the franchise, the world becomes even bigger, and more cities and civilizations are fleshed out. According to the latest rumors, The Elder Scrolls 6 is set to introduce players to High Rock, a Northwest region of Tamriel that’s home to the Breton civilization. Along with some iconic cities, High Rock has a rich history, boasting some of the most interesting lore in the Elder Scrolls franchise.

RELATED: Skyrim: The Lore Behind Uthgerd the Unbroken

The First Settlers of High Rock

At the beginning of recorded time, in an age known as the Dawn Era, High Rock was first settled by the Aedra, a group of immortals that were the progenitors of men. Although most of their structures have been lost with time, one lone Aedra Adamantine Tower stands tall on an island in the Iliac Bay, marking the site of ancient meetings.

After creating Mundus, the Aedra either returned to their home of Aetherius, or were left to become mortals on Nirn. Over time, the Aedra died out, and left only their half-breed descendants on Nirn, some of which became a primitive race of humans known as Beast Men. These Beast Men are believed to have inhabited High Rock, though they were eventually forced out by the Aldmer, who immigrated from the Summerset Isles.

According to legend, a Nedic tribe once attempted to settle in High Rock in the Merethic Era, but upon seeing the advanced Aldmer civilization, were integrated into its society. This eventually led to cross-breeding between the Aldmer and Nedic people, leading to human-elf hybrids known as Bretons.

The Wars for High Rock

In the first era, the Aldmeri Clan Direnni were seen as one of the highest powers across Tamriel, let alone in High Rock. With both an economic and military force behind them, Clan Direnni began conquering the land surrounding High Rock, taking territory that once belonged to Hammerfell and Skyrim. However, as their influence grew, their forces were stretched thin, leading to the Direnni Clan’s eventual downfall.

In the rubble of the Direnni Clan’s war for High Rock, the Bretons reared their heads. Over the course of a few hundred years, the Bretons had slowly grown in numbers, and had placed themselves in key locations across High Rock. Eventually, through an advanced economic system, the Bretons were able to become the dominant force in High Rock and were even able to assimilate Nordic cities like Daggerfall. But with the Bretons now in control, and no single leader to guide the way, a power struggle brewed.

While individual Breton fiefdoms occasionally fought each other for land and power, the real threat was foreign invaders, who saw the lack of unification in High Rock as a clear opportunity. Late in the first era, the Redguard race began to invade Hammerfell, but soon stopped their attack when the Orc kingdom of Orsinium was first discovered. Being viewed as savage and unruly beasts, the Orcs became the number one enemy of both the Bretons, and the Redguards, who formed an alliance to deal with this supposed threat.

After the destruction of Orsinium, the Redguards returned to their land, and High Rock enjoyed another century or so of peace. In the Second Era, Tiber Septim amassed a force of unrivaled strength to conquer High Rock, but to his surprise, a good portion of its citizens welcomed the Empire with open arms.

One of the key traits of the Breton race, and High Rock as a nation, is that they’ll often stand in the face of insurmountable odds, and somehow persevere and survive. The perfect example of this occurred in the Third Era, when the Camoran Usurper marched their troops North in an attempt to steal control of Tamriel away from the Empire. Though they faced an overwhelming force, the small fishing villages surrounding Iliac Bay were able to stand together and defeat the Camoran army.

In the several centuries that followed this conflict, a number of smaller wars would occur across High Rock, with the Nords reclaiming some of their original kingdoms, while some Breton subsects continued to fight in civil wars. Toward the end of the Third Era, an event known as the Miracle of Peace, or the Warp in the West occurred. Just above Illiac Bay, a mysterious explosion erupted across the water. This shockwave traveled across High Rock and destroyed countless homes. However, through shared grief, the Breton race was able to unify once more, and the otherworldly event became the reason behind High Rock’s unification.

In the fallout of the Miracle of Peace, High Rock’s countless fiefdoms began joining together, until eventually, just five large kingdoms remained. At the South of High Rock stands Daggerfall, an already prosperous city only made all the more rich and powerful through expansion and unification.

Though Orsinium had been destroyed centuries ago, it had been reformed just before the Miracle of Peace. Following the event, Orsinium also expanded, with the Orcs’ leader Gortwog being able to conquer much of High Rock’s central regions. Although the Orcs had a reputation for being brutal in battle, Gortwog was able to maintain a high-standing with his allies surrounding Orsinium. However, much like the original kingdom, Orsinium was once again destroyed by a united Breton and Redguard force in the Fourth Era.

In the North, the kingdoms of Northpoint and Evermore expanded, but the surrounding regions of Skyrim and Wayrest proved too powerful for further expansion. Though, despite its alliance with the Orcs, Wayrest would eventually fall in a Corsair invasion. High Rock is now a relatively stable, lucrative province, one which the Empire holds in high regard.

The American Remake Of Train to Busan Will Be Released in...