Home Entertainment The debate about Darth Vader and Thrawn in Star Wars is resolved... 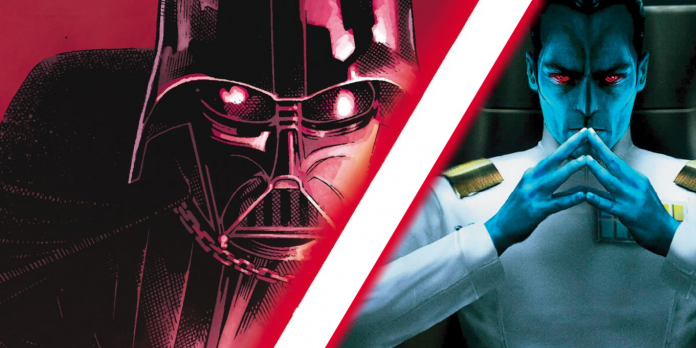 Although both of them were very effective agents of the Empire, fans of “Star Wars” like to argue about who was the greatest asset of the imperial machine — Grand Admiral Thrawn or Darth Vader. Their adventures in the sequel to “Star Wars Legends” offer many opportunities to compare them as leaders, but they also reveal one detail that forever resolves disputes.

As the Dark Lord of the Sith, Darth Vader unsurprisingly decided to spread terror on others, including his fellow Imperials. Vader’s powers inspired awe and fear in both enemies and allies, and he often used the power of the dark side of Force Strangulation to execute imperial military officers who, in his opinion, were to blame for the hostilities. However, despite his brutal, draconian methods, Darth Vader did not kill every subordinate who displeased him. Admiral Piett repeatedly failed to capture the crew of the Millennium Falcon in The Empire Strikes Back, but he was spared, probably because none of these cases were related to factors under his control, and otherwise he proved himself a competent leader. Mills Gil, once an admiral in the Imperial Navy, took responsibility for not being able to catch Tweel for the Empire, but because Vader saw his admission as a sign of honesty, he was spared, although he was demoted to the rank of lieutenant.

Grand Admiral Thrawn has similar traits to Darth Vader, as shown in Issue 3 of Heir to the Empire by Mike Baron, Olivier Vatin and Fred Blanchard. When Chris Peterson, a conscripted member of the Imperial Navy, tries to shift the blame for his failure to capture Luke Skywalker onto his commander, Thrawn executes him on the spot. His replacement, Reilly Mitel, is unable to catch Skywalker by another method in “Last Order”, but takes responsibility for his failure, and Thrawn subsequently promotes him to lieutenant, who notes his creative thinking.

The key difference between Thrawn and Darth Vader is that while both deserve the respect of many of their subordinates and inspire fear in others, Darth Vader’s decisions are often based on emotions, and Thrawn’s decisions are logical. This is appropriate, since possession of the dark side of Darth Vader requires him to submit to his emotions, but this leads to inconsistent behavior. While Gil was spared for admitting his failure to Vader, Captain Nida wasn’t so lucky in Empire Strikes Back, and Vader killed many under his command simply to express frustration or lash out at the restrictions placed on him by Emperor Palpatine.

Thrawn and Vader both ruled by fear, although each of them was willing to spare those who were clearly still useful to their efforts. However, Thrawn is much more sober about this process and is even willing to promote those whose failures demonstrate qualities that he knows will benefit the Empire later. On the contrary, Darth Vader’s judgment depends on his temperament, and it cost the soldiers of the Empire who might otherwise have risen through the ranks to-ironically-become the next Thrawn. While Darth Vader has the power of the dark side at his beck and call, Grand Admiral Thrawn’s more tactical treatment of those he commands makes him much better than the imperial leaders of Star Wars.