Home Entertainment The death of the main character of “Stranger Things 4” avoids the... 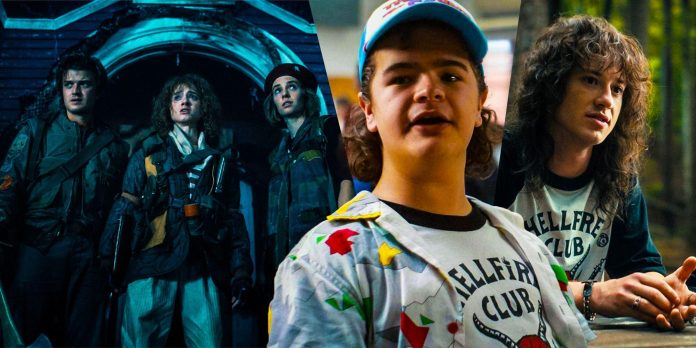 Eddie Munson’s fate in Stranger Things’ season 4 finale avoided the show’s problem of making its big deaths the products of unlucky circumstances. While Eddie Munson (Joseph Quinn) quickly became one of the most beloved characters of Stranger Things, the show unsurprisingly repeated its trend of killing off new characters in the same season that they were introduced. However, Eddie’s ending was remarkably different from the major fatalities in previous seasons in regard to how the Upside Down’s monsters killed him, which makes his tragic fate the most compelling character death yet.

Stranger Things season 4 continued to avoid killing off any of its core characters from the Hawkins crew but still featured a few notable death twists. After he was originally believed to have perished in Stranger Things’ season 1 finale, Dr. Martin Brenner finally met his end in Stranger Things season 4. The character was gunned down by the military while trying to escape the Nina Project Lab with Eleven, who refused to forgive him as he drew his last breath. After using high school bully Jason Carver as a major antagonist, Stranger Things’ season 4 finale saw him die a gruesome death as he was split in half by the Upside Down’s gates opening in Hawkins. Meanwhile, Max Mayfield briefly dies from Vecna’s tortures before Eleven uses her powers to resurrect her, though Max is still left blind, comatose, and with broken limbs. The biggest death of all was that of Eddie Munson, who sacrificed himself in the Upside Down to save Dustin and the town of Hawkins.

Eddie’s death came full circle with his arc in Stranger Things season 4, which saw him finally deciding to not run again as he always had. Finally overcoming what he perceived to be cowardice, Eddie Munson ran back into the Upside Down and led a full swarm of Demobats away from the house and toward himself, where he stood his ground with a shield in hand as they attacked him. Eddie soon died from his Demobat wounds, making this the first major death in Stranger Things in which the character was facing death head-on, choosing to stay and fight the Upside Down even though he could have made it out safely. As compared to Barb, Bob, Alexei, and Billy in Stranger Things seasons 1 through 3, the consequences of Eddie’s death were showcased in a more immediate and emotionally devastating manner and were made more heartbreaking by Eddie selflessly accepting his fate.

Eddie had one of the first true fatal redemptive arcs in Stranger Things, as short-lived as it was. This was the exact same reason why many worried Steve Harrington would die in Stranger Things season 4, as he had already fulfilled a redemptive arc after season 2. Having been considered a “mean and scary” individual by his classmates, Eddie’s death would prove that he was actually the opposite by sacrificing himself to save all of those who hate him. He also often considered himself a coward for running away when situations get tough, such as when Chrissy Cunningham died in Stranger Things’ season 4 premiere, but this was actually a reasonable response for the circumstances. To redeem himself in his own eyes rather than anyone else’s (as his sacrifice would receive no praise from anyone but Dustin and his uncle), Eddie refused to run when facing the Demobats in the Upside Down, solidifying himself in that moment as the hero he never thought he would be. While Eddie had already proven himself a hero long before his fatal sacrifice, his death was a fitting end to his Stranger Things arc.

Part of why Eddie had to die in Stranger Things season 4 was that Hawkins’ residents needed a scapegoat for the unexplainable devastation to their town. They wouldn’t have the slightest knowledge of the Upside Down taking over Hawkins or Vecna’s plan, so falsely blaming Eddie Munson for the devastation as the leader of a “Satanic cult” may have been easier to accept over no explanation whatsoever. Had Eddie survived, he still would have been living a life on the run, as Hawkins likely would have made it impossible to clear his name – even if the rest of town discovered Vecna/Henry Creel was behind it, some inevitably would have claimed Eddie was working with him.

Stranger Things has seen several beloved characters die before Eddie, but their fates never felt as clearly justified or weren’t treated with such care and respect as the season 4 character. Much of the problem with Stranger Things’ previous deaths involved their circumstances, which largely played to the “wrong place, wrong time” or almost evading the monster tropes. Barb was simply sitting on the diving board of Steve’s pool until a Demogorgon snatched her out of nowhere, with the impact of her death also being noticeably sidelined in Stranger Things season 1. Unsurprisingly, this launched a “Justice for Barb” campaign by fans, which sought to give her death more importance in the series after being ignored.

While Stranger Things’ season 2 character Bob Newby had one of the most upsetting deaths of the series, it was another occasion in which he didn’t think he was going to die. In fact, Stranger Things had made it seem like Bob had successfully outrun the Demodogs in Hawkins Lab before suddenly showing the monsters breaking through the doors and killing him. Bob’s death was certainly heroic and would continue to haunt Joyce Byers, but seemed to be used for shock factor within the moment. Stranger Things season 3 had a similar problem with the death of the Russian Dr. Alexei, who, like Barb, fell into the “wrong place, wrong time” category. After joining forces with Hopper, Joyce, and Murray to avoid being killed by the Upside Down-experimenting Russians, Alexei was happily and innocently enjoying the 4th of July festivities until Grigori suddenly and swiftly walked by and shot him. Alexei’s death also received very little attention from Stranger Things’ characters, with even Murray failing to mention him in season 4’s Russian subplot.

Eddie may have the most devastating sacrifice in Stranger Things, but he wasn’t the first to die in order to save the other Hawkins characters. Stranger Things’ season 3 finale saw the antagonistic Billy Hargrove ultimately sacrifice himself against the Mind Flayer, though it was hinted that he would have died either way. Additionally, Billy’s death was preceded by his becoming a host to the Mind Flayer, which saw him dragged into an abandoned building in yet another “wrong place, wrong time” incident. While Billy had been forced to carry out many of Stranger Things season 3’s fatalities, he would briefly be able to overpower the spider-like Mind Flayer’s control with the help of Eleven, which led to him directly facing the Upside Down monster and being killed. However, Billy’s death was undermined by the fact that he was a major villain in the show even before he became possessed by the Mind Flayer, with his heroic sacrifice still not serving as a complete redemption of his character. Before Eddie, Stranger Things didn’t have an inherently heroic death.

Why Eddie Had The Best Stranger Things Death

Although Stranger Things season 4 still couldn’t take the plunge and remove one of the core characters, Eddie is the closest the series has come to killing off a main protagonist. While Eddie was only in one season, he was situated as a major character who was fully integrated with the Hawkins group with his own beloved storyline. Barb’s role in Stranger Things season 1 was only in relation to Nancy, Bob only appeared in a few episodes with Joyce and the Byers family before dying in season 2, Alexei was only in four episodes before his death, and Billy was still far enough removed from the main group to be less devastating for the other characters outside of Max. Eddie, however, formed significant relationships or rapport with all of the characters in Stranger Things’ Creel House storyline well before he made the ultimate sacrifice, even if the season 4 finale rushed the aftermath and impact of his death in Hawkins.

Unlike the other devastating deaths in Stranger Things, Eddie’s death scene was a beautifully gut-wrenching moment, with the effects of his sacrifice being incredibly powerful in the story. Eddie was able to accept his death in the moment, pass on his legacy through Dustin Henderson, and feel that his sacrifice was truly worth it when he saw that Dustin was safe. Unlike Billy with Max, Eddie Munson’s death won’t be conflicting for Dustin in terms of whether it was a relief or a completely harrowing fate. Despite having just been introduced in season 4, Eddie never felt like a disposable addition to Stranger Things’ story, which is a testament to just how incredibly powerful his heroic death was to cause such anguish among fans and characters alike. Storywise and in terms of his choice to fight the Upside Down, Eddie has the best death of Stranger Things so far.

All episodes of Stranger Things season 4 are available on Netflix