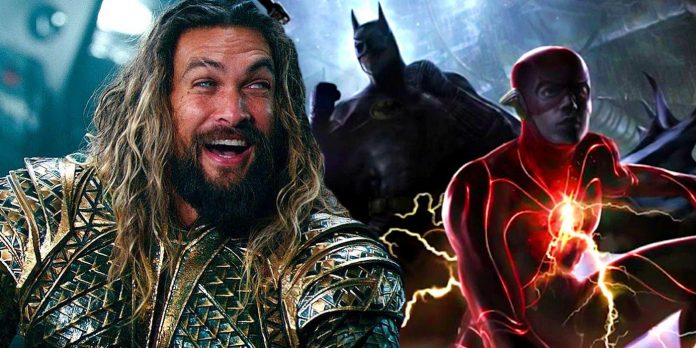 It’s already clear that the DC Extended Universe is set to expand significantly in scope in 2023, but very little was done to promote the franchise’s future at Comic-Con 2022. Though DC’s big cinematic franchise may have gotten off to something of a shaky start, Warner Bros. certainly appears to be willing to invest in the future of the DCEU. The early entries into the DCEU remain divisive, but they have still laid the foundations for a number of interesting and highly-anticipated stories, with appearances from multiple major DC characters in the works for future movies.

The DCEU reveals from San Diego Comic-Con 2022 paled in comparison to those of its Marvel counterpart, but there were still teases of DC’s cinematic future. These came in the form of exciting reveals of elements of Black Adam and the Shazam 2 trailer, both of which are set to release in the latter half of 2022. Though Black Adam will introduce one of DC’s most powerful villains and Shazam! Fury of the Gods’ trailer has teased greater connectivity within the movies of the franchise, DC’s Comic-Con focus being specifically on its 2022 titles seemed like an odd choice.

The lack of details regarding The Flash or Aquaman and the Lost Kingdom was a strange decision for the DC Comic-Con panel. So far in the DCEU, the Flash and Aquaman have been two of its most important characters, with both heroes serving as founding members of the franchise’s Justice League, and The Flash in particular is set to be the most important DCEU movie to date due to its Multiverse story expanding the scope of the franchise. The omission of details or reveals regarding the two 2023 movies ultimately contributed to a disappointing DC panel at Comic-Con 2022, because it failed to address the franchise’s ambitious and intriguing future. However, while the approach might seem confusing, it could also be a deliberate effort to both open up the DCEU to new characters and move the focus away from the Zack Snyder era.

2023 is already set to be a pivotal year for the DCEU. The most obvious reason for this is the way in which The Flash is set to shake up the franchise by marking the (reported) final appearance of Ben Affleck Batman and the introduction of Michael Keaton’s Batman into the DCEU. In introducing the concept of alternate universes and travel between them, The Flash will open up the DCEU, increasing its scope and narrative potential massively. What’s more, early test screenings for The Flash have it tipped as one of the best DC movies to date, meaning that it’s one of the DCEU’s most-anticipated movies.

It’s not all about The Flash’s Multiverse story, though – Aquaman and the Lost Kingdom will continue the story of one of the DCEU’s best-regarded movies to date, with megastar Jason Momoa returning to fill the title role. 2023 will also finally see the release of Batgirl and Blue Beetle, two popular DC heroes who will also help flesh out the DCEU’s ranks. The scope of the DCEU is set to expand massively in 2023, and with The Flash already being considered one of the franchise’s best movies, it’s entirely possible that DC’s cinematic franchise will rule 2023.

From the way that Warner Bros. handled the DC panel at Comic-Con 2022, it’s clear that they chose to ignore their huge 2023 releases by design, and the reasoning behind this is likely twofold. Perhaps the most obvious reason is that not doing so avoids shining light on previous missteps. This may also be the reason that Henry Cavill’s Superman return wasn’t announced at Comic-Con – the character’s previous appearances have been divisive enough that focusing on that aspect of the franchise’s future only reinforces the current perception of the DCEU. However, Shazam! is one of the DCEU’s most well-received movies to date, and Black Adam and Shazam 2 both stem from a similar source – importantly, one that isn’t too close to the DCEU’s previous heroes, allowing Warner Bros. to distance the DCEU’s future from its past mistakes.

The other reason is that both The Flash and Aquaman and the Lost Kingdom focus on characters already established within the franchise. With 2022 introducing a number of new and exciting characters into the DCEU – including the Justice Society of America – that makes Black Adam crucial to the DCEU moving forward. As such, it makes perfect sense to keep the focus primarily on Dwayne Johnson’s titular character and the heroes of Shazam! Fury of the Gods.

Keeping the focus away from the DCEU’s 2023 releases may seem an odd choice for Warner Bros. at Comic-Con 2022, but it was clearly a carefully planned decision. Though it prevented any exciting announcements regarding the franchise’s existing heroes and their future within the DCEU, it did serve to further build hype for Black Adam and Shazam! Fury of the Gods, both of which are key to the franchise’s own future. By keeping tight-lipped about The Flash and Aquaman 2, Warner Bros. has subtly started to build a different sort of hype for the DCEU‘s 2023, which is already shaping up to be a pivotal year for the franchise.

See how Vecna comes to life in the 4th season of...

Why do some fans of RuPaul’s drag racing think that the...