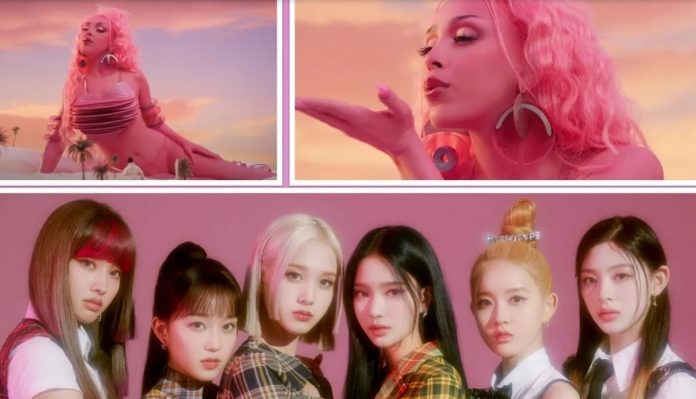 StayC idols took it upon themselves to do the best cover of a very popular Doja Cat song. Everyone has been hooked on at least one Doja Cat song and even the idols couldn’t stop playing this rapper’s hits; StayC proved her fanaticism for the singer and covered her that turned her into K-Pop.

Doja Cat has enchanted the world with its various songs , since the great success of ‘Say So’ , the rapper has not stopped and many of her compositions are among the most listened to around the world; With 62.6 million listeners per month on Spotify , we can already get an idea of ​​how many fans this singer has and that many cannot stop listening to her.

On the other hand, K-Pop is one of the most popular genres today and there we find talented singers as well, such as the idols of StayC , a young girl group within the musical genre that barely debuted in 2020, but that little by little they have been winning the hearts of their fans and creating their own story.

The combination of Doja Cat and K-Pop can result in something very cool for fans of the genre and the singer, or something interesting, different, and fresh; So StayC took it upon herself to make Doja into K-Pop and delight the world with her talents, also showing that they can be adapted to any song .

STAYC COVERED DOJA CAT OF THEIR SONG KISS ME MORE

‘Kiss Me More’ of Doja Cat was a success from the moment in which this rapper released the track, the first single from her album ‘Planet Her’ was released on April 8, 2021, and quickly became a trend of Tiktok, everyone used this theme for their videos on the platform.

Today, their official MV has more than 200 million views and it was a fact that everyone listened to this song that Doja released in collaboration with SZA ; it was a track that went around the world.

And this song was so popular that even StayC couldn’t resist and they started singing it and doing choreography for this Doja song, doing an incredible cover that turned Doja Cat into K-Pop ; obviously, this version sounds different from the original composition and the voices of the idols give it a great and special touch.

Besides creating a beautiful choreography for this great song, would you do a dance cover ?

Besides admiring the great pronunciation of the idols, they have sing the original song in English, a language outside the girls’ mother tongue; there is much to admire about them and their talent is proven even in this amazing cover.

One Piece Anime, Episode 986 Now Available: Where To Watch It...