Home Entertainment The cutscene of Jedi: Fallen Order proves that Griz is the saltiest... 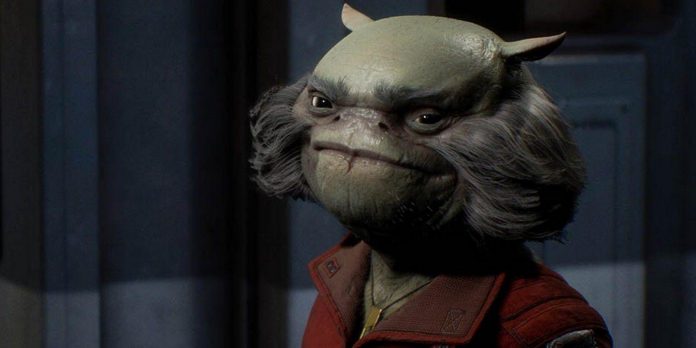 The EA Star Wars Jedi: Fallen Order role-playing game was released in 2019, but a tragicomedy involving Griz Dritus (and a ridiculous amount of salt) has recently resurfaced. The game, developed by Respawn Entertainment, will soon be continued. Jedi: Survivor, which is scheduled for release in 2023, may appear as early as March (according to the PlayStation Network database).

As for why this laugh-inducing cutscene goes around in circles, there is a connection between the events and missions of Cal Kestis‘ team and Kenobi’s latest Star Wars show. Both the game and the show are thematically centered around the Inquisitors and their relationship with the Jedi, and Cal Kestis and Obi-Wan infiltrate the citadel of the Inquisitors. With stories that are only five years apart in the canon, it’s no surprise that fans are revisiting Jedi: Fallen Order to analyze and compare them.

The cut scene, re-presented in the zeitgeist via a tweet, shows the Stinger Mantis crew sitting together at a small rectangular table for a somber meal. Cal Kestis comes from the task and sits down at the end, Griz Dritus and Tsere Junda are already sitting next to each other, and BD-1 is hanging out on the corner of the countertop. After a few seconds of anxious silence, Cere touches on a delicate topic—her capture by the Inquisitors several years ago and the subsequent betrayal of her padawan, Trilla Sudari, who was then also captured and perverted until she became the Second Sister, the deadly Inquisitor from Star Wars. . Cal looks annoyed or resigned, as Cere insists on the need to return Cordova’s holocron, and Griz awkwardly looks from one to the other, salting the food. When Cal leaves the table, BD-1 suddenly scans Griz’s food, and Griz criticizes the little droid.

The juxtaposition of Cere’s tragic past and Griz’s funny dilemma between a rock and an anvil makes this video so funny. At first, players will focus on the Camera and a very depressing topic, but replays of the scene may make them notice that Grizz has not stopped salting his lunch since the cut scene began. This was already causing surprise before the awkward conversation started, but then he gets distracted, shifting his gaze from his two teammates, and seems to completely forget that he is still salting food. The cherry on the cake is what happens after the backstory of the Fallen Order of Cere, and Cal leaves the scene. BD-1, reasonably concerned at this moment about Griz’s health, looks through his food to assess the amount of salt he added to it. Griz, probably realizing his mistake and embarrassed, sharply chastises the droid. “Hey, get your lasers off my lunch!” he snaps, as if his food is no longer edible at all.

A great story can hide humor in the darkest places, and this is true for Jedi: Fallen Order. Scenes that are unforgettable gems are not always vivid, and the best part of reliving a favorite game is discovering them. With any luck, fans will see the Stinger Mantis crew again in Jedi: Survivor and find out if Griz remains as salty as ever and how often BD-1 scans him to check how much his salt intake affects his health.

Action Comics Prove That Superman’s Powers Never Made Him Boring