Home Entertainment The cult of the lamb: tips and tricks for beginners 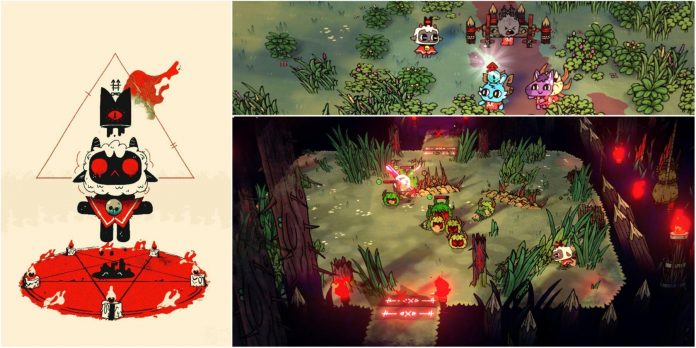 Players who like to roam roguelite dungeons like Hades and Curse of the Dead Gods should feel right at home with Massive Monster’s latest indie release, Cult of the Lamb. The delightfully devilish game is visually stunning and much deeper than it looks from the outside. After the players complete the initial videos and training combat actions, they will find themselves right in the middle of a confusing city management simulator.

This unique combination of relaxing community simulation and challenging combat creates a rather fascinating game cycle in which players will advance through the story while simultaneously creating an impressive cult of devoted followers. There is a lot of information that players will need to learn during Cult of the Lamb’s opening hours, and it’s easy to be overwhelmed by all the mechanics and tutorials presented. To help new players better adapt to the life of a cult leader, the following guide provides some tips and tricks for those who are just starting to play the Cult of the Lamb.

As soon as the players open their sanctuary, they will start receiving loyalty from their followers. This devotion can be used to gain divine inspiration points, which will allow players to discover new buildings and structures for their cult. Perhaps the most important thing, especially at the beginning of the game, is the Farm. Players should get this building recipe as soon as possible and start laying farm plots to help produce food for their needy followers.

Followers who don’t eat will become irritable, sick, or possibly even die. The lamb can use farm plots to grow berries and other ingredients so that their followers are full and happy. There are even quality farming improvements with Divine Intervention that can automate the farming process, allowing players to get their cultists to work tending crops.

Wood is of great value

When players first arrive at their new future village, they will find all kinds of trees, rocks and bushes scattered on the ground. You can interact with these items to collect wood, stone and berries. Gathering points are crucial to success in the early hours of the game as they provide food and building materials for the player’s growing herd. Unfortunately, the tree quickly becomes scarce, as players will realize that trees must grow on their land so that several pieces of lumber can be collected from them. It may take days (game time) for the trees to grow back, which means that players will be stuck waiting for precious material.

Even worse, there is not much wood during the passage of dungeons and expeditions. Players can destroy the environment in these areas to get stone, bones and grass, but trees are not usually found in the early stages. To help deal with this lumber shortage, players can build a lumber warehouse by quickly reaching level II of the Divine Inspiration Skill Tree and unlocking it. This will allow them to hire a cultist to produce wood while working in the building.

Always break the environment while going through the dungeons

When players are placed in a combat zone, they gain access to curses and weapons that they can use to damage their enemies and even break items found in the rooms of each environment. Although at first it seems like nothing more than mindless destruction, players will soon realize that they are getting materials by breaking these objects into their main components.

Players should always chop any herb (which can be used to create a grass-based food source in a pinch) that they see, as it is a great commodity to have in abundance and use in many recipes. The lamb must also destroy idols, stones, pots and everything he finds along the way, as he will be rewarded with bones, stone and other useful materials for crafting.

Players can manage their Cult as they please, but it’s hard to deny how much easier it becomes when everyone gets along with each other. A cult in chaos will not produce as much Faith, which is a vital resource for the Lamb and his hungry Crown. To better strengthen Faith, players will want to make sure that their subordinate followers are willing and willing to do everything possible to please them. This basic level of manipulation means that cultists will be happy, providing them with everything they need to thrive, while at the same time making sure that they are taken care of and not put in danger.

Happy cultists will also level up, rewarding the player with a huge amount of Devotion, and they will be more valuable to the Ancient God if they are used as a sacrifice. Once the players have gone far enough in training, they will be able to gain the ability to read the minds of their followers. This can show what a follower can struggle with, allowing the Lamb to fix the problem and gain the favor of the cultist as a product.