Home Entertainment The Cult of the Lamb: the best ways to make money 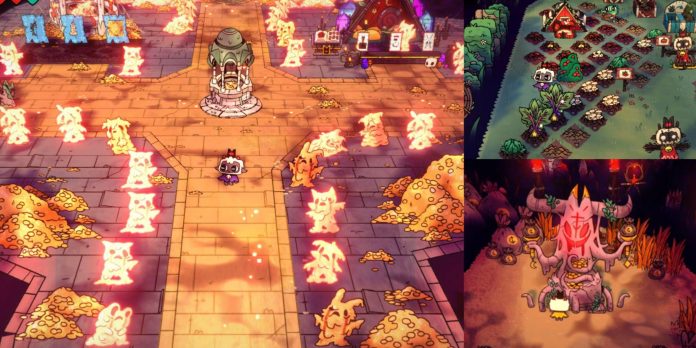 Faith and devotion are wonderful, but love cannot buy building materials or food, and every cult needs money. In the “Cult of the Lamb”, one of the tasks of building a successful church of devotees is to maintain a full treasury. There are times when the Lamb has to choose between money and devotion, with the ability to give money along with receiving it.

There are many options for making gold, including from nuggets or ingots. The Lamb can even build a guild of capitalists and materialists if they wish, but even a cult based on the nobility of poverty needs a few coins from time to time.

As a cult leader, the player decides which cult he is going to build, partly through the power of Doctrines. Some of them reject the concepts of personal ownership. Others value work and other means of earning income as more important than spiritual development. The following Teachings are the best for a Lamb who wants to make money:

Inspiration: this brings in more revenue later in the game when the inspiration tables are filled to the maximum and loyalty is converted into coins instead. Tax Inspector: Choose between money and creating loyalty at Level 4 of Law and Order. As for money, it is a tax inspector, where one follower is appointed to collect an annual tithe from others. Tithing Extortion: Each option in the “Possession” category is useful for making money or increasing the materialistic aspects of the cult. This is one of the best and most reliable ways to earn ordinary gold by generating two gold coins for each colleague every day. The Ritual of Enrichment. At level 3 of Possession, the Lamb can either take it or give it away. The obvious choice for those who want to optimize their gold is an Enrichment Ritual in which all followers shower their savior with money.

Selling Resources with a Ritual Chest

The One who is Waiting will speak directly to the Lamb when they reach an important milestone, which often means victory over one of the bishops. After defeating the first bishop, he will transfer the Lamb to his lair in the Lower World and announce a new function of the cult — a Ritual Chest.

A lamb can exchange everything in its inventory for gold using a Ritual Chest, and some items are more valuable than others. Raw materials are the cheapest, followed by seeds, and then plants. Gold bars are sold for ten gold each, which is far from the most expensive item on the list. Fish is one of the most valuable items a Lamb can sell, and an Octopus costs 50 gold apiece.

The Lamb uses the Divine inspiration gathered in the sanctuaries and followers to update his blueprints and plans for the ideal cult complex. However, this only happens up to a certain point, and then instead Inspiration is rewarded by the Lamb with coins.

This means that every sanctuary in the region, not just in the Lamb’s territory, has become a coin generator. By the time the tables of Divine Inspiration are filled, the Lamb will have devotees in every place they can visit. Examples include Mushroomos with a small temple, which is now in the Sozo room; Light Pilgrims worshipping in the Lighthouse; and a shed near Ratau’s Lonely Hut.

As the Lamb continues his crusade, they find a creepy statue somewhere in a Silk Cradle along with an old sign, and the Midas Cave opens on the map. Lamb has to spend money before he can succeed here, but the long-term investment is worth it, especially if the player has reached the point in the game where Inspiration and Loyalty translate directly into a gold coin.

Buy new blueprints, follower forms, Tarot cards and even Divine Inspiration on the shelves in the cave of Midas. Once there are enough coins in the Lamb’s pocket, they can use the altar in the center of the room to make an offering. The golden gods will wait three days before rewarding the Lamb by increasing the initial offering. It is also possible that their gesture will be rejected, and the only response will be a handful of poop.

The higher the stakes, the more Lonely Shack players there are, and it is most profitable to play Shrummy, not Ratau, Flinky or Klunko and Bop. Shrumi is the most difficult opponent, but he also allows the highest bid of 50 gold per game.

The downside here is that Knucklebones is a gambling game. Unlike any other way of making money in the game, this is the only enterprise that can lose gold at a higher rate of earning it. Another possible strategy here is to play with lighter opponents more often in order to get more stable wins.