Home Entertainment The Cult of the Lamb: A Guide to the Smugglers’ Sanctuary 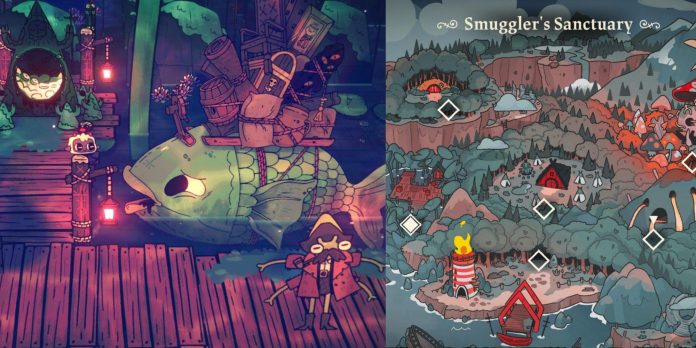 The cult of the Lamb is not just a complex of a cult and a land ruled by four bishops. There are several other places Lamb can visit to spread his message, and one of them is the dark little dock known as the Smugglers’ Sanctuary.

Sailor Plimbo is an NPC who lives in this secretive little cove, and while he seems to be alone, there are several other small and secretive residents in this quiet hideout that Lamb may encounter.

How to find a smuggler’s hideout

Lamb will meet Plimbo for the first time during a chance encounter in the dungeon of Ankordip. He will tell the Lamb that he has several unique and rare items available for exchange and resale, and mark a place on the map so that the Lamb can visit it after they finish the crusade.

Midas Ankordip is usually the third crusade that the Lamb goes on, and basically it’s about spending gold in the form of coins or bullion. It’s not a place to find raw materials, not even to buy, but the Lamb can gather Divine Inspiration from the little temple of Plimbo after everything else is sold out.

Shopping in the Sanctuary

There are no resources in the Sanctuary, such as seeds or wood, unlike other places. By this time, the Lamb should have a decent-sized cult and a fair amount of money to spend.

Stone kiosk. Every place in Cult of the Lamb has one of them where you can buy new follower forms. Which ones are available depends on the stage at which the Lamb reached his crusade. Tarot cards. There is also a kiosk with Tarot cards. If the Lamb finds certain items in the dungeon after seeing them here, the selection at the kiosk changes until they are sold out. A trade tent of drawings. Plimbo also sells drawings of new decorations and buildings for the cult complex. These are purely cosmetic decorations, but they can still improve the Faith, Devotion and overall happiness of cultists.

A guide to the smugglers’ hideout

Don’t be fooled by how lonely this place looks. There’s more to it than just Plimbo and the fish from his pirate ship. Many creatures, big, small, good and evil, are hiding in the dark shadows of the Sanctuary. The lamb has to come at a certain time of the day to find them all.

Plimbo and the Red Crown

Plimbo is not only a seller selling his goods by the sea. He also has several pieces of the Red Crown that the Lamb can use to strengthen his power and find new and more useful runes to wear while traversing dungeons.

The Eye of the Witness is a rare item that falls from some powerful bosses that wait at the end of almost every dungeon, and Plimbo will ask Lamb about it when they meet. The lamb gets one every time he kills one of these powerful enemies. There are four available for exchange at Plimbo, which makes one complete Crown and gives the Lamb another valuable fleece for the Crusade.

These secret quests are only available in the dark of night, and one of the main steps is available in the Smugglers’ Sanctuary. After sunset, go to the end of the pier to the right of the screen and select the action “Peer into the darkness”.

The wolf will rise from the muddy water and ask the Lamb for a sacrifice. What he asks for will depend on how many times the Lamb has already encountered this NPC, but it’s always something terrifying and disgusting. As long as the Lamb fulfills their desires, they will be rewarded with four pieces of the Red Crown and the form of a follower of the Wolf.

This is not what the player catches in a mini-game about fishing or finds in an Anchordeep. There’s a little crab running around the docks in the Smugglers’ Sanctuary, and it’s moving fast. If the Lamb manages to catch it, it unlocks the Crab follower form.

Most players don’t even know that this secret form exists until they find it. This is one of the many random secrets in the game that remain interesting even after all four elephants are defeated.

Unlock one of the hidden follower forms by honoring the secret temple of the adorable snail. Snail sanctuaries are simple pillars with statues of snails on top, and they are in all five places. Collect five shell fragments during the Crusades so that the Lamb can offer them to statues in every region, including the smugglers’ sanctuary.

The statue is located in the lower left corner of the screen in the Smugglers’ Sanctuary. Glowing red eyes make them more noticeable than simple jewelry. When the Lamb has shells in his inventory, the possibility of interacting with the shrine will be opened.