Home Entertainment The Cult of the Lamb: A Guide to fishing 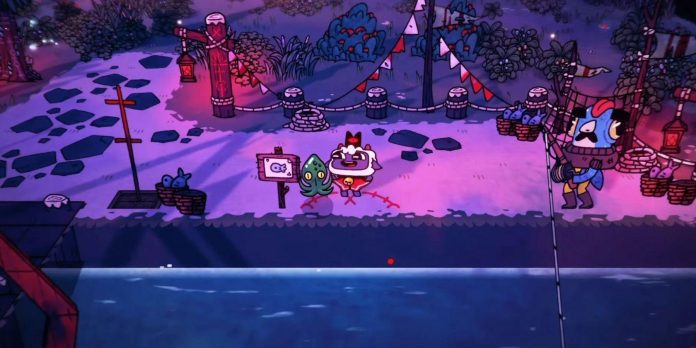 The cult of the Lamb is more than a massacre of heretics and sermons. There are many resources to collect, such as fish, which is an important ingredient for some of the healthiest dishes in the game. The first step to fishing in the “Cult of the Lamb” is to unlock a place for fishing.

This means that the player must meet an NPC known simply as the Fisherman. He can be found while exploring the Darkwood dungeon. A meeting with a Fisherman will open the Pilgrim’s Passage, where the player can quickly get from his Cult. The fisherman will be there and the player will be able to fish next to him.

The mini-game about fishing is quite simple. The player can throw the fish at different distances by holding the throw button for a short or long time. It is not known what kind of fish each silhouette has, but larger silhouettes are more likely to be rare.

As soon as a fish gets on the line (this will happen automatically), a counter will appear. Players will need to hold the hook on the color counter while it swings up and down. If they can do this long enough, the fish will be caught.

Every fish in the lamb cult

The lamb can catch nine types of fish, from common to rare. They are used in seven different types of food recipes. Four of these fish can also be given to a Fisherman. If he gets this particular fish, he rewards the player with a piece of the holy talisman, which can be used to get a special rune.

There is a doctrine specific to fishing. The player must level up the support doctrines to the third level and choose the “Ocean Bounty Ritual”. The ritual costs 75 bones and gives the Lamb more chances to catch rare fish and doubles the number of fish caught for each catch. The buff is valid for two days.

There is also a Tarot card in which fish participate. This is called the Curse of Neptune, and it gives the killed enemies a chance to throw the fish away. The card should be obtained when talking to the Fisherman for the second time. This card, however, will only be awarded to rare fish such as minnow and salmon.