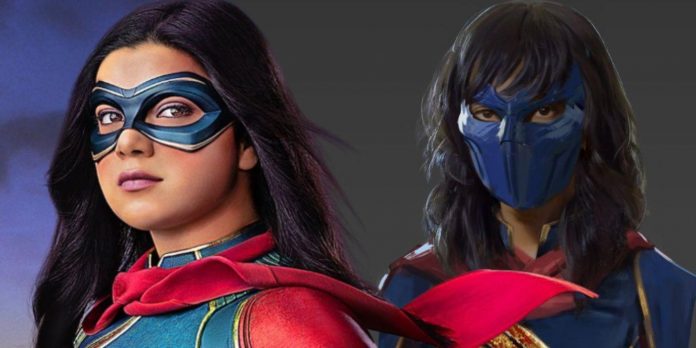 In the original Marvel comics, Kamala’s superhero costume was designed and created by herself from her clothes. Her best friend Bruno Carrelli then used her design as the basis for a revision to create a more flexible suit. This version of the costume became Kamala’s most recognizable outfit and the model for the MCU version of Miss Marvel. Although the origin of the bracelets, mask and costume differed from the comics, the TV series remained relatively faithful to Kamla’s original appearance.

Concept artist Mush Rizvi recently took to social media and shared early drawings of Ms. Marvel, showing several completely different designs of Kamala’s mask. Rizvi explained that she was tasked with designing some preliminary masks for Kamala that she could use before the character gets her final mask. The images show red masks inspired by Captain Marvel, with a mohawk and completely covering the face, which is more like what Brock Rumlow would wear/Crossbones or Taskmaster. Take a look at Rizvi’s early concept art below.

Since the sketches were the masks that Kamala had to use before getting her real mask and putting on her latest outfit, they were most likely not considered for the final approved appearance of Miss Marvel. Although the design of Ms. Marvel’s costume in the MCU is slightly different from the source material, her outfit still resembles her original costume from Marvel comics. A complete costume change would probably have caused a negative fan reaction to the show, although it still happened thanks to a minority of dissatisfied viewers.

While Miss Marvel fans were pleased with the news that Kamala Khan would be introduced to the MCU and get her own show, many comic book fans were disappointed by the massive change in her abilities. In the comics, Kamala gained her powers through the Terrigen Mist, which activated her Non-Human Genes. In the TV series, Kamala got her powers from enhanced bracelets, and later it turned out that Kamala is a mutant. If the series received such a strong reaction due to a significant change in her abilities, then a radical adjustment of the elements of the hero’s costume during her first appearance would certainly have contributed to a hostile reaction. However, Ms. Marvel retained the original aesthetic of Kamala’s comic book counterpart, which led to a long-awaited faithful recreation.