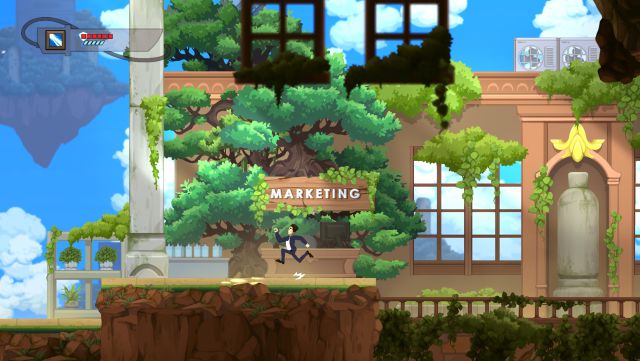 The Company Man: An indie game arrives from Malaysia with a very interesting visual approach and the satire of the current work culture as a backdrop; analysis in Switch. If there is a platform that is ideal for video games of an independent nature, especially arcade games, this is the Nintendo Switch. Not surprisingly, the eShop constantly receives little-known bets, little gems in the rough from small studios that deserve to be rescued. This is the case of the title that concerns us this time, The Company Man, a classic 2D-style action platformer with a truly striking visual aspect that aims to be a satire of the work culture of large corporations that, despite resorting to to the clichés of all life, he manages to deal with the matter with a certain grace through the most absurd situations. Now, after its original launch on PC in May 2021, luckily for fans of the genre in the hybrid of the Big N, it comes to Switch to Switch. Let’s see in our analysis if the debut title of the Malaysian Forust manages to carve a niche among grenade of old-school action platformers.

The Company Man tells us about the adventures of a small-time employee, Jim, in his ascension in the Aguaclara company, something for which he has been preparing for a long time to become the new CEO. And for that he will do whatever it takes. And by whatever it takes, we mean dishing out keyboard-wielding slashes, shooting powerful emails, or jumping between departments dodging all sorts of deadly traps. And it’s that good old Jim is betrayed by one of his colleagues, so he decides to take matters into his own hands and start rising through the departments of his company until he reaches the CEO. Along the way, of course, he will have to get rid of employees, interns and managers, something that will upset some and impress others.

All this through an absurd approach that aims to satire the typical tricks of pyramid companies; the famous “shark mind” applied to black humor. From there come the different characters and enemies that we will come across throughout the seven departments through which we will ascend until we reach the boss’s office. Fortunately, the mundane enemies and the final bosses of each level are quite interesting and original, both for their design and for their different attack mechanics. Especially the leaders of each level, from whom we will have to learn their attack mechanics and weak points, in the style of classic action platforms.

That yes, while the control of our impetuous Jim is acceptable -at the level of response and agility to the controls, with dash included and jumps of different heights and distances depending on the pressure of the button-, the hit boxes do not finish convincing, leaving A little aside the mastery in the control of our avatar to offer confrontations in which randomness seems almost decisive. Even so, we can dodge projectiles, attack from behind or shoot from afar quite easily. Although it’s time to address the less brilliant aspect of the title: the level design.