Home Entertainment The codenames of Nightwing and Tim Drake have a shocking significance in... 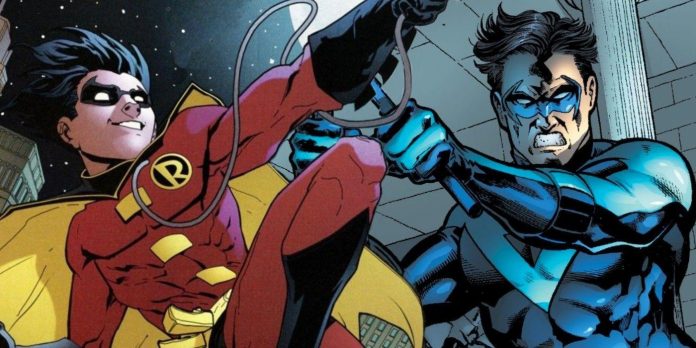 Once Batman was sent back in time with the help of the Darkseid omega effect, at this time he was marked by the space dragon Barbatos. Barbatos exists in the Dark Multiverse, a distorted evil version of the main universe, but he had plans to invade the main multiverse. To achieve these goals, he intended to use Batman as a portal allowing him to enter from the Dark Multiverse, which he succeeded in doing. However, this is not the only connection of a member of the bat family with a dragon.

Few people know why Dick Grayson actually chose the name Nightwing after he stopped being Robin. After he left Bruce, Dick tracked down Superman, and Superman told him the story of Nightwing, the Kryptonian god. In ACtion comics #886 and 888, written by Greg Raka, Eric Trautman and Pere Perez, readers learn that the Kryptonian Nightwing was a shadow dragon created by Rao to track down creatures in the dark that Rao could not see. This story, for obvious reasons, inspired Dick, and he took this name for himself. Tim Drake, on the other hand, his connection to the dragon is a little more straightforward and straightforward as his surname is Drake, which he also used as his vigilante name for a period of time. Both of them are related to dragons, but this goes even further.

Duke Thomas, although technically not Robin, is still a member of the bat family, and he too has a strange connection with dragons. On the pages of Tales from the Dark Multiverse: Dark Nights Metal by Scott Snyder, Jackson Lanzing, Collin Kelly and Carl Mostert, readers see Duke Thomas as the last hero of the dying Multiverse. He fights against the Justice League, who fell before the Barbatos and became monstrous dragons themselves. Batman himself turned into the Dragon of the End, which the Duke fights and actually kills, then the Duke takes off the skin and turns the dragon skin into powerful armor. Allow the Duke to become the last knight, as well as strengthen his bond with the dragons.

Including Batman’s connection to Barbatos, it shows that three other members of the Batfamily were also somehow connected to the dragons through their names or actions. Although it is unlikely that anything will ever come out of this connection, it is not impossible. The Court of Owls was the one who served Barbatos and also trained Batman to use Barbatos as a portal. The same Court of Owls also had a very personal connection and interest in Nightwing, as he was associated with the circus in which Nightwing grew up, and chose Nightwing to serve them with his Claw. If DC ever returns to this strange cosmic connection, it could definitely prove interesting for Nightwing, Tim Drake and Duke Thomas.

The Spanish government will give away a cultural bonus of 400...

Remake of Knights of the Old Republic May Be a Pipe...