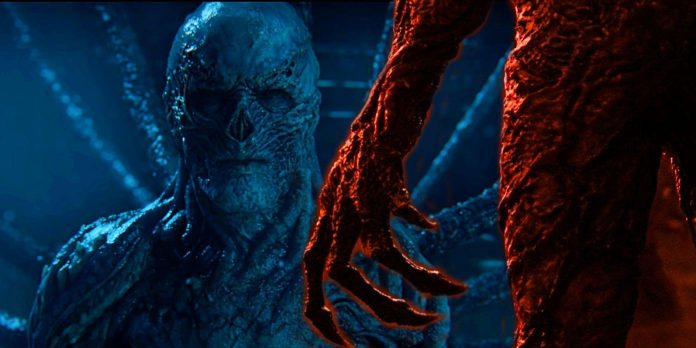 Stranger Things season 4 explains that newcomer villain Vecna (Jamie Campbell Bower) chooses traumatized victims, and one chilling theory explains why that is. Vecna was originally known as Henry Creel, or 001 at Hawkins Lab before the Upside Down corrupted and disfigured him. In season 4, Vecna targets four victims – not counting Nancy (Natalia Dyer) – to open a rift between the Upside Down and the Right Side Up. He’s successful in his mission until Eleven (Millie Bobby Brown) revives Max (Sadie Sink) before the Gate is completely formed. Nonetheless, Stranger Things season 4 ends on a cliffhanger by showing the Upside Down bleeding into the Right Side Up.

Season 4 revealed that Vecna was Stranger Things’ villain all along and essentially created the Upside Down as it exists now. Before his ’86 killings, he was responsible for the 1979 Hawkins Lab Massacre and killed his mother and sister twenty years prior. Before killing each victim, he psychologically haunts them with their traumatic pasts for days before psychically breaking their bones and gouging their eyes. The Hawkins Lab massacre victims were the only ones not psychologically tormented prior to their deaths, as Vecna was temporarily powerless to do so and killed them mainly to escape and get revenge. Vecna’s 1986 victims differ from his previous murders in that he doesn’t personally know any of them, which presents them only as tools for Vecna’s motives. Vecna’s murders are among the most gruesome killings Stranger Things has displayed thus far, with more to come in season 5.

It’s not entirely obvious why Vecna’s Stranger Things curse targets traumatized Hawkins teenagers in Stranger Things season 4. However, one theory (via Reddit) provides a plausible explanation that the show is very likely implying. Based on their presence in Vecna’s Mindscape, their death is more useful than perceived. Vecna explains in a villain monologue to Eleven at the end of season 4, episode 7 “The Massacre at Hawkins Lab” that he finds the rote, controlled structure of society to be imprisoning and disharmonizing, which he considers to be a prime flaw in humanity. However, this isn’t the only motivation for his 1986 murders. Vecna’s victims are fueling him and could be the answer to how powerful he will be in season 5.

Stranger Things’ Vecna can open an Upside Down portal at each murder site, with four portals eventually becoming one large Upside Down Gate. However, psychological iterations of the victims’ bodies remain in Vecna’s Mindscape. Whether the bodies are still there in Stranger Things after the Gate opened remains to be answered in season 5, but a few season 4 clues hint at why they were there in the first place. As the Reddit theory notes, Vecna states to Eleven about the power of sad, angry memories. Combined with the fact that Dr. Brenner (Matthew Modine) states in the Stranger Things episode “Papa” that Vecna “consumes” everything about his victims, Vecna targets traumatized victims because it builds for him a well of sad and angry memories to draw from. With each victim, he can become gradually more powerful.

It’s only by coincidence that Vecna targets Stranger Things’ Max for a future purpose. Otherwise, Stranger Things’ season 4 episode “The Monster and The Superhero” proves that Vecna is able to choose from an array of potential Hawkins victims before he latches onto Patrick McKinney (Myles Truitt). Vecna’s ’86 victims include Chrissy Cunningham (Grace Van Dien), who suffered from her mother’s body-shaming abuse. School newspaper reporter Fred Benson (Logan Riley Bruner) fled from a deadly car accident that continues to haunt him. Patrick was targeted due to his father’s abuse of him. Finally, Vecna targets Max for her trauma from witnessing Billy’s death and uses Barb’s (Shannon Purser) death as a way to use Nancy. If traumatic memories fuel Vecna’s powers and Vecna is able to choose his victims from a variety of traumatized people, then it stands to reason that Vecna decides which memories he’d like in his subconscious.

Looking at Vecna’s grand Stranger Things plan, it makes sense why traumatized victims would help him open the Upside Down Gate. It still doesn’t quite justify why he targets teenagers specifically. As shown when he was fishing for victims, Vecna can access the memories of adults as well. In fact, his first victim as a child was his adult mother – clearly, he’s more than capable of targeting them.

However, Vecna could possibly be targeting teenagers over adults because they’re easier for him to manipulate. Vecna requires his targets to be old enough to have a traumatic past, which explains why he tends to leave children alone. However, his teenage victims are at an age where they can be malleable under Vecna’s influence to do anything that he wishes. Vecna is still connected to Stranger Things’ Will (Noah Schnapp), whom he infiltrated as a child and kept alive into his teenage years, partly so that he’s better capable of potentially doing more complex things for Vecna. This isn’t to say that adults wouldn’t be terrified by Vecna’s psychological torments, but teenage victims are better positioned to be under an authority figure like Vecna. Vecna could technically bend adults to his will, but he likely finds teenagers to be a lot easier to scare and control.

However, the fact that his ’86 victims are all teenagers could be purely coincidental. Vecna chooses which memories he would like to have in his subconscious, and it’s only by chance that the victims he wishes to absorb are all Hawkins High students. It’s odd that all of his victims are teenagers, but there could be a deeper purpose for them going into Stranger Things season 5.

Why Vecna’s Victims Are In His Mindscape

Before Max escapes Vecna in Stranger Things’ “Dear Billy,” she finds herself in Vecna’s Mindscape. There, she sees the disfigured bodies of Chrissy and Fred held up by a system of thick vines. As Vecna’s Mindscape is separate from both the Upside Down and the Right Side Up, these aren’t the victims’ real bodies. They’re their essences – a representation of their very being. In Stranger Things’ “The Massacre at Hawkins Lab,” Vecna/001 clarifies that the massacre victims are “not gone” and are “still with [him].” Considering Brenner’s clarification that Vecna consumes his victims, Vecna stores his victims’ essences in his Mindscape for further use. In fact, his previous victims are not found in his Mindscape because he likely used their essences up entirely.

Vecna is better able to take over Hawkins after a few years of being in the Upside Down, now that he can form miniature portals. Max found Vecna’s ’86 victims in his Mindscape before the Gate was opened, but as they were there after their deaths formed the smaller gates suggests that there’s a possibility that they could still be with Vecna. Unless Vecna used up his victims’ essences to open the massive Gate, there’s nothing to prove that his victims were only good for opening portals. Only Stranger Things season 5 can clarify if this is true, but the probability remains of there being a bigger purpose for Vecna’s victims.

Final Fantasy 10 Should Get a Prequel, not a Remake