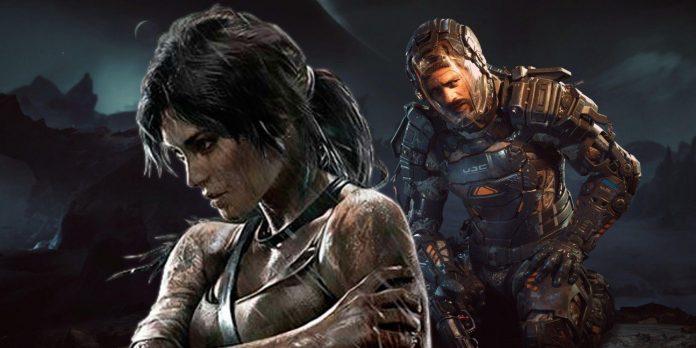 With each subsequent trailer that Striking Distance Studios releases for The Callisto Protocol, it seems that it is increasingly cementing itself as one of the most promising games of 2022. Scheduled for December 2, a brand new survival horror film seems to mix together nightmarish creatures, harsh inhospitable places and an ever-present sense of fear. Partly fueled by the brutal death animation that seems to be waiting at every turn whenever the player makes a mistake.

Although many of the deaths of the main character Jacob Lee were inspired by Dead Space, a series that the founders of the studio helped create, fans on the Internet pointed to several other explicit references. During the appearance of The Callisto Protocol at the Opening Night Live show at Gamescom, most of the trailer was occupied by a Tomb Raider-style slide. However, unlike the recently rebooted Lara Croft trilogy, this action-adventure-inspired mechanic and its gruesome content are much better suited to a horror genre game.

Throughout the latest Tomb Raider reboot trilogy from Crystal Dynamics, there is evidence that the studio was determined to modernize large parts of the game mechanics of the cult franchise. It is for this reason that fans were able to draw parallels between it and other popular modern action adventure films, such as the Uncharted series from Naughty Dog. However, one of the concepts that the studio apparently stopped at an early stage and relied on in every part was the concept of the slide section.

In certain sections of each of the last three main Tomb Raider games, Lara Croft will fall down a landslide, river or other steep slope. Players will have to navigate through the wreckage, which is often also found on the way, shooting at obstacles and enemies. Failure to avoid enough of these obstacles most often leads to the fact that the hero of the franchise is brutally impaled or killed. Each death not only prompts a more cautious approach in future journeys through these sections, but is also a sudden wake-up call to the brutality of the Tomb Raider universe.

A terrible execution in Tomb Raider

Although each of the sections of the Crystal Dynamics slides was designed with the use of modern technologies in mind, they all serve to further emphasize how outdated parts of the Tomb Raider formula have become. Throughout the franchise, there is no denying that Lara Croft has experienced many violent deaths. Since her debut on PS1 and Sega Saturn in 1996, a simple “game over” screen has never been enough for the long list of studios behind her adventures.

None of this changes the fact that the Crystal Dynamics slide sections and the brutal deaths for which they were apparently created seem dramatically out of place in a modern adventure game. Although the recent Tomb Raider trilogy was presented as a harsh saga about Lara’s growing up, these sections do not add anything of value to the hero’s journey. Functionally, all they really do is move the action to another location. In any case, it’s easy to imagine the slides as remnants of the time when Crystal Dynamics was thinking of turning the series into a real survival horror.

In a sense, the original concept of “Tomb Raider” from Crystal Dynamics is where the “Callisto Protocol” comes into play. For several reasons, it’s easy to see that the slide section concept and all the pitfalls associated with it are much better suited for the game. it’s all about avoiding a brutal murder by everyone and everyone. It’s for this reason that it’s no surprise that Striking Distance Studios showed off their own version of the concept during their latest Gamescom trailer.

After introducing a new tentacle-based enemy in the video, the studio decided to cast its protagonist into one of its own slide creations before ending the trailer with an animation of death that can only be briefly described as visceral. Only in terms of mechanics, this part of The Callisto Protocol seems like a step forward compared to Tomb Raider using the same idea, and these fast-flowing distractions undoubtedly fuel the fear that players will experience during the game. .

In general, annoying concepts are often more effective in horror games because they confuse the player and never really make him feel comfortable. As in the Dead Space series, violent deaths like the one shown in the slide section are also a key part of The Callisto Protocol’s attempts to throw the game’s audience off balance. Given that players will be expecting their own demise, confirming them with graphic animation makes their presence more appropriate than their appearance in the aforementioned adventure series.

The first Hellraiser images from Hulu have appeared