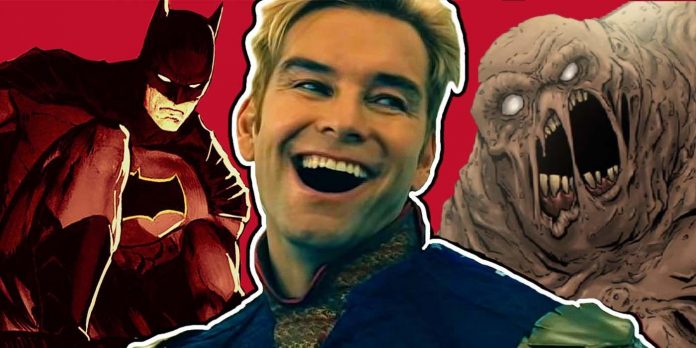 Warning! Spoilers for the comic book and TV series The Boys!

Few characters are more disgusting and have an R rating in The Boys universe than Coagula, one of the crooks from Black Noir, who is a terrifying parody of the Gotham City villain Maxi Zeus. In the arch of Herogasm in the comic book series The Boys, readers are introduced to a villain who seems to have a repulsive suit of skinned skin, as he believes he exists as a Roman ruler.

In the comic book series The Boys, the fake origin of Black Noir, created by Vought-American, makes the general public believe that he has the darkest villains. Noir’s backstory is reminiscent of Batman, as he was created as a native of the worst city with the worst villains, including several that seemed to be direct parodies of the bad guys of Gotham City. Although the origin of Black Noir is completely fake, since he actually turned out to be a Homelander clone, one of his opponents remains one of the most disgusting R-rated villains featured in the comic.

In The Boys: Herogasm #3, Garth Ennis, John McCree, Keith Burns, Simon Bowland, Tony Avina and Darik Robertson show the depraved antics of Supes during their mass party. While the general public believes that the heroes are fighting in a crisis situation, in fact they are taking part in a depraved orgy known as Gerogasm. One of the rudest R—rated characters to appear in this event is Coagula, a hideous villain from Black Noir who wears skinned clothes thinking he is in Ancient Rome. Coagula lives in the darkest and most forbidden corners of Gerogasm, having started his career with a suit made of the dirtiest materials imaginable.

The R-rated villain from The Boys parodies the Batman-related DC comics villain, as Coagula is a rougher version of Maxi Zeus. The original villain is a former history professor who goes crazy after the death of his wife, which leads him to believe that he is actually a Greek god. Like Maxi Zeus, Coagula believes that he is connected to ancient Rome, which connects the fake origin of Black Noir with Batman in one of the most disgusting ways imaginable. Coagula is, in fact, Maxi Zeus, if he lost control even more and became a monster, since the skins stripped from his chest cause vomiting.

Thanks to his obsessive nature and strong theme, the R-rated villain and his skinned suit would really fit into Batman’s Gotham, albeit as one of the most disgusting creations ever to exist in the DC comics world. After all, the Black Noir villain is parodying Maxie Zeus, greatly increasing the gross factor, as he plays an important role in hiding the truth about Black Noir, forcing the superhero’s public persona to behave unpleasantly, few people ask questions about his true nature and origin. In his only appearance, Coagula showed how disgusting villains can be in the Boys’ universe.