Home Entertainment The Boys: 10 Memes that Perfectly Describe Huey as a Character 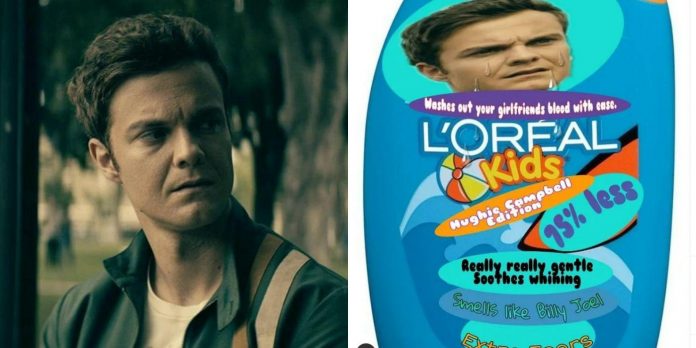 Warning: This article contains spoilers for The Boys season 3.

As the end of The Boys season 3 looms on the horizon, Hughie’s journey is taking him to dark new places – now that he has teleporting superpowers. From a burgeoning dependency on V sparked by his insecurities to the crumbling of his relationship with Annie, whatever is in store for Hughie is sure to be harrowing.

The emotional heart of the show, Hughie leads the cast in his wholesome wish to take care of anyone harmed by supes, hence why he took the temporary V in the first place. As Hughie finally finds his confidence, there are memes about him that describe the more caring and harmless self that fans loved about him.

Hughie doesn’t always make the right choice, but whatever he does is almost always from a place of good intentions. There are some notable exceptions, especially in seasons 2 and 3, like some of his interactions with A-Train. From the first episode, all Hughie really wanted was accountability, yet at every turn, it seemed the world grew darker around him.

RELATED: 8 The Boys Memes That Perfectly Sum Up The Show

He’s the softy who uses L’Oreal Kids shampoo and naively sees the best in everyone. At times, he’s even helped those around him choose to do good, like when Butcher is convinced to step in and save Hughie from Homelander instead of leaving him to die. It’s no wonder Hughie is one of the best characters in The Boys.

Regularly drawing comfort from Billy Joel’s music, Hughie’s other childhood hero is featured regularly on the show. It wasn’t until season two that we learned where this love stems from. In the season 2 finale, Hughie reveals to Starlight that before his mother left him and his father, she would have Billy Joel dance parties with baby Hughie.

These fond memories serve both as a comfort to Hughie, and an inspiration for his dedication to the people he loves. It’s a touching moment that adds a lot of heart to an otherwise funny character quirk.

From the jump, Butcher and Hughie have had a tense relationship. Hughie has never taken to Butcher’s harsh view of the world, and they’ve even come to blows several times. Butcher manipulated and lied to gain Hughie’s help when he needed it, despite Hughie just wanting to move on.

As much as their opinions may diverge on some issues, they’re being pulled together by the same desires to stop Vought and protect the people they love. Now that they’re both juicing up and using temporary superpowers to try and fight back, there are sure to be adverse side effects in their already fraught relationship.

His Relationship With His Dad

Anytime Simon Pegg appears on screen, it is a delight for the audience. Many fans know that he was the original inspiration for creating Hughie, and it’s a special treat to have him portray Hugh Campbell Sr. This worrisome father just wants to make sure his son is okay, which makes it hard for Hughie to make excuses and keep a distance.

Though he’s made less frequent appearances in the latest season, the father-son relationship remains a sweet recurring touchstone that keeps Hughie grounded. With the distance Hughie has put in place to protect his father, it’s clear the two still mean a lot to one another.

In a world drawn from one of the darkest comic books, The Boys universe is one where it’s hard to believe anything good can last. It’s largely devoid of romance, but Hughie’s “second wind” speech where he confesses to Annie the dark place he’s been in by drawing a connection between himself and the boy in Billy Joel’s “You’re Only Human (Second Wind)” music video is heartfelt, sweeping, and earnest. It highlight’s Hughie’s romanticism, and how caught up he has gotten in his relationship with Annie.

Despite suffering a terrible loss with Robin’s death, Hughie found the strength to pick himself up and carry on, and Annie has helped him see that there’s still good in the world. It’s clear that Hughie has a longing for companionship, probably stemming from his worries of abandonment due to his own mother leaving him. In spite of everything, he still believes in love.

What Is Hughie Up To

More often than not, Hughie and Annie (aka Starlight) run into each other on jobs coming from opposite directions despite being on the same team. Many times, Annie has arrived on the scene to find Hughie in danger, or very near to it much to her dismay, and he usually tries to lie his way out of the obvious.

Hughie keeping secrets and lying to Annie has been a recurring issue for the couple. In the latest episode, the two seem to have permanently parted ways after Hughie confesses he’s insecure about the power gap between the two. Though wanting to protect the people he loves is a noble desire, and far from the worst thing Hughie has done in The Boys, he has time and again shown that this need is getting the best of him. Annie has stated she doesn’t need protecting one too many times.

How The Team Feels About Hughie

Every one of the Boys has a complex relationship with each other, but it’s part of what makes them so compelling to watch. Butcher and M.M. go way back, and their history isn’t always a happy one; the same goes for Frenchie. Then there’s Butcher’s hatred for Kimiko based purely on her powers. Kimiko and Frenchie have a sweet tentative romance, with many complications.

Though most of the team see Hughie as a bumbling fool, who wreaks more havoc than he does help, their shared experiences keep bringing them all closer. Just like when M.M. climbs back into the dead whale carcass to pull Hughie out of his gloom, the team is going to be there for him because they’re all in this together now. It’s clear they care for one another, even if they don’t always get along.

Understandably, Hughie has had a very hard time coming to terms with the very incident that brought him into this frightening world of supes and their enemies. Robin’s death in the first episode is shocking and heartbreaking, and it leaves Hughie with PTSD and a vendetta.

This singular tragedy permeates much of Hughie’s arc in the show. Even now, in the latest episode “Herogasm,” Hughie confronts A-Train again, but this time he finally gets an earnest apology. In a move that goes against his personality, Hughie punches A-Train. It’s not enough for Hughie at this point, which begs the question of anything will.

Though fans don’t get to see much of playful Hughie after Robin’s death, he clearly has a funny side. This iconic line from the first episode can be found on all sorts of Hughie-related content.

Much of his comedic contribution to the show is accidental, be it constantly getting soaked in viscera or teased by his friends. Still, as he continues his journey, his wise-cracking side makes occasional appearances, especially when he’s with Annie.

Debatably, Hughie makes bad choices pretty regularly. This is a perfect illustration of that penchant for chaos. Though in some ways he was emotionally pushed onto the path he now walks, he’s had plenty of chances to try and go back to a more ordinary life.  Beyond that though, he continually makes some questionable decisions.

From lying to Annie and using Compound V with Butcher to confronting A-Train, it seems Hughie’s judgment is growing poorer in each episode. Hopefully, he’ll be able to turn it around when he sees the possible harm this road could do.

The WhatsApp Icon With The Color Of Women’s Day: How To...